The Effects of Deforestation on Our Environment

Deforestation can cause many societal and environmental problems which can make our lives on earth even more challenging. Some of these challenges include: loss of biodiversity, the destruction of forest- based societies and climatic disruption. According to the 1992 United Nations Earth Summit in Rio Janeiro, biodiversity may be defined as, “the variability among living organisms from all sources including, inter alia, terrestrial, marine and other aquatic ecosystems and the ecological complexes of which they are a part.

Although tropical forests Cover only six percent of Earth’s land surface; it is alleged that they contain between 70% and 90% of the world’s entire species.

Don't use plagiarized sources. Get your custom essay on
“ The Effects of Deforestation on Our Environment ”
Get custom paper
NEW! smart matching with writer

It has been documented that as a result of deforestation, we have been losing between 50 and 100 animal and plant species each day. Many of these species that are now on the brink of extinction are of significant importance to humans, especially in the area of medicine. Continued obliteration of our various plants and animals will ultimately lead to obliterating the cures for many of the diseases that afflict us today.

Additionally, the destruction of tropical forests will also lead to the destruction of tribal populations. Aboriginal people worldwide have had their land confiscated by governments and industries in the name of ‘development’. Even if forest dwellers are compensated for this loss, they are still left in shock by the invasion of industrial culture on their once simple lives. Soil erosion is another consequence of deforestation. Although these forests appear to be flourishing, the soils beneath are very poor.

The problem is that once forests have been cut down, crucial nutrients are washed out of the soil completely. This leads to soil erosion. When there are no trees to keep the soil in place, it dries and cracks under the sun’s heat. If the soil temperature exceeds 25 degrees centigrade, explosive nutrient ingredients like nitrogen can be lost, reducing the fertility of the remaining soil further. Moreover, rainfall washes remaining nutrients into rivers; as a result, replanting trees would not really help to solve the problems of deforestation.

By the time trees have matured, the soil might be completely stripped of important nutrients. The land would therefore become useless. The social effect of soil erosion can be quite disturbing. Those who settle into the forest regions are moved to move frequently due to soil erosion. They find fertile areas where they can cultivate. When these areas are no longer good for growing, they move to another area. Flooding is another serious impact of deforestation.

Clearing the forest considerably increases the surface run- off from rainfall, chiefly because a greater amount of the rain reaches the ground due to a lack of vegetation which would suck up the excess rainfall. In tropical regions where the forests are dense, flooding is not a serious problem because there is vegetation to absorb the rainfall. A problem occurs in areas where there is little rainfall. In order to avoid the disastrous effects of flooding, it is important that tropical forests remain dense and lush.

The Effects of Deforestation on Our Environment. (2016, Dec 18). Retrieved from https://studymoose.com/the-effects-of-deforestation-on-our-environment-essay 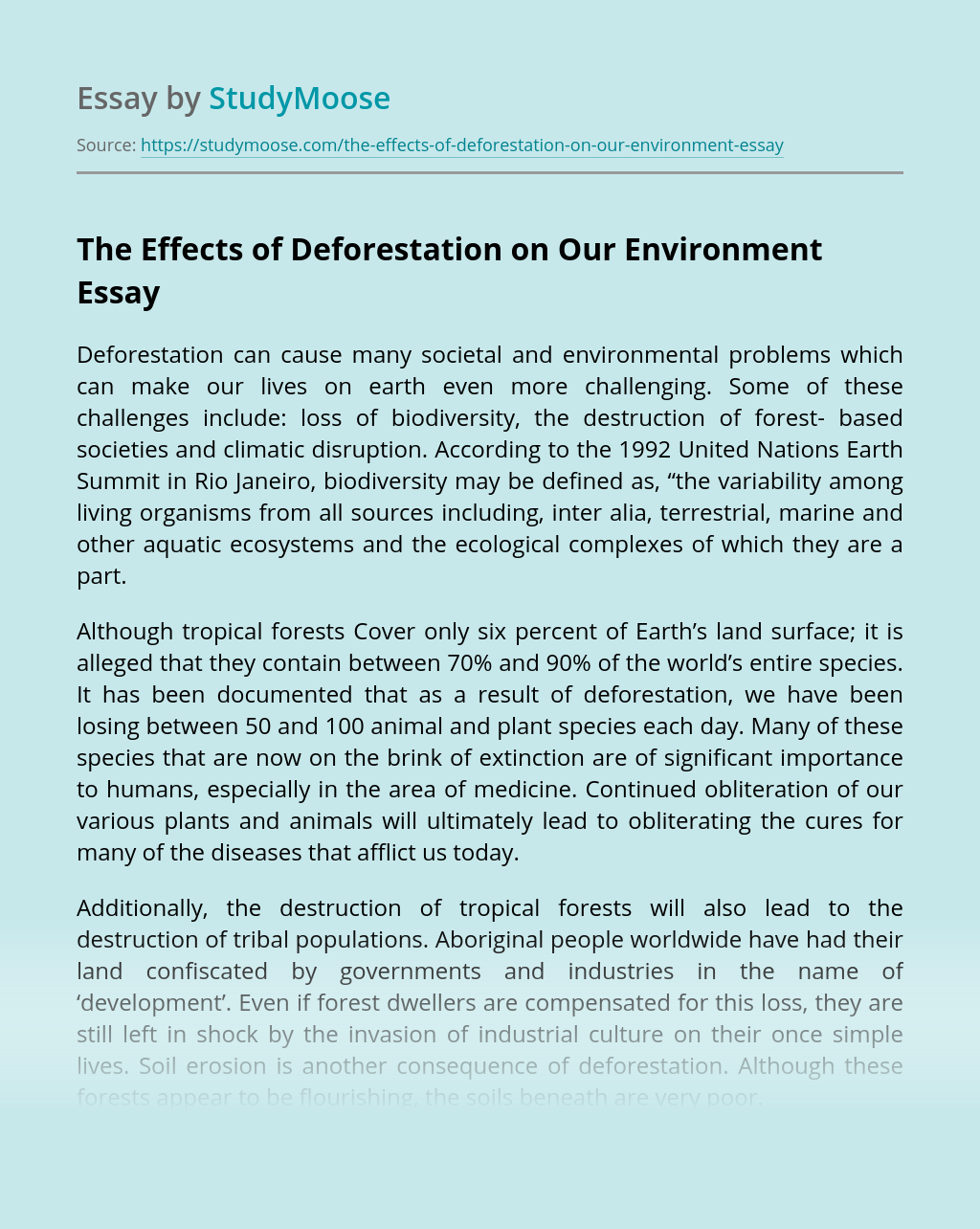