The Effects of Alcohol on the Human Body

Introduction Today, alcohol is one of the most common substances that people abuse. It is an addictive drink that has become a popular way of having a good time or relaxing in social gatherings. It is among the most commonly used psychoactive drugs. Alcohol is a popular social phenomenon, yet most societies forget its effects on their bodies. Research has carried out in the recent years on the effects that alcohol consumption is having on people. The resulting data has been extremely negative.

Don't use plagiarized sources. Get your custom essay on
“ The Effects of Alcohol on the Human Body ”
Get custom paper
NEW! smart matching with writer

The introduction of Alco pops’, led to a substantial increase in the youth population drinking alcoholic beverages.

On average, young people start drinking at approximately age thirteen. Parental and peer influences are a major factor in these early habits. Before the legal age of 21; almost seventy percent of people manage to get away with at least one alcoholic drink. This increases the probability of adolescent consumption in the future. Alcohol, specifically ethanol, depresses the central nervous system and it has many side-effects.

Cell membranes in the human body have high permeability to alcohol, so alcohol diffuses into nearly every biological tissue of the body once it gets into the blood stream (Dasgupta 2011, pg.88).

It starts affecting the body and mind from the second one sips it. After taking it for a while, one starts feeling more sociable, but drinking too much makes basic human functions like walking or talking harder. One might start saying things they don’t mean and behave out of character. Some of the effects of alcohol disappear overnight, while others stay longer or become permanent.

Other effects are impaired judgment, addiction, poor mental health, hormonal change and withdraw as a result of deciding to quit.

Alcohol affects most important organs within the human body. Alcohol interacts with the gamma amino butyric acid receptors located in the brain. These receptors are the center of inhibitory neurotransmission in the human body and is synthesized from glutamic acid (Miller 2006, pg. 23). First and foremost, it depresses the brain tissue, the nervous system and destroys brain cells. The problem with destroying brain cells is that, once lost they cannot be regenerated. Excessive drinking over a long period of time may cause severe problems to one’s memory and cognition.

Alcohol affects parts of the brain like the cerebral cortex; limbic system; cerebellum and the hypothalamus. The cerebral cortex is the center of voluntary muscle movement and it processes one’s thoughts and senses. Once inhabited by alcohol, it slows down our bodies on reaction time and impairs judgment. This makes an intoxicated person more talkative and confident. Also in the cerebral cortex, alcohol increases the pain threshold. It affects the hippocampus as it impairs memory and causes inflated feelings (Miller 2006, pg. 48). The limbic system controls emotions and memory.

Alcoholic effects on the limbic system occur when the intoxicated person endures memory loss and uncontrolled emotional outbursts. The cerebellum controls the body’s muscular movements. When it is affected by alcohol there is involuntary muscle movement and incoordination. The hypothalamus controls the body’s automatic functions and release of hormones. Alcohol affects the hypothalamus through sexual performance and arousal (Brigg 2010, pg. 71). An intoxicated person is more sexually aroused, though the performance is not as normal. The liver can fairly process alcohol safely when the drinking is moderate.

Alcohol abuse is a major contributing factor in cancers, including mouth cancer and liver cancer, which are both on the increase. Alcohol comes second to smoking as risk factors for digestive tract and oral cancers. Research suggests that this happens since alcohol breaks down into a substance called acetaldehyde. This substance then binds to proteins in the mouth triggering an inflammatory response from the body. In severe cases, cancerous cells eventually develop. Alcohol alters the chemistry within the brain and increases depression risk. It is associated with various mental health problems.

People suffering from either anxiety or depression are twice likely to be heavy or addicted drinkers. Extreme drinking levels may often cause psychosis. This is a severe mental illness that causes development of hallucinations and delusions of persecution. Psychotic symptoms may also occur when heavy drinkers suddenly decide to stop drinking and as a result develop a condition referred to as ‘delirium tremens’. Moderate drinking does not suppress food intake. It may actually increase appetite. Heavy alcohol consumption has an opposite effect. It causes euphoria, which leads to lack of appetite.

As a result, heavy drinkers often eat poorly and get malnourished. Alcohol contains seven calories per gram thus is rich in energy. However, just like fat or pure sugar, these calories lack nutrients. The more calories consumed in alcohol make it hard for the drinker to eat enough food to get enough nutrients. Worse still, alcohol abuse displaces calories from required nutrients and interferes with metabolism of nutrients in the body. This damages the liver, the digestive system and most every bodily organ. Alcohol irritates and disturbs the stomach.

Therefore, heavy drinking may easily cause nausea, diarrhea and also sickness. Alcohol also has a dehydrating effect (Newell 2004, pg. 39). This is one reason why heavy drinking may lead to a severe pounding headache the next morning. Hydration also determines the extent of a hangover. After drinking heavily, unconsciousness may occur and extreme consumption levels often lead to alcohol poisoning. Death can also occur in a situation where alcohol concentration within the blood stream is more than the blood. Alcohol may also cause death when there is asphyxiation from vomit (Haven 2001, pg.43).

Drinking too much alcohol is not good for your skin either. It causes dark circles under a person’s eyes and bloating. It also dries out the human skin and may lead to premature aging and wrinkling. Drinking heavily may cause acne rosacea (Taylor 2000, pg. 70). This is a skin disorder which starts with likelihood to blush and flush and eventually progresses to facial disfiguration known as rhinophyma. Conclusion Use of alcohol is a great, enjoyable and safe experience if used moderately and with caution. If one does decide to drink they should drink slowly and responsibly.

A drinking person should always consume alcohol with food. A person should drink no more than one drink in an hour. Consuming plenty of water in between drinks is also very important and helpful. Pregnant women should not drink and also one should not drive under any alcoholic influence whatsoever. Mild and moderate alcohol use benefits the coronary system (Newell 2004, pg. 98). Generally, for healthy people, moderate alcohol is considered as one drink a day for women and around less than three drinks a day for men. This is considered the maximum advised amount of alcohol consumption.

Healthy people refer to those women who are not pregnant, people who are not addicted to alcohol and without any pre-existing medical conditions. However, the quantity of alcohol safely consumed by an individual is highly personal and dependent on genetics, family history, sex, weight and age (Taylor 2000, pg. 79). References Brigg, J. 2010. The Practitioner, Volume 5. California: University of California. Dasgupta, A. 2011. The Science of Drinking: How Alcohol Affects Your Body and Mind. Boston: Rowman & Littlefield. Haven Emerson, G. N. 2001. Alcohol and Man. New York: Ayer Publishing. Henry Newell Martin, H.

C. 2004. The human body: a beginner’s text-book of anatomy, physiology and hygiene : with directions for illustrating important facts of man’s anatomy from that of the lower animals, and with special references to the effects of alcoholic and other stimulants, and. New York: Henry Holt and Company. Horsley, S. V. 2008. Alcohol and the human body . London: Macmillan. Miller, M. W. 2006. Brain Development: Normal Processes And the Effects of Alcohol And Nicotine. Oxford: Oxford University Press. Taylor, B. 2000. Everything You Need to Know About Alcohol. New York: The Rosen Publishing Group.

The Effects of Alcohol on the Human Body. (2017, Feb 25). Retrieved from https://studymoose.com/the-effects-of-alcohol-on-the-human-body-essay 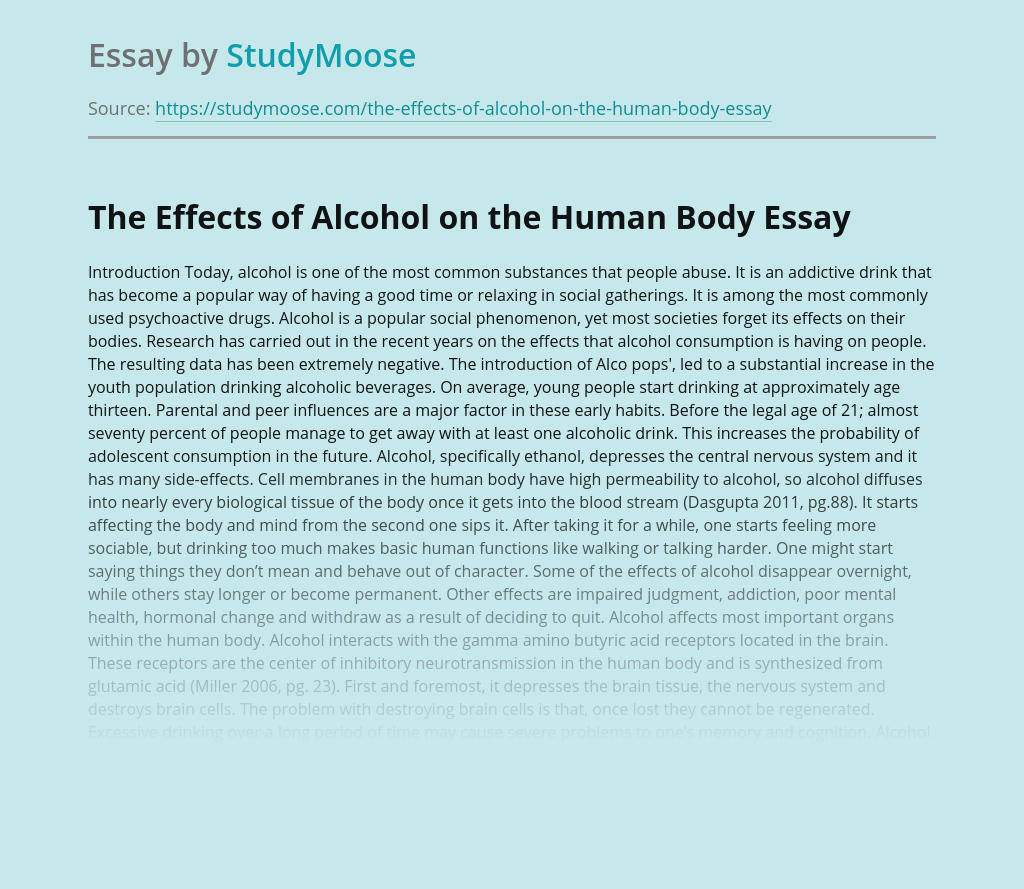