Caffeine and its effects on the human body

Don't use plagiarized sources. Get your custom essay on
“ Caffeine and its effects on the human body ”
Get custom paper
NEW! smart matching with writer

Many facts are known about caffeine, such as its composition, effect on the human body, and origin; however, there are many long term effects that are currently being studied in order to discover how harmful this substance truly is. [Caffeine- Neuroscience for Kids]

Caffeine occurs naturally from the coffee tree indigenous to Ethiopia, and it may have been used as early as 850 AD in Upper Egypt, though it is considered a legend.

Coffee is the seed of a cherry from the tree of the genus Coffea. The tree yields about one kilogram of coffee per year. There are over 25 different species of coffee, the three main ones being Robusta, Libaria, and Arabica. The Ethiopians mixed crushed dried coffee beans with rolled fat balls used as food on journeys. Its cultivation and use as a beverage occurred in Arabia. By the early 16th century, the beverage was well-established in the Islamic world.

Through cultural diffusion, coffee was a fashionable drug of the 17th and 18th centuries. From thereon, coffee’s popularity grew tremendously. America owes its present day coffee habits to the Boston tea party of 1773, which made coffee’s availability easier. [Owen, Daniel]

Caffeine is an organic substance medically known as trimethylxanthine, and its chemical formula is C8H10N4O2. Caffeine is an alkaloid. There are numerous alkaloids. These compounds have different biochemical effects, and are present in different ratios in different plant sources. These compounds are very similar and differ only by the presence of methyl groups in two positions of the chemical structure. They are easily oxidized to uric acid and other methyluric acids, which are also similar in chemical structure .Pure caffeine is odorless and has a bitter taste. This chemical is a useful cardiac stimulant and mild diuretic substance, or increases urine production. Many people take advantage of its energizing sensation; hence, it has become the world’s most widely used drug. Caffeine increases dopamine levels, like cocaine and heroin but to a lower extent. Dopamine is a neurotransmitter in specific parts of the brain that can activate pleasure sensations. Because caffeine belongs to the xanthine chemical group, it interferes with the production of adenosine in the brain. Xanthenes are yellow crystalline organic compounds that are soluble in ether and are used as a fungicide and in organic synthesis.

Adenosine is a naturally occurring xanthine used as a neurotransmitter in the brain. Adenosine binding to the brain causes slowing down of the nerve cells and drowsiness. Caffeine is very similar to adenosine, since they are from the xanthine chemical group. Caffeine interferes with the binding of adenosine because nerve cells recognize the intruding caffeine as adenosine. When caffeine binds to the receptors, nerve cells speed up. Caffeine causes the brain’s blood vessels to constrict because it blocks the adenosine’s ability to open them up. When the caffeine blocks the adenosine, neurons start firing at an accelerated pace.

Henceforth, the brain’s signals help to other body parts, causing them to react. The pituitary gland reacts to the signals of excessive neural activity and sees it as an emergency. It then releases hormones that stimulate the adrenal glands. The adrenal glands then produce adrenaline thought out the body, Adrenaline is a hormone secreted by the adrenal medulla in response to stress and it stimulates autonomic nerve action. Adrenaline causes: dilation of the pupils, expansion of respiratory tubes, an increase in heart rate and blood pressure, tightening of muscles in order to make them ready for action, a release of sugar by the liver into the bloodstream for extra sugar, and increase blood flow to muscles. The euphoric feeling induced by caffeine makes the chemical addictive to its consumers. [“Caffeine,” Microsoft® Encarta® Online Encyclopedia 2004]

Caffeine, like any other drug, is addictive. The long term effects of caffeine are unhealthy as they change the natural chemistry of the brain, primarily sleep. Adenosine is important to deep sleep because it causes proper reactions in the brain during sleep, yet caffeine interrupts its function. The half-life of caffeine in a human body is about six hours long, meaning that for six hours the consumer’s body and brain will be in an accelerated state. This can tire the body, especially the heart, which has to keep up in speed to pump the necessary blood throughout the body. After months of use, a person who consumes caffeine may develop a dependency on the drug because his/her body has grown accustomed to being stimulated by the foreign substance. Withdrawal symptoms are common among caffeine consumers, which is a body’s way to ask for caffeine.

Headaches, stomach cramps, irritation, and depression are common symptoms of caffeine withdrawal. These symptoms can occur within 24 hours after the last dose of caffeine. In huge doses, caffeine is lethal. A fatal dose of caffeine has been calculated to be more than 10 grams (about 170 mg/kg body weight) – this is the same as drinking 80 to 100 cups of coffee in rapid succession. Like many other chemicals, caffeine is deadly in large doses. [Caffeine- Neuroscience for Kids]

There are many harmful effects which caffeine is blamed for, but there is no solid proof of most of the accusations. Pediatricians and Nutritionists argue that caffeine is harmful to developing individuals, mainly children and adolescents. They think that by using caffeine, the developing individuals are upsetting the normal and natural balances of neurochemistry. Withdrawal shows that there has been a disturbance in the brain since the brain rewires itself to crave the caffeine. In addition, a study published by the New England Journal of Medicine found the effects of caffeine on pregnant women. The equivalent of one to three cups of coffee increases the risk of miscarriage of pregnant women by 30%. Consumption of three to five cups increases the risk by 40%. The study was directed by Dr. Sven Cnattilgils involved 562 women between six to twelve weeks of pregnancy. After the publication of the study in 2002, the Food and Drug Administration (FDA) and the March of Dime, which finds research on birth defects, have advised pregnant women to avoid caffeine. There were several other studies made with regard to infertility in women between 1987 and 1990 by the Centers for Disease Control and Harvard University.

They found that caffeine had little or no influence in infertility. Caffeine has also been linked to calcium loss in bones, yet its effects are not strong enough to be considered dangerous by the FDA. Aside from the negative aspects of caffeine, the drug is used in prescription and nonprescription drugs because it boosts their power. Aspirin and other painkillers contain caffeine to improve its effectiveness. Furthermore, a study by the Journal of the American Medical association suggests that consuming caffeine may help prevent Parkinson’s disease.

Parkinson’ disease is a progressive nervous disease happening most often after the age of 50, associated with the destruction of brain cells that produce dopamine and characterized by weakness, muscular tremor, slowing of movement, and partial facial paralysis. Apparently, caffeine reduces the neurotransmitters, such as glutamate, which can kill neurons under certain conditions the same way it reduces adenosine. Caffeine also increases the levels of dopamine in the body, which are destroyed by Parkinson’s disease. Caffeine can also be used to treat asthma attacks as it stimulates the production of adrenaline, causing the respiratory muscles to expand. [Cherniske, Stephen & Weinberg,B.A]

In summary, caffeine is the world’s most widely used drug for a reason. It triggers pleasure areas in the brain that cause its user feelings of elation. However, using caffeine in excess or for a prolonged amount of time can be hazardous to health by causing problems such as birth defects, miscarriages, and the body’s dependence. Though there are no concrete studies on the neurological effects of caffeine, many doctors and scientists agree that caffeine is not as safe as it appears. They recommend that consumers be careful of how much caffeine they are using or possibly abusing, since health is too precious to ignore.

Caffeine and its effects on the human body. (2016, Jul 15). Retrieved from https://studymoose.com/caffeine-and-its-effects-on-the-human-body-essay 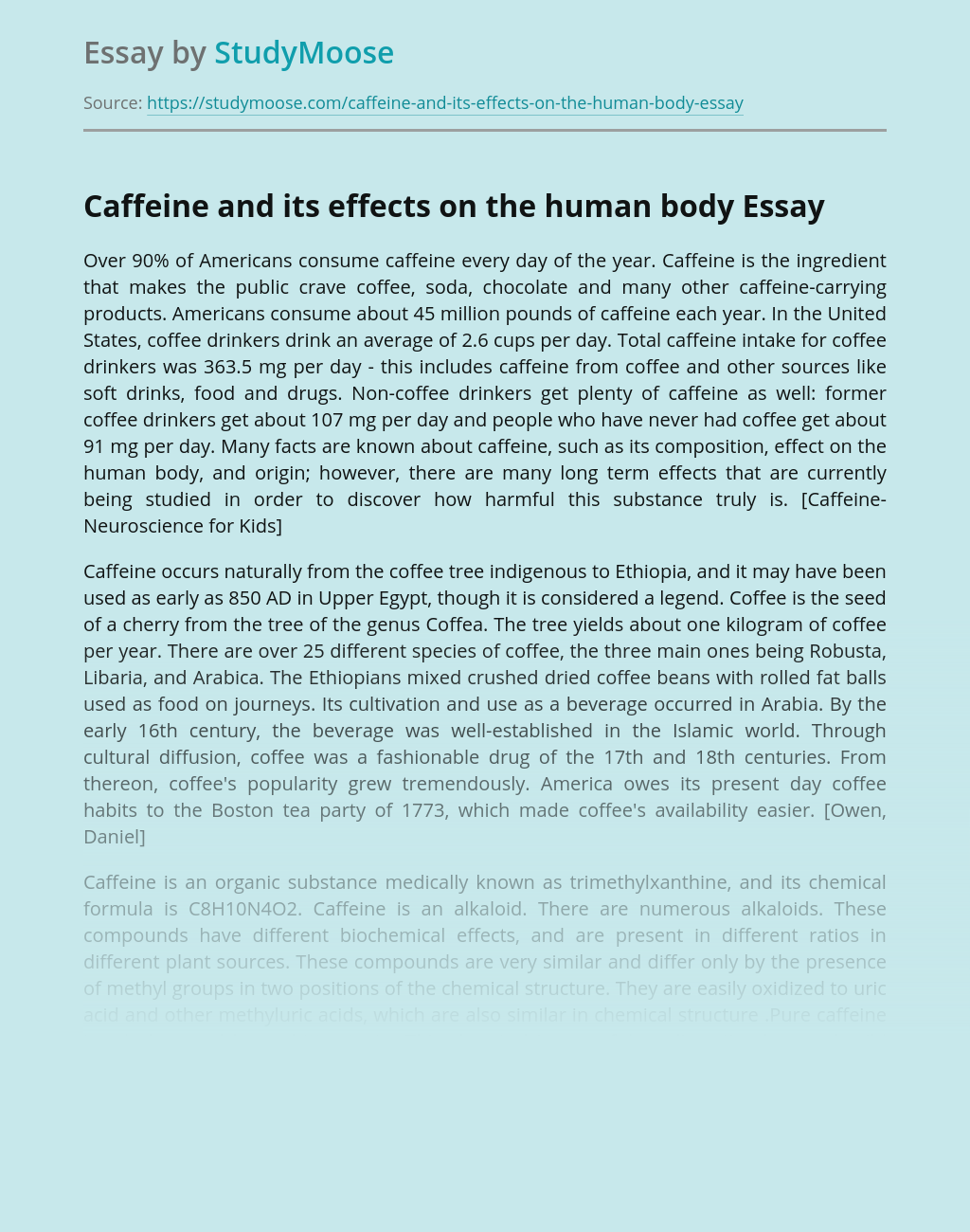