The Effect of Coca-Cola Advertising

Statistics indicate that obesity and other lifestyle diseases are becoming a major concern in the Australian community. The Government has discussed several actions to reduce these health issues as there could be several reasons for this happening. However, television advertising of junk food has been identified as a key contributor to the increasing prevalence of these conditions and is something that needs to be dealt with. Coca-Cola is a carbonated soft drink sold in many restaurants, stores and vending machines in more than 200 countries around the world.

Turn in your highest-quality paper
Get a qualified writer to help you with
“ The Effect of Coca-Cola Advertising ”
Get high-quality paper
NEW! AI matching with writer

The health implications are becoming greater as a higher amount of people consume this product.

The purpose of this report is to analyse and evaluate the impact of Coca-Cola advertising on the health of the community. This report will identify and critically analyse the nutritional content of the Coca-Cola product in order to make recommendations to the Minister of Health to reduce potential health consequences for the targeted audience.

The nutritional value of this chosen drink is not very high.

This report addressed the popular advertisement by the Coca-Cola Company, who promoted their original coca cola drink to young adults and teenagers; encouraging them to drink their beverage in the summer. The nutritional value of this drink is not very high. With a total of 180KJ per 100ml, coke is exceedingly high in kilojoules. To simply show comparisons, the recommended daily KJ intake for an average teenager is approximately 8200 (K. Baker, 2010). Despite the fact that this drink is fairly high in KJ, not surprisingly, it does not provide a long energy period for a drinker of any age.

To put into context, an average 340ml can of coca cola contains 145 calories and over 45g of sugar. Per 100ml, the drink contains 10.6g of both Sugars and Carbohydrates, and 10mg of sodium (Food Watchers, 2010). This nutritional analysis proves that viewers of this captivating advertisement are manipulated to believe that the product is a healthy, nutritious and sustainable choice to drink in hot weathers, such as the summer season.

Each year, the Coca-Cola Company devote a lot of money to advertising their product. Many strategies are used in order to promote their product effectively and stimulate sale figures. The Coca-Cola Australian Summer Commercial which aired in 2011 was targeted mainly at teenagers and young adults. The Coca-Cola Company intentionally air their commercials during, what is known as Prime Time Television (7pm – 10pm). The commercial gives teenagers a sense that if they consume the product, they will not only quench their thirst, but feel the way the people in the commercial are depicted to feel.

The product analysed in this report has unlimited negative health implications. The description states how consuming Coca-Cola has hazardous consequences. Most nutritionists advise that Coca-Cola can be harmful if consumed excessively, particularly in young children. This is because their soft drink consumption must compete with, rather than complement a balanced diet. What is more, it is believed that the relationship between soft drink consumption and body weight is so high that researches conclude for each additional serving consumed, the risk of obesity is increased by 1.6 times. Sugared drinks alone, has seen the obesity rate rise since 1995.

In addition, it is known that Coca-Cola contains a high amount of Phosphoric acids and virtually no calcium. This can lead to bone dissolving and weak bones, which can lead to easy bone fractures later in life, particularly in elderly people. This drink in particular is known to be caffeinated, which can lead to physical dependence and the need to consume more. Lastly, it is not just the obesity effects of this drink that have a negative impact on one’s health. Coca-Cola is a very acidic, carbonated, sugary drink. Over time the sugars and acids in the drink can begin to break down the enamel in teeth, leading to tooth decay. These are just a few of the health consequences of drinking the Coca-Cola product.

After analysing the nutritional content and ways by which the company market their product, several recommendations can be made to limit the health impact. The Coca-Cola company strategically air their product commercials multiple during prime time television. A possible notion which the Coca-Cola Company could consider would be to reduce the number of times they advertise the product. Minimising the amount of times the commercial is aired, and the time slots it falls in could reduce the amount of consumption by their targeted audience.

Another suggestion that could be made is to this organization could be to confine their timings, and make them avoid the prime times for when young adults are watching television. This could ultimately affect the obesity levels in Australia, as not a lot of people would not get addicted to this drink due to the fact that the ads would be restricted to only a few times a day, and by not airing them when the majority of the targeted audience is viewing television.

In conclusion, this report determined the risks of consuming coca cola, and evaluated the effectiveness of the strategies that companies such as Coca-Cola use, in order to sell their product to the targeted audience/s. The report presented an explanation of the nutritional analysis of coke; showing how it is extremely high in Sugars and Carbohydrates. It also showed that the targeted audiences were teenagers and young adults. This was evident by the age, appearance, and behaviour of the actors in the advertisement. This also showed the techniques and marketing strategies used by this massive corporation, so as to attract customers and get them addicted to their product.

Another aspect covered by this report was the potential negative health consequences of drinking an excessive amount of this product on a daily basis. These include obesity, bone weakening and tooth decay, to name just a few. The last topic covered by this overall analysis was making recommendations to the government, so as to in assist in reducing the negative health impacts listed above. The Coca-Cola Company should be restricted to airing their advertisements to a limited amount of times per day, as well as make the major organization avoid prime time airing. The recommendation made above would definitely play a major role in reducing the amount of negative health implications.

The Effect of Coca-Cola Advertising. (2016, Jun 08). Retrieved from https://studymoose.com/the-effect-of-coca-cola-advertising-essay 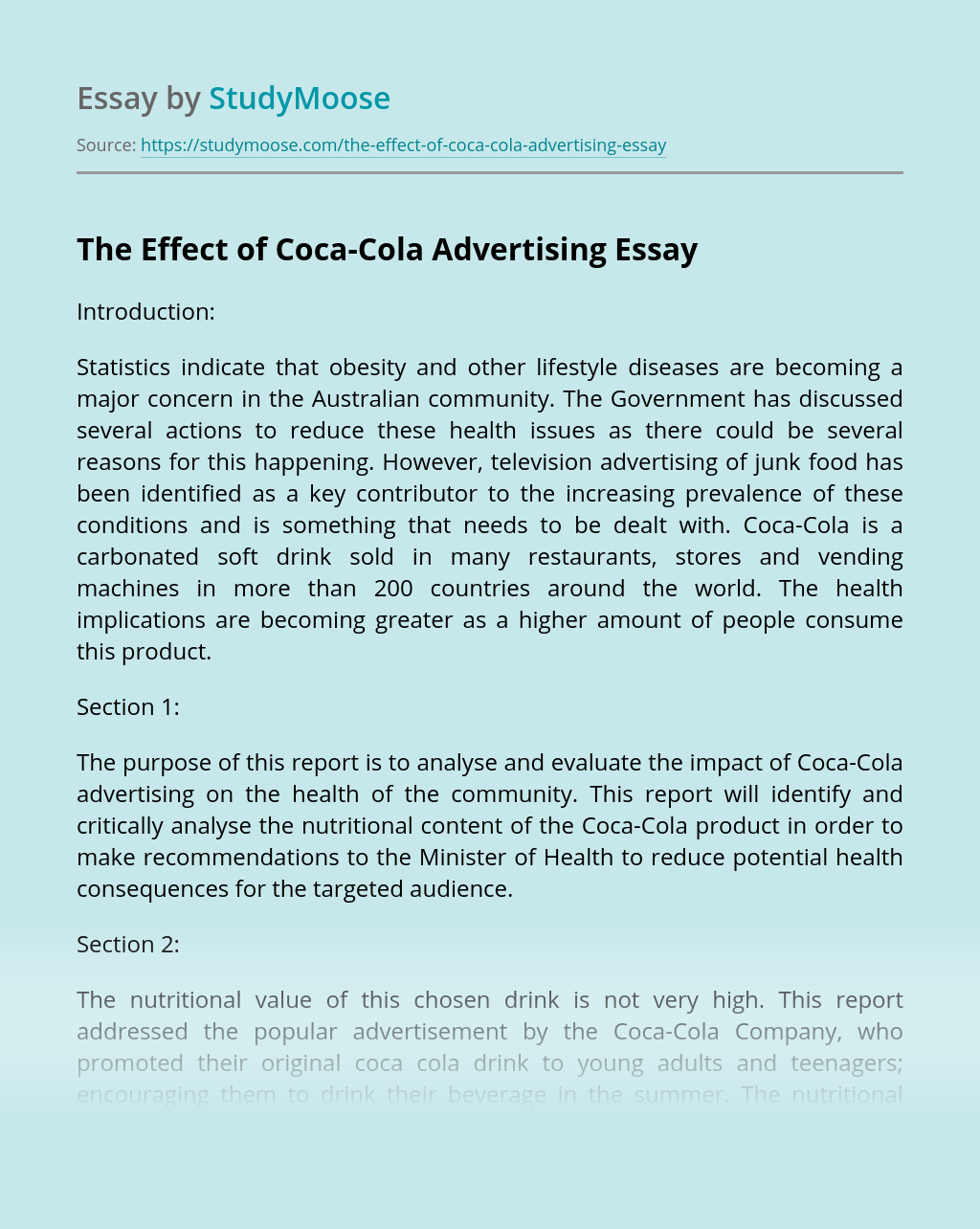 Turn in your highest-quality paper
Get a qualified writer to help you with
“ The Effect of Coca-Cola Advertising ”
Get high-quality paper
Helping students since 2015
Stay Safe, Stay Original