The Differences between Cambodian and American Culture

Around the world, there are many countries, and each country has their own tradition, civilization, culture so on and so forth. When I think of Cambodia and UAS, they are not exactly the same. Even though USA has influenced some conditions of culture to Cambodia, these two countries differ in family structures, religion, and school perceptions reflect the differences between Cambodian and American culture. The majority of Cambodia, family is the foundation of Khmer social structure.

Don't use plagiarized sources.
Get Your Custom Essay on The Differences between Cambodian and American Culture Just from $13,9/Page

The nuclear family has strong ties to extended family including cousins, aunts, uncles, and grandparents. Moreover, adult children are expected to live at home until marriage. Children are brought up as an integral part of the family unit and are expected to contribute to the overall welfare of the entire family. In contrast to Cambodian culture, American, the family unit is very divers, but generally it tends to be small, and other relatives may live in different parts of the country.

Another point is that adult children are encouraged to leave the nuclear family and become independence before marriage. Unlike Cambodia, in USA, children are not expected to contribute the welfare of the whole family. Cambodia and UAS also differ in religion. As we know, Buddhism is the majority religion in Cambodia. As a result, in 1989, the government declared that Buddhism was the main religion. The belief in Buddhist principles and teaching often dominate daily life.

Plus, upon the death of close relative, family members, including children, they may wear white to express their mourning. In addition, some children may wear a black scarf on their heads when they express their mourning for a mother or father. In contrast to Cambodia, American, Protestantism is the majority religion. Religion does not interfere with teaching in the public school setting. In addition, death of the close relative or family members is generally limited a week for mourning, especially special clothing to mark mourning is not worn outside the traditional service.

The last interesting point of my essay is focusing on the school perceptions. In Cambodia, students have not tendency to seek help from their teacher when they do not understand something in the classroom because they have the culture or habit of being shy. Moreover, Cambodian parents regard teachers and administrations as authority figures and will defer to them when there are dilemmas situation. In contrast to our country about the school perceptions, in school of USA, children will ask for help from teacher when they need it.

On the other hand, in USA, parents are expected to go to school for a variety of reasons such as volunteer activities at school and school committee meeting. Indeed, depending on my realizing, because of cultural differences, between Cambodian and American culture we cannot say which one is good or bad and right or wrong. As we know, no two countries have everything 100 percent the same; especially culture always has some kinds of differences. Therefore, I’m very happy to know the diverse points of culture, and I feel very proud to be a part of the world.

The Differences between Cambodian and American Culture. (2016, Jul 22). Retrieved from https://studymoose.com/the-differences-between-cambodian-and-american-culture-essay 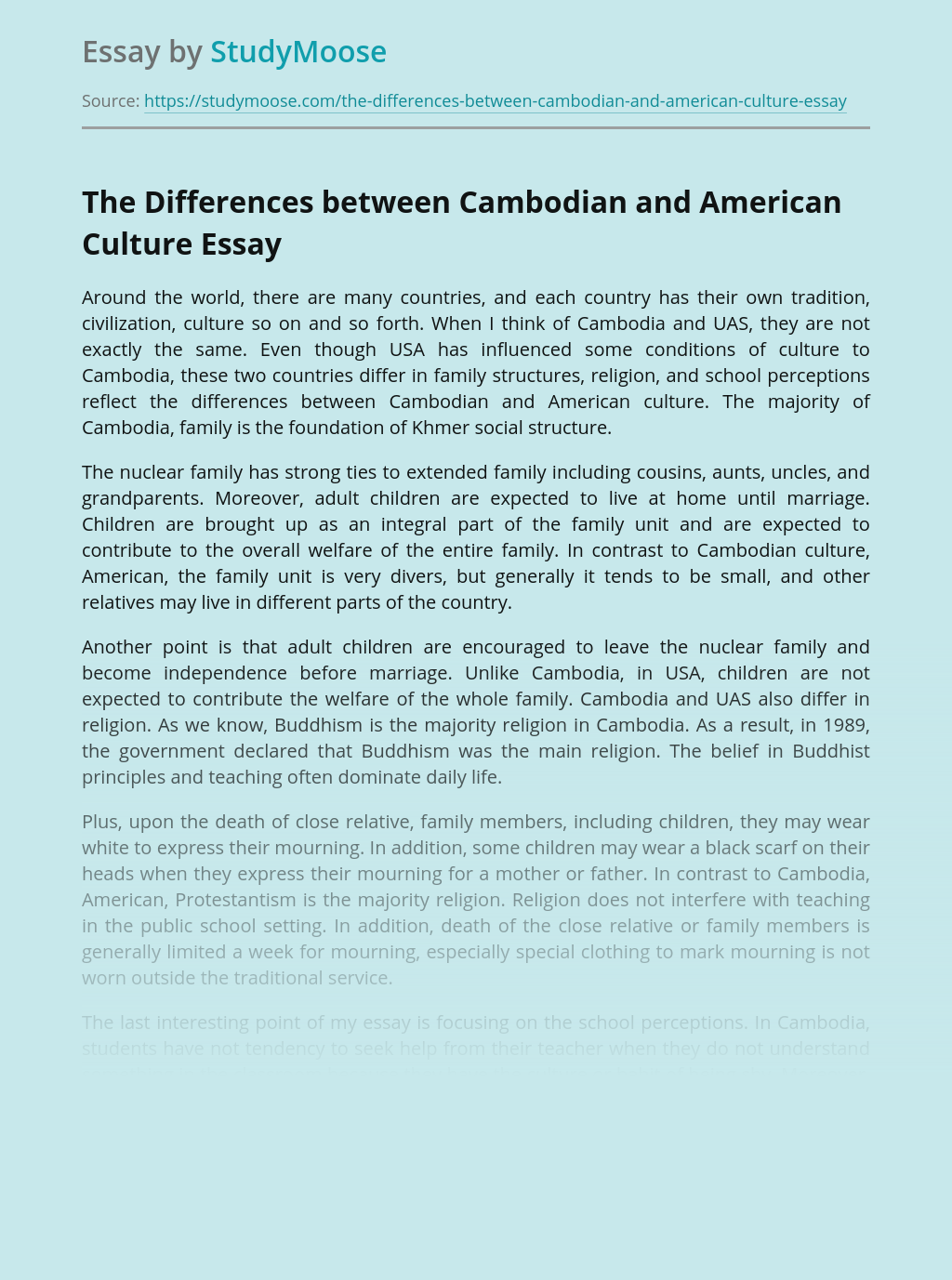