The Death Penalty - Legal Punishment for Hundreds of Years

In favor of Capital Punishment argue that execution is the only just punishment for those who have killed others or committed violent crimes. Those that are against Capital Punishment argue that the system is inconsistent and unfair. Supporters against abolishing the Death Penalty have protested it for its entire existence, but their numbers have increased over time. Many U.S. states do not have the Death Penalty anymore and the United States is one of the few countries that practice it at all.

Don't use plagiarized sources. Get your custom essay on
“ The Death Penalty – Legal Punishment for Hundreds of Years ”
Get custom paper
NEW! smart matching with writer

Increasing support to get rid of Capital Punishment makes this debate a hot topic of argument today.

The flawed areas can be split into the major categories of inconsistency, cases that have gone wrong, and what to do with the prisoners instead of placing them on death row.

Both sides argue about what is considered “fair”. The side in favor of the Death Penalty argues that Capital Punishment is the only fair punishment for the worst of the worst criminals. Acker states that the Death Penalty is “justification for punishment, is simply premised on giving an offender his or her just deserts”. This argument suggests that those that are handed the Death Penalty do not deserve the right to live and that they gave it up when they took the lives of others. One of the people that Hitzig interviewd in” Death in the Heart of Texas: Reflections from America’s Death Penalty Capital”, looked at the concept of “fairness” in a different way. She questioned “The crimes are in the past; does that mean the criminal doesn’t deserve any future at all?” This interviewee brings up the point that one evil crime does not determine an evil person. This point also leads into the question of “What gives us the right to decide who should die and who should live?”. It is an enormous responsibility to determine whether the life of another should be taken, even if that person supposedly “deserves it”.

Besides both sides sharing the importance of “fairness” as one of their core values, they also both care about progressing the legal system to one that is the most beneficial and efficient. Both the side in favor of the Death Penalty and the side against the Death Penalty can agree that inconsistency exists within the current system. Scott Dornbush, another one of Hitzig’s interviewees, gave his input and explained that “some people deserve to die, but the state of Texas lacks the power to discern and the uniform metric of justice to approxi­mate who those people are”. Basically he is saying that although some criminals may deserve the death penalty, our legal system is not good at and consistent in deciding who receives it and who does not, and therefore Capital Punishment should be abolished. New York University law professor Robert Blecker, a huge supporter of the Death Penalty was another person that Hitzig spoke to. Even though Blecker was in favor of Capital Punishment he still recognized that the court has made decisions to put people to death that have not necessarily made sense. For example, criminals are often executed because they are a threat to society and may kill again if they are released, but Becker questioned “What is the evidence that Trottie would kill again within thewalls of the prison?” Both the side in favor of the Death Penalty and the side against the Death Penalty acknowledge that there is always a chance that mistakes and unfortunate events can occur. Two examples would be convicting people who are wrongfully accused and then executing them and complications resulting from lethal injection. Hitzig cited that at the Huntsville Unit there had already been “three botched executions that occurred earlier this year”.

The Death Penalty - Legal Punishment for Hundreds of Years. (2020, Sep 16). Retrieved from https://studymoose.com/the-death-penalty-legal-punishment-for-hundreds-of-years-essay 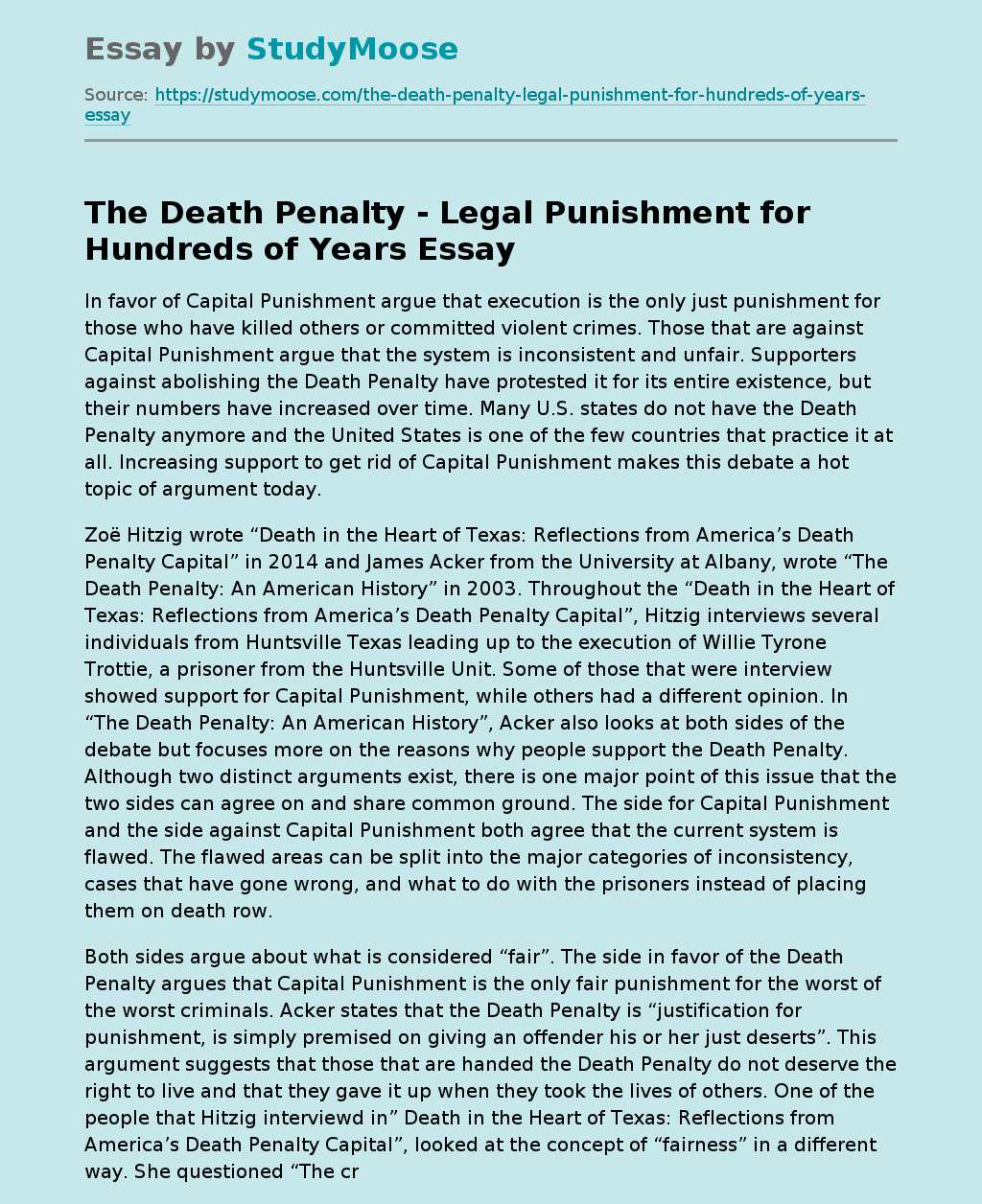