The Custody of the Pumpkin Essay

The Custody of the Pumpkin is a humorous piece written by P.G. Wodehouse that mocks the aristocrats of England in that time. In the story, the main character is Lord Emsworth, who represents the upper class and their eccentric nature. The humorous behavior of Lord Emsworth makes him the most memorable character of the story.

Emsworth is depicted as a “fluffy-minded” man who takes great interest in trivial toys and paraphrenelia. This is shown in the very beginning of the story where Lord Emsworth is looking through a new telescope and says, “I’ve been swindled.

Don't use plagiarized sources. Get your custom essay on
“ The Custody of the Pumpkin Essay ”
Get custom paper
NEW! smart matching with writer

This dashed thing won’t work.” His faithful butler, Beach, responds, “Perhaps if I were to remove the cap from the extremity of the instrument, my lord, more satisfactory results might be obtained.” This dialogue shows us how Lord Emsworth bought the telescope, without even realizing its full purpose and fuction. This humorously portrays him as a fanatic, interested in the frivolities that have no real purpose to him.

His child-like obsession is underlined when he says, “Beach, I see a cow!” This shows his unjustified passion for such strange toys.

Compared to his respectable lineage, his achievements are depicted as very meaningless. The writer subtly puts this across when Lord Emsworth is anxious about winning a pumpkin contest, which he had missed out on till that day. Wodehouse writes that he had won awards before ones that had held very little value- “for roses, yes. For tulips, true. For spring onions, granted. But not for pumpkins; Lord Emsworth felt it deeply.

” This line makes his achievements seem miniscule compared to his predeccesors who were warriors, statesmen and tailors. This makes him stands out to the reader as a peculiar sort of ‘overachiever’ in his field of interest, which is trivial in itself.

Lord Emsworth is also humorously shown to be obsessive about his precious pumpkin- “Blandings Hope”. He also believes that his former head gardner Angus McAllister had an emotional connect with the pumpkin. He says, “Perhaps the pumpkin was pining for him too.” This makes him humorous to the reader, by depicting him as a very concerned ‘parent’ to the pumpkin.

This concern is later intensified when his son, Frederick, comes to visit him in London from his estate. Emsworth jumps to silly conclusions about the pumpkins- “What’s wrong? Have the cats got at it?!” The son seems confused and asks, “Cats? Why? What? Where? Which cats?” Then Emsowrth clarifies, “Frederick, speak! What happened to the pumpkin?!” This portrays Emsowrth humorously as an obsessed and anxious man. Even his son “ridiculed” him.

Throughout the story, Emsworth’s character is constantly fretting over his beloved pumpkin, not even caring as much for his own son. These idiosyncracies of Lord Emsworth are what make him most memorable and enjoyable to read about. His eccentric, anxious and childish nature paints a character in the reader’s mind that is humorous and difficult to forget.

The Custody of the Pumpkin Essay. (2016, May 13). Retrieved from https://studymoose.com/the-custody-of-the-pumpkin-essay 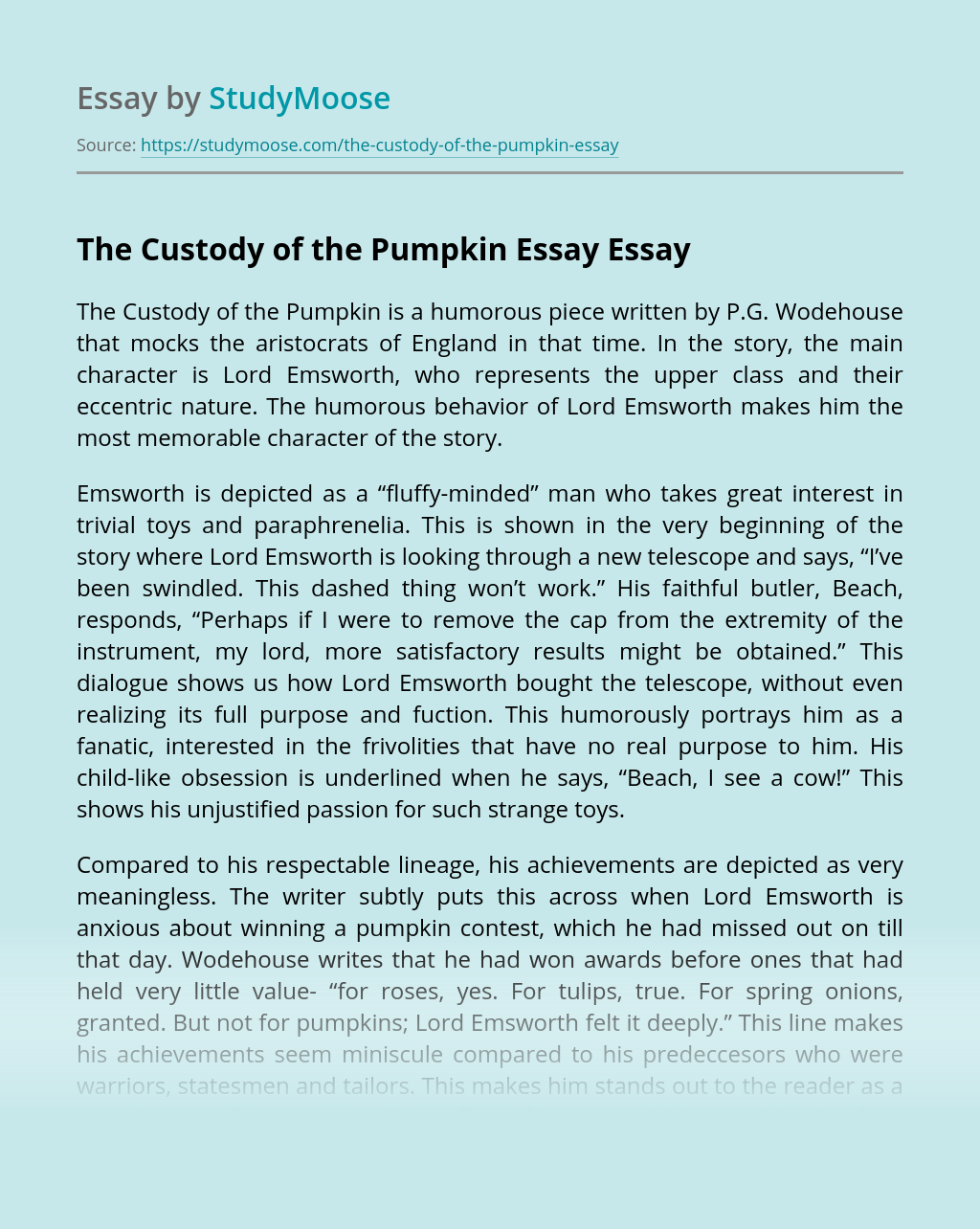