The Culture of Mass Incarceration

Mass incarceration in the United States is so high it operates through structures of gender and racial discrimination that unfairly target communities of color. The incarceration rate in the U.S is five to ten times other western democracies, with less than five percent of the world’s population, but our country’s prisoners account for one-quarter of the global prison population. The United States incarcerates more people in absolute numbers per capita than any other nation in the world, including China and Russia.

Don't use plagiarized sources. Get your custom essay on
“ The Culture of Mass Incarceration ”
Get custom paper
NEW! smart matching with writer

Over the past 30 years, the number of people held in jails and prison in the U.S per capita has more than quadrupled, making the total number of people incarcerated now surpassing 2.3 million. Since 1970, the population in U.S prison has risen about 700%, a rate that far outpaces that of the general United States population and crime rates. Overcrowding in the prison system started with the so-called war on drugs along with its harsh laws that put a large number of nonviolent drug offenders behind bars.

These laws include mandatory minimum sentencing, that forces judges to issue severe sentences regardless of individual factors and the three-strike laws. During this period the federal government and every state have seen a massive increase in inmate populations. Mass incarceration is the modern form of racial segregation; along with these harsh policies increasing the number of people imprisoned and the lengths of their imprisonment as well as limited opportunities for release is causing the population of state and federal prison population to overcrowd.

The growth of the U.S jail and prison since the 1970s is the consequence of more than a decade of being “tough on crime” policies. Since then the state and federal legislators have passed laws creating severe sentencing and parole schemes designed to keep increasing the number of people in prisons.

In the article “Drug War nightmare” by Michelle Alexander she argues that the war on drugs was not an actual war on drugs but a war on communities of color. The 13th amendment is also a loophole that helps with overcrowding of the prison population. Currently, one in 99 adults is living behind bars in the United States, and one in 31 adults is under some form of correctional control, such as prison, jail, parole, or probation. Existing facilities have been overcrowded far beyond capacity, with prisoners sleeping in gyms and hallways or triple and quadruple bunked in cells.

Solutions on how to end overcrowding in corrections

The government can eliminate incarceration as a penalty for certain cases of low-level crimes. We can find other means of punishment for low-level crimes such as assaults, theft, traffic violations, etc. Most of these crimes do not jeopardize the victim or defendant life so they are not a threat to society. Between 2003 and 2008 they imprisoned thousands of young people, many of whom had committed their first and often minor offenses (Gale Encyclopedia of U.S History). Committing a crime is not the right thing to do, however, giving harsh sentences to someone who committed a petty crime as low as stealing a jacket from a clothing store does not require such a lengthy sentence it is just a piece of cloth. According to the U.S Department of Justice, approximately 30-40% of all current prison admissions involve crimes that have no direct or obvious victim other than the perpetrator.

Reducing mandatory minimum sentences for those currently in the prison system and those going in can lessen the overcrowding rate. Whoever spending a life sentence for nonviolent offenses the government can lessen their sentence to six months to a year or make it mandatory for them to do community service. The increase in the prison population is due to the federal Anti-Drug Abuse act of 1986, which set mandatory minimum sentences for drug crimes (Gayle Encyclopedia). With these act judges could not consider the circumstances around a person’s case, they had to just give the mandatory minimum sentence that was set by the federal government. Sharanda has spent the last sixteen years in prison because she was sentenced to life without parole; her only crime was transporting cocaine. She had never been arrested but the judge was required to give her a mandatory sentence to send her away for life. It is unfair to not allow judges to consider the circumstances around people who commit crime whether it is for the first time or not, we are all humans we were born to make mistakes.

Removing barriers that make it harder for individuals with criminal records to turn their lives around is a possibility to end mass incarceration causing the prison population to overcrowd. Most of the time these convicts get released from prison they are shunned by society and lost certain rights they had before they went into the prison system. Once you’re labeled a felon, the old forms of discrimination in employment, housing, denial of the right to vote, denial of educational opportunity, denial of food stamps and other public benefits (Michelle Alexander). When filling out any forms to get employed or assistance from the government they are required to answer the question which asks if they have ever been convicted of a crime or felony. Majority of the time these applications do not get accepted because they are placed in a box that labels them a felon. They not only face discrimination they also lose their rights to vote, the right their ancestors fought for so that their voice can be heard. This only gives them a reason to take part in illegal activities that push them right back into the prison system.

Amending the three strike law that put people with repeated offenses behind bars for a long period will lessen the prison population. The three-strike law makes it possible for a person to go to prison once they commit a third offense. Three strikes law sanctioned offenders with harsh punishment to keep them from committing the same offense again to keep society safe (Encyclopedia of Criminology and Criminal Justice). With this law, it is a mandatory requirement to sentence a person harshly to which they can get sentence twenty-five to life imprisonment. This law needs to be terminated because it is not helping society it is just causing taxpayers a lot of money and easily put people away for life.

The Culture of Mass Incarceration. (2020, Nov 03). Retrieved from https://studymoose.com/the-culture-of-mass-incarceration-essay 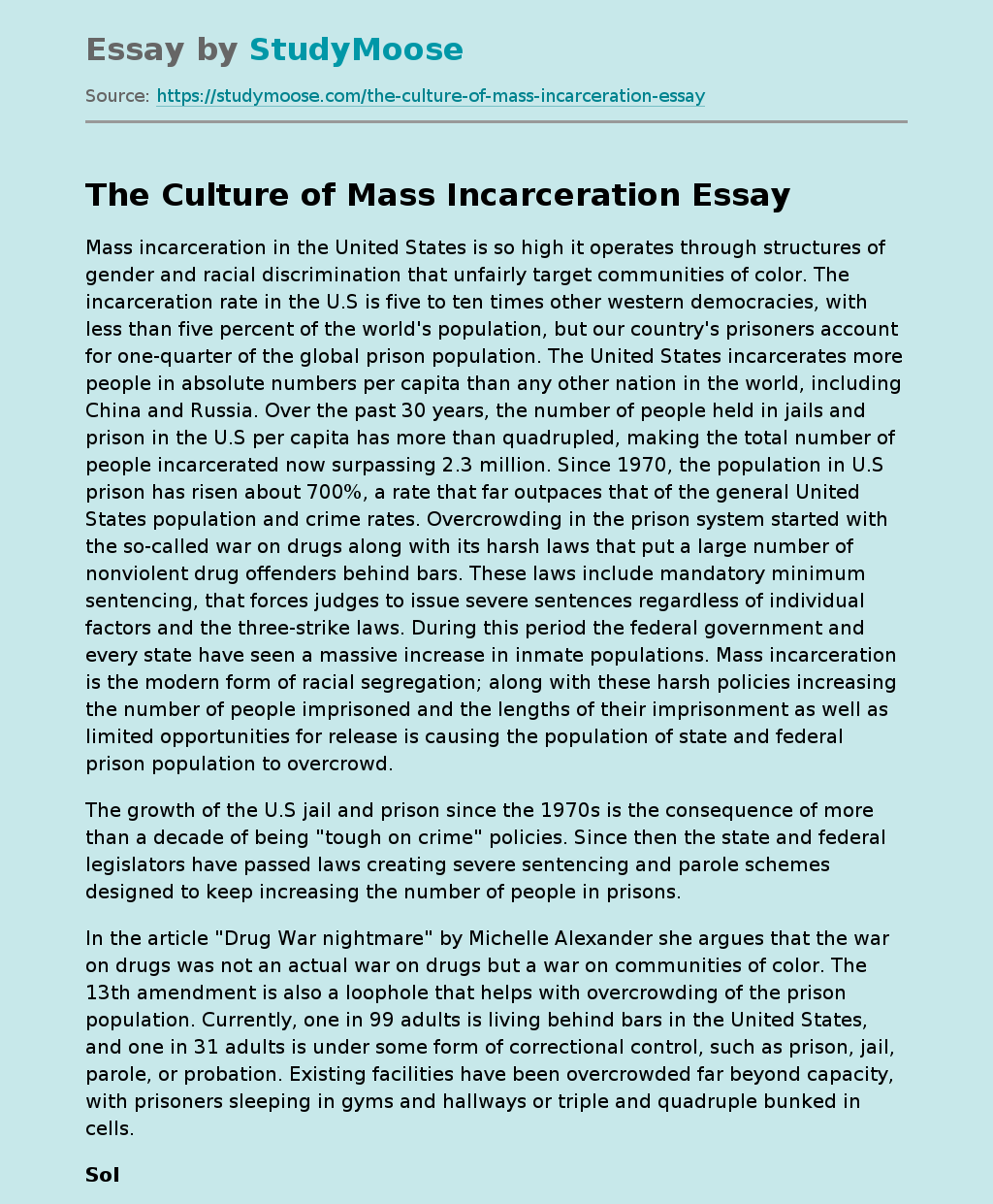