To remain a commercial viability, programmes should have an acute populist antenna. And the public’s attention must be attracted by some quirky characteristic. As Mike Wayne pointed out: ‘Under public service broadcasting, examples of the quiz/game show genre tend to foreground such values as camaraderie, for example, It’s A Knockout and The Generation Game, or specialist knowledge, e.g. Mastermind or University Challenge, or physical/problem-solving skills such as The Crystal Maze…but the more exchange values permeate television, the more we can expect consumerism, consumer goods, individualism and hard cash to be at the centre of the game show.

Don't use plagiarized sources. Get your custom essay on
“ The Crystal Maze ”
Get custom paper
NEW! smart matching with writer

Weakest Link is an ‘exploitative’ show, designed to humiliate contestants, not to support or celebrate them as is often the case in standard shows (Culpeper, 2005:35). Unlike Who Wants To Be A Millionaire and Mastermind, in which they attach importance to showing participants’ individual heroism, it emphasises the negative element-the hideous side of human nature resulting from selfish desire.

In addition, the dramatic aesthetic of Weakest Link works to distance the programme from the traditional (working) class connotations of the genre and many quiz/game shows have aimed since to divest themselves of the association of ‘naff old men in sparkly jackets’ (Robins, 2000b:8). Weakest Link exploits a disapproval voting system similar to reality TV shows, and play up the realistic confrontation between contestants. Without a doubt this challenges cultural norms and assumptions represented in previous generations of quiz/game shows.

What is also worth mentioning is that the aesthetic appearance of Weakest Link is in many ways ‘cinematic:’ the swooping camerawork, glitzy set, fast-rhythm sound and dramatic dry-ice lighting system, which can generate the desired tension, are integral to the innovation of the show and its dramatic rendering of the game.

The set-up places the host, Anne Robinson, at the center of a lighted stage (reminiscent of Who Wants To Be A Millionaire), with the nine contestants in a semi-circle around her. She has a swiveling podium so she can easily turn from player to player as she asks each question.

Weakest Link primarily trades in what can be conceived as general knowledge instead of academic knowledge, appealing to its ‘classless’ claim (it attracts all ages and demographic groups). Moreover, on Weakest Link, each round has the constraint of time. Contestants have no time to mull over questions and they have to pull the answers out of their heads in rapid response to questions without any help. In this show, time is literally money. As for Weakest Link, questions themselves are no longer the main part of the programme but just a ‘contextual aid’. The knowledge encapsulated in this programme is de-intellectualised and its educational function is gradually fading out, which signifies a broader cultural shift. Obviously, Weakest Link removes the genre from certain cultural assumptions and instead creates associations with less sensitive concepts of play and leisure.

The style of the host, Anne Robinson (who is described as a black-robed spawn of Satan!), is disputed and does provoke some criticism in the press and amongst the public. Subverting the traditional image of quiz/game show’s host-kind, genial, polite and gentle, Anne Robinson is acerbic, cruel, vicious and offensive, treating contestants with indecorous sarcasm. After each voting round, Anne Robinson has the opportunity to ‘chat’ with the contestants. This is one of the key factors in the show. The term ‘chat’ is used by Tolson to refer to: ‘A clear shift of register within the program format where it occurs, such that the primary business of the format is temporarily delayed or suspended. Thus in the context of the game show, chat between participants delays the actual playing of the game (a prime example would be Blankety Blank).’ (Tolson, 1991:179)

‘Chat’ reflecting on the proceedings has much more to offer, not least of all because it can involve a shift towards personal/private matters. According to Jonathan Culpeper’s research, on Weakest Link, ‘chat’ has the following structure:

Anne Robinson grills the contestants about their choices; belittles them if they answer badly or do not bank much money; insults the contestants about their appearance or jobs by implying that they are stupid, and delivers biting, sarcastic remarks to wither the contestants self-esteem (e.g., ‘Did somebody check their brains at the door?’ ‘Is there no end to your ignorance?’ ‘You are quite honestly the most stupid person I have ever met. Are you intelligent enough to be on the show?’ ‘Do you think you are on the right show today?’). She is wickedly funny and this factor moves Weakest Link at a more bearable pace than the lethargic, geriatric-aimed Who Wants To Be A Millionaire.

Her sardonic summary to the ‘team’, usually berating them for their lack of intelligence for not achieving the target, becomes a trademark of the show, and her mocking catchphrase, ‘You are the weakest link, goodbye!’, which punctures each elimination stage, has become so popular in the UK that even Prime Minister Tony Blair blurted it out to tell off opposing members of his party. Curious viewers keep coming back to hear what new inventive methods of verbal abuse Anne Robinson will use each episode.

To some extent, this show trades in the exploitation of human weakness for the sake of voyeuristic pleasure and creates ‘butts’ out of the contestants for the audience’s amusement. Admittedly, no quiz/game show host draws more attention away from the contestants than Anne Robinson whose callous treatment of contestants brings a new element to Weakest Link. Yet what is worth noting is that she is a singular anomaly and not indicative of a trend.

Because of its unique style, it seems to be difficult to judge the genre of Weakest Link: is it a game show or a quiz show on earth? Fiske pointed out: all shows that deal with competitions between individuals or groups, and that are based primarily on the display of factual knowledge will be considered to be quiz shows; shows dealing with human knowledge (knowledge of people or of individuals) or that are based primarily on gambling or on physical performances fall in the category of game shows.

However, in recent years, the terms ‘quiz show’ and ‘game show’ have been used interchangeably and perceived usually as homologous. (Fiske, 1987: 108) Due to the blurry differentiation between these two genres, it seems difficult to distinguish the quiz show genre from that of the game show; most quiz shows incorporate some elements of the game show in an effort to capture a lager audience share (Goedkoop, 1985: 297).

The contestants have the alibi of seeking monetary reward, although most of them ‘leave with nothing’. However, there is no denying that the overt motivation of participants is financial reward. Weakest Link could not get rid of the previous image of quiz/game shows involving a ‘vulgar’ display of material gain[3]. It is undeniable that like other quiz/game shows, Weakest Link is in tune with commercialism, epitomized by the cash prizes. They have been regarded as a ‘celebration of consumption, glorifying consumer goods’ (Goodwin & Whannel, 1990: 106).

It is widely recognized by the press that ‘most television “phenomena” rely on an illusion hyped by the medium itself, a constructed and marketed image’ (Stour, 2001). Weakest Link is obviously congruous with this description; it attempts to capture and attract the viewers by playing to aspirations of ‘cleverness’ and a more recent crazy preference for irony and ‘impoliteness’. Daniel Stour on The Weakest Link notes that: the show advances a form of socially sanctioned sado-masochism borne out of the displaced desires of an economized, virtualized society…Just as sexual gratification…becomes removed from the sexual act, the role of game show contestant or viewer is removed from the object of winning the game (Stour, 2001).

Anne Robinson’s put-downs work by ‘devaluing’ the personal qualities or abilities of the target-they attack Quality Face (Culpeper, 2005: 50). More succinctly, according to the above, the ingredients for Weakest Link’s domestic and global success can be outlined with three points: ridicule, humiliation and a large sum of money. Viewed objectively, Weakest Link, a hybrid of different forms with popular interactive elements, is a new successful format evolving against the backdrop of the standard quiz or game show. 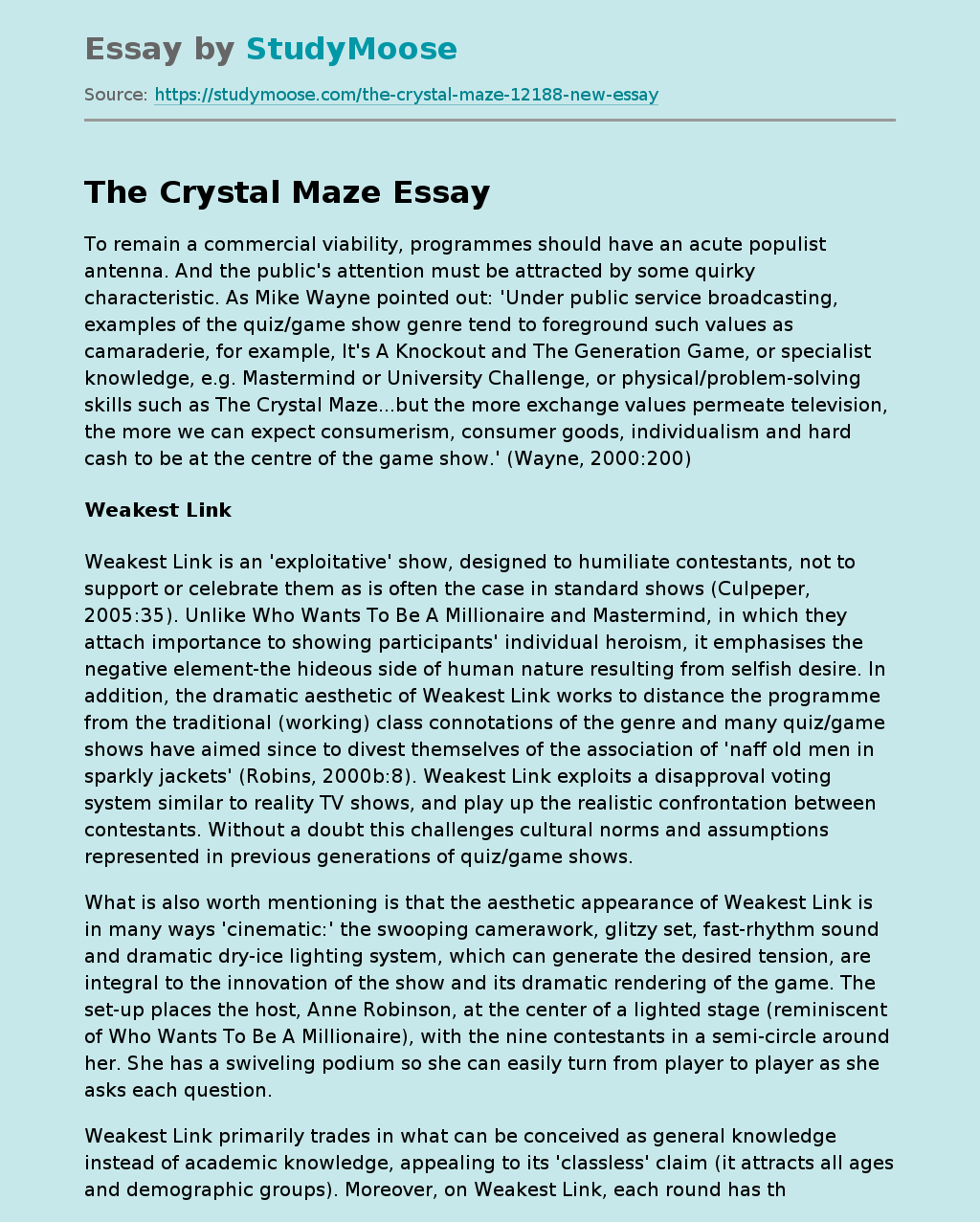