The Crucible is the famous play created by the American

The Crucible is the famous play created by the American playwright Arthur Miller in 1953. It is the classic American drama, which was repeatedly staged in both the United States and abroad. In 1996, Miller participated in the production of a film adaptation. The movie of the same title, which stars Winona Ryder and Daniel Day-Lewis, received several nominations but was not popular among the critics and the audience. Although The Crucible movie and play tell the same story, they differ slightly in terms of characters’ portrayal, scenes, dialogues, etc.

Don't use plagiarized sources. Get your custom essay on
“ The Crucible is the famous play created by the American ”
Get custom paper
NEW! smart matching with writer

This essay aims to explore these similarities and differences in more detail.

Before proceeding to the comparison itself, one needs to provide the brief summary of the story. Both the play and the movie are set in 17th-century Salem, Massachusetts and focus on a group of women accused of witchcraft. The Puritan New England described in the play had strict rules regarding women’s conduct, and this extremely restrictive society was characterized by misogyny, intolerance, and religious persecution.

Any woman daring to go against the established norms and express her identity and sexuality was severely punished (Hammer, 2011). The story shows how strict and discriminatory laws lead to injustice and tragedy and strongly criticizes suppression of individuality.

The movie and the play differ in many aspects. To begin with, some scenes shown in the movie are only referred to in the text. For example, the movie includes an episode where the girls are dancing and chatting in the forest while in the play, characters only mention it.

As far as I am concerned, Miller added this scene as a foreshadowing, which also helped the viewers to understand the main idea more clearly. Moreover, the movie includes many outdoor scenes that occur indoor in the play. Possibly, it was a deliberate approach to make the movie more visually enjoyable.

Furthermore, there are some differences regarding the characters of Abigail and John. The movie version of the story includes a scene where they discuss their relationships and kiss, whereas the play does not mention kissing. I think this change was made to make readers sympathize the characters more and add dramatic effect. There is also one additional scene where Abigail comes to see John in the jail before his execution, which, in my opinion, also created additional tension. Some scenes with John in the movie make him a tragic hero, whereas the play leaves it to readers to decide whether this character is good or bad. Finally, the author has changed Abigail’s age from 13 in the play to 17 in the movie. This change was likely affected by the differences in social and cultural norms. While in the 17th-century America, a 13-year-old girl was perceived as an adult, the contemporary society sees her as a teenager. The change, therefore, was aimed at making the story more comprehensible for contemporary viewers.

The overall mood of the movie also differs slightly from that of the play. For instance, the character of Betty is shown more violent in the movie, which allowed producers to create the tense and threatening atmosphere. Similarly, the play does not mention the fact that girls come after Marry, whereas the movie explicitly shows their hostility. Moreover, Putnam looks almost psychotic in the movie in contrast to the play where his vindictive and cruel nature is not so obvious. All these slight differences add drama to the story and make it look even more appalling and bone-chilling. To summarize, The Crucible movie and play have some differences in scenes, characters, and dialogues, which make the story more dramatic and allow viewers to sympathize the protagonists. Changes made by Miller in the film adaptation do not alter the main idea of the story but only highlight it and intensify the impression.

The Crucible is the famous play created by the American. (2019, Dec 10). Retrieved from http://studymoose.com/the-crucible-is-the-famous-play-created-by-the-american-example-essay 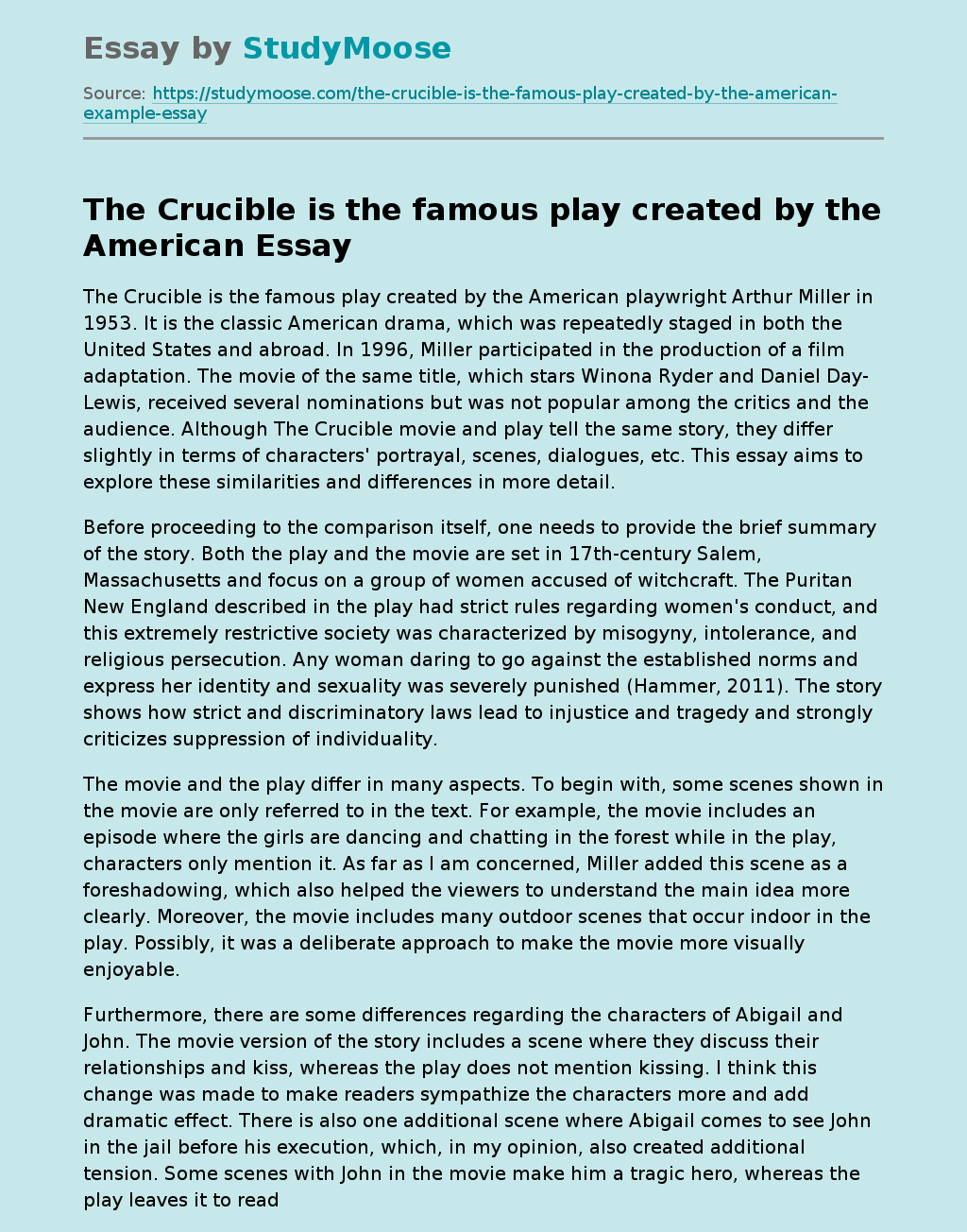