As we progress through the session, brought in front of the audience is Abigail Williams, previous of Proctor’s family and John Proctor a farmer in his ‘middle thirties’. The author describes Proctor as a ‘man-powerful of body, even tempered, and not easily led’ and that ‘In Proctor’s presence a fool felt his foolishness instantly’, from this we recognize why he did not seem very convinced that ‘the Devil’ had any hand in this act of ‘witchcraft’.

In this area of act three the audience witness the questioning of Mary Warren, described by Miller as a ‘subservient, naive, lonely girl’, she is subordinate, easily manipulated.

Don't use plagiarized sources. Get your custom essay on
“ The Crucible Essay ”
Get custom paper
NEW! smart matching with writer

In a string of attempts to convince the Judge of her ‘innocence’, Abigail cries ‘Oh Heavenly Father, take away this shadow! ‘ and ‘without warning or hesitation’ Procter ‘leaps’ at Abigail ‘grabbing her by the hair and pulls her down to her feet’, ‘she screams in pain’ and the astonished Danforth yells ‘What are you about?’, Proctor immediately replies with a ‘roar’ ‘How do you call heaven? Whore! Whore! ‘

This particular scene creates tension mainly through Proctors actions and the dramatic irony that has been in place since act one when we found out that Abigail and Proctor have a history together which builds up the great suspense of if Proctor reveals his deep dark secret that could ultimately sentence himself to execution as it is considered a fatal sin to commit such acts especially being a married man.

It seems here that Proctor sacrifices his own life in order to save his wife, Elizabeth and also the lives of many other women in the process.

Ironically by unveiling his ‘sin’ from the past, he appears to have taken a route towards ‘goodness’ and ‘justice’. Abigail who is stunned instantly denies Proctor’s accusation ‘Mr. Danforth, he is lying! ‘ Proctor ‘trembles’ as if his life is ‘collapsing about him’ ‘I have known her, sir. I have known her’. Thus the secret leaks out and the audience reach a colossal peak of tension as they are immensely eager to know the consequence of Proctor’s confession.

As Abigail still remains to deny the claim, Proctor states that he has evidence of this, his wife who according to Proctor ‘knew a whore when she saw one’ and ‘in her life’, she has ‘never lied’. Elizabeth ‘Goody’ Procter is called into the courtroom and is told to not even look in her husband’s direction. Without delay she is asked questions regarding why Abigail was put out of employment. Elizabeth slowly but surely explains how Abigail dissatisfies her. According to Goody Proctor she felt that her husband was ‘turning from’ her to an extent that she came to think he ‘fancied’ Abigail.

At this stage, the audience build a sense that she is going to confess about what she knows regarding the past relationship between John Proctor and Abigail, in the process this develops the suspense. She is then asked ‘to your own knowledge, has John Proctor ever committed the crime of lechery! ‘ and as a result she finds herself in quite a predicament. The audience can tell that she is not perfectly sure on how to respond in this very situation as a lot is at stake and she feels the pressure. Goody Proctor makes several obvious attempts to glance at Mr.

Procter which shows us how lost she is as to whether she should tell the truth like she has all her life or does she break the trend this time so that she can save her husband, the only flaw with that is that she doesn’t know that John Proctor has in fact confessed to both the judges in court that he has had previous association with Abigail. This quick turn of events falls into the play as yet another case of dramatic irony. Elizabeth ‘faintly’ says ‘no, sir’ and Danforth calls for her to be sent away, as so Proctor cries out ‘Elizabeth, I have confessed it! ‘ and she is left staggered as she says ‘Oh, God!

‘ and the door closes behind her. This creates tension as it was expected for Elizabeth to tell the truth, but as she didn’t know of Proctor’s confession, she honestly thought that she was saving him from trouble. This is ironic as Proctor thought that Elizabeth was going to tell the truth as she always does, she does very much the opposite of what every assumed she would do. We see here that Proctors wellbeing is more important to her than moral goodness – in this case her reputable honesty. When Elizabeth leaves the court, pandemonium stirs inside the courtroom as Hale relentlessly pleads Proctors case to be true.

Once again, just as Abigail was about to be denounced, she finds a way to distract everyone. Abigail shrieks and points at the ceiling frantically, claiming to see a yellow bird, which according to Abigail was representation of Mary Warren. Abigail yells towards the ceiling as if she were having a genuine conversation with the ‘yellow bird’, ‘But God made my face; you cannot want to tear my face. Envy is a deadly sin, Mary. ‘ This tells us that she is referring to the bird near the ceiling to be Mary or a representation of her.

Meanwhile Proctor tries to justify that there is no bird and that it is just a mere act. Abigail and the girls carry on talking to the ‘bird’ as if it were Mary herself. We come to see that in this scene that Abigail is very much the ringleader of the mob of girls that deceive the judges as she is the one that starts the ‘yellow bird act’ and contributes to most of the dialog. Mary breaks down and begins to plead and cry that she is not doing anything for the girls to act this way and for Abigail to stop, but girls continue and start to reiterate everything she says.

It is noticeable that most of the tension produced in this scene is done by the build up of pressure on Marry Warren. As the audience know she is a mentally weak person and therefore they do not know what to expect as her response. Mary Warren now vastly becoming ‘confounded’ and ‘powerless’ feels that she is very much vulnerable and without hope. As Proctor tries to get her to plead her case further, Mary shouts ‘Don’t touch me – don’t touch me’, at this stage the girls halt at the door.

At this point the audience are as stunned as any of the characters as you would not expect Mary, a weak minded girl, to react in such way towards her employer who she fears, above all being in a sticky predicament such as this. Proctor being as astounded as he is, is awestruck when Mary points at Proctor and says ‘You’re the Devil’s man! ‘ This single statement practically puts all the tension built up by Mary Warren onto John Proctor hence putting him in a position where he has hardly any direction as to what to do.

Danforth is amazed, but asks Proctor if he is ready to ‘confess’ or ‘go to hell’. This just implies that he is undoubtedly ‘the Devil’s man’ because Danforth does not allow him to express himself as to if he is innocent of the accusations. The tension as to what Proctor will do yet develops another peak, however this is momentary as it reaches an even greater platform as the audience feel as though Proctor has reached the utmost worst scenario he could be involved in, until he says ‘God is dead!

‘ And thus he has practically buried himself as the comment appears to agree with all the allegations and so it seems that Proctor is very much a ‘dead man’. At this point the tension has been broken slightly but suspense has built up due to the audience wanting to know the consequences for Proctor’s comment. It would appear that the outburst of this harsh statement is developed by the brewing anger that has been built up towards the theocracy.

Throughout the play, Miller has provided a sense of irony as a key element in the foundation of the play, the witchcraft hoax, is considered as a form of dramatic irony as the judges are to stubborn to consider that they could be fooled as it could put them to shame, as the would be responsible for around ninety innocent deaths. In more simpler terms, as they ‘supposedly’ preach religion and God they instead contradict their own beliefs in order to keep themselves out of trouble and humiliation, very much like the girls who where dancing in the forest.

This scene can prove powerful even till this day as it shows how a system of government can be manipulated as Abigail did in court. People’s views and thoughts should be put into consideration when something as valuable and important as a life is at risk. And one should not judge a case by what they see on the outside but to attempt to take a bigger insight into all aspects of the trial and accusation made. We can see how irresponsible bias judgements can be mistakes and also follow onto the punishment of innocent citizens. 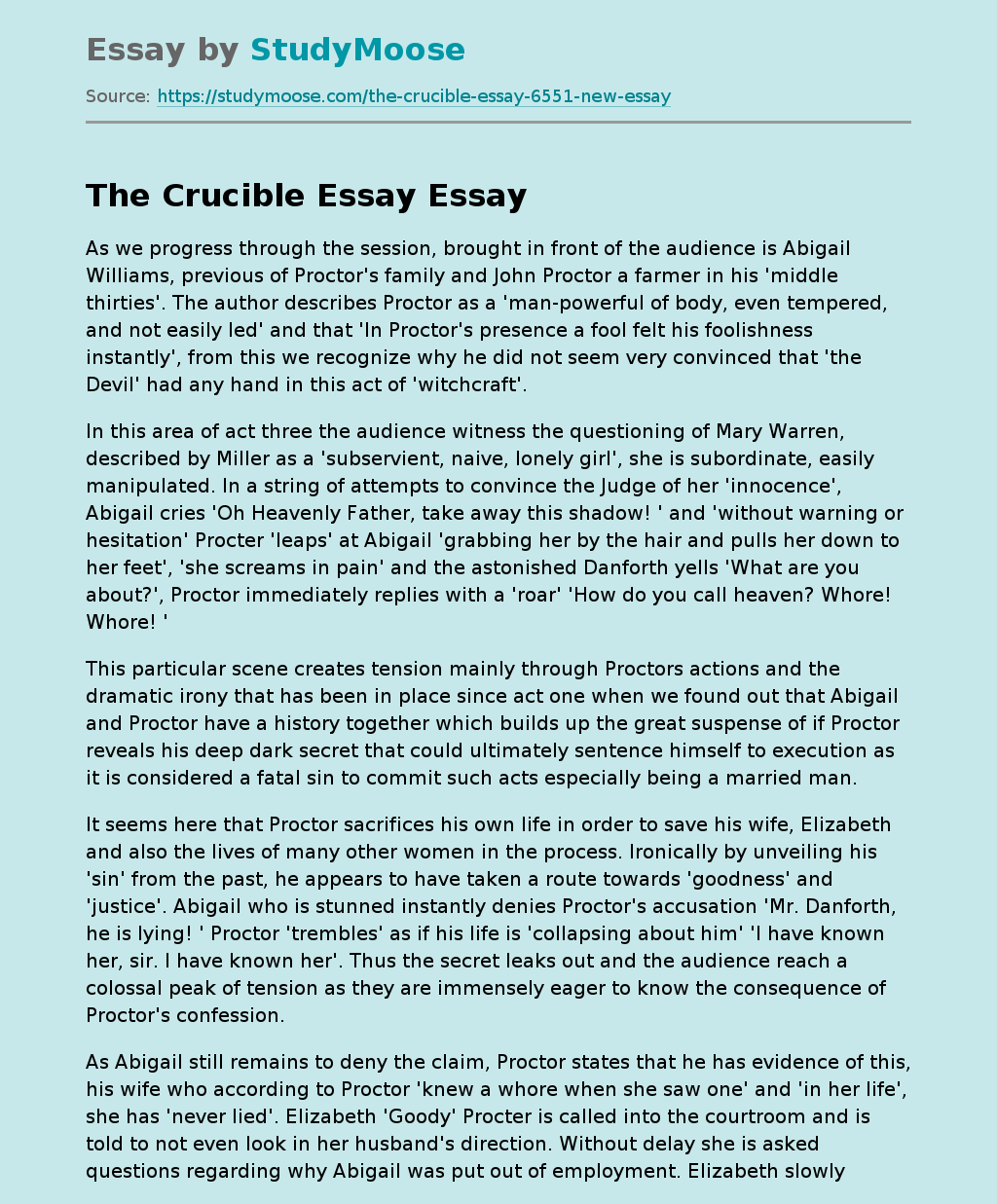