They walk the cold and misty streets and you can hear sound of dogs barking in the background, brass instruments begin to play you can feel the excitement building as each note is quickened. The whispers gradually disappear and the giggling slowly seeps in, the giggles begin to get louder as the music steadily speeds up with each note that is forced out. The tension builds as the girls run through the woods you wonder what’s happening, where are they going, you hear the soft snapping of twigs and sticks under the girls scurrying feet.

Don't use plagiarized sources. Get your custom essay on
“ Analytical Essay The Crucible Assignment ”
Get custom paper
NEW! smart matching with writer

Voices begin to overpower the music, girls speaking softly as if telling a secret, then a sudden silence. Nothing at all not the slightest murmur, a short outburst of laughter and then African music quiet at first slowly comes in. A chant begins to be whispered gradually becoming louder, the chant is African it sounds spooky and mysterious. An African woman called Tituba, played by Charlayne Woodard, performs the chant; the African chant is looked at as an evil doing.

. The girls are whispering things, you can feel the excitement from the girls as they start to shout sentences such as “tell her to make spells” and “get her John Proctor again”, this shows us that young Abigail has committed adultery before, a serious offence in the eyes of this puritan community. The girls begin to put things into a pot, they are brewing spells and conjuring spirits, the girls begin to act in a sexual way.

This is seen to be an inappropriate way for a woman to act and implies that when the girls are in the woods all their communities views and rules no longer matter to them.

When Abigail drinks the blood of the cockerel this shows us that Abigail is both mentally and physically more involved in the witchcraft than the other girls, she thrives on the evil. She takes it one step further by drinking the blood, this proves to us that she wants more witchcraft to take place, she needs more evil. All the girls including Tituba are horrified when Abigail drinks the blood. Then screams of terror as the girls are seen by the minister, they are terrified. The use of the minister in this scene catching the young girls brings religion back to the forefront.

The girls start to run shrieking and screaming with horror and cries of fear echo through the shivering woods. The girls are scared because anyone involved in witchcraft is punished severely and when I say severely I actually mean they were put to death. The next area that I am going to look at is lighting and colour, this also can play a big part in setting the scene and the mood of the film. In the first part of this film they use dark and dingy colours like blues, blacks, greys and purples, these colours are used to emphasise the fact that there is something evil and wicked going on.

Low- key lighting is used to make it darker, as dark is connected with evil. Using this kind of lighting and colour creates an atmosphere that keeps you interested in the film, as you want to see what is going to happen next. The graphics also help to do these things as well, the film starts with white letters for the credits and a black background, each credit lasts for about three seconds, these colours are used for the credits because they are contrasting colours. The letters stand out and are very eye catching they are also representative of good and evil.

The first frame you see is Abigail sat bolt upright in bed, it is dark and shaded you can only see Abigail, this automatically makes you fascinated in the film, you want to know who this girl is. The girls get dressed and you see them come down stairs but they are behind bars this is showing us that the girls are imprisoned by their society and they are running away from it. Low-key lighting and dark colours are still used to create atmosphere and tension, the girls come out of their house and on to the dark and gloomy street.

There is only half light on the street, its early morning and misty, you can’t see a lot, the girls make their way to the woods, in the woods it’s night-time. Dark colour is still used to good effect, as the girls arrive there is a fire giving off a bit of flickering light, the chilling darkness signifying that evil is about to take place. The clothes the people in the village wear are very puritan, dark and plain; these dark colours in which they dress associate them to the church is also subconsciously connecting them with evil and witchcraft.

The clothes are long plain dresses and cloaks, the women also wear bonnets. Women would have not been allowed to wear anything short or sufficiently revealing as to show some flesh. The village creates an atmosphere that is quiet and perhaps dull but also potentially eerie. The houses are very plain; they are also gloomy and evil looking. Abigail is looked upon as the leader; she determines how far the actual witchcraft goes. Abigail is a lot more engaged in the witchcraft than the other girls, she takes the witchcraft seriously, she believes that if she casts a spell something will happen.

The camera is used very well in the first scene of this film; the director Nicholas Hytner uses a large range of camera angles to keep his audience interested in what is going on, there are about 100 frames used in this first sequence. The first shot we see is a close up of Abigail, this has a big effect on the audience as it creates the atmosphere straight away. Another shot that is used to create atmosphere is where the camera is panning across the sky and it slowly stops with the moon at its whole, this is used to give the feeling of evil and witchcraft.

Many camera frames are used in this film, some of the shots used are really important to the film, one of these is when the camera is lifted to a birds eye view in the woods, this is a crane shot. This shot gives you a very clear picture of what the girls are actually doing. They are all sat around in a circle and in middle of them there is a black pot, you can also see some markings that have been made deliberately on the floor; you can’t see exactly what the markings are, the markings contribute to the mysterious and evil feel of the film.

Other different camera frames used are close ups, low angles, mid shots, full view shots plus many more, every frame is important to the film. This film is a good indication of what life used to be like in Salem in the 1600’s. Witchcraft was taken very seriously then, perhaps due to ignorance and fear of the unknown, this is replaced in modern times by knowledge and science. The film is an interesting one to watch, it really keeps you on the edge of your seat and could be described as a chamber separating pure and impure or in this case good and evil.

It is thought provoking and raises questions about truth and evil and the power of the lie. It causes us to wonder about blind obedience to a law that may lead to order but not to justice. It demonstrates the power of sexuality and the destructive consequences of revenge. It warns of religious fervour left unchecked and shows human dignity and integrity as more important than any other issues. 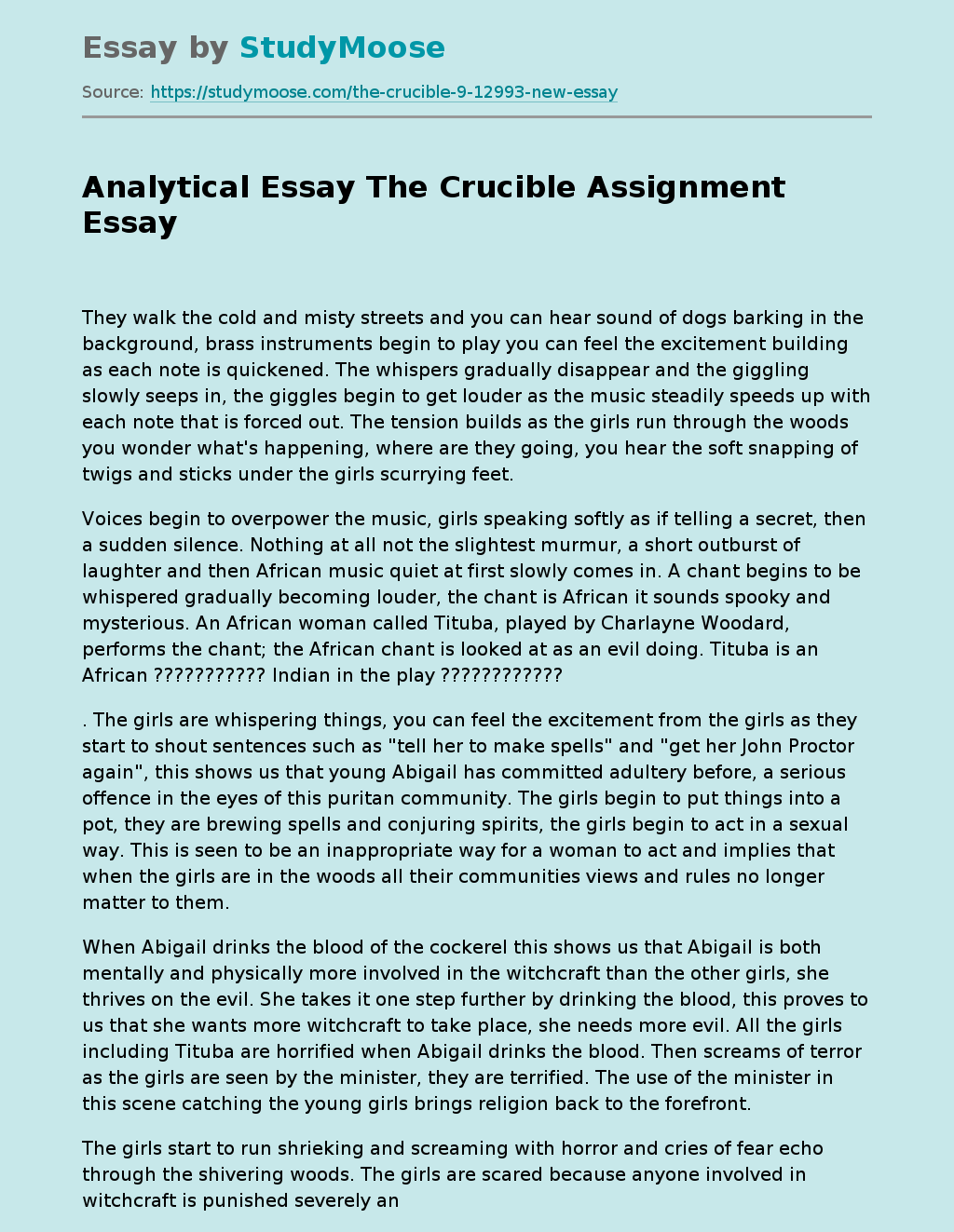