Sample Essay on The Crucible

The 4-act drama, The Crucible is the creation of one of the leading playwrights in the world Arthur Miller. It is set in the year 1962 when the trial of Salem witch had prevailed. The act outlines the nature of Puritan Village’s citizen who is to interfere in every other people’s lives. Through the show, Miller portrays repressive code of conduct of the people who injured the norms of behavior.

The show begins at Reverend Parris’ dwell where Betty, his daughter, is not well.

Don't use plagiarized sources. Get your custom essay on
“ Sample Essay on The Crucible ”
Get custom paper
NEW! smart matching with writer

He has summoned Reverend Hale, a provider of a cure for supernatural possessions, for he believes that his daughter’s illness is some sort of natural possession and Hale could help her with the cure. He believes so for he saw his daughter boogying in the woods with his domestic help Tituba, niece Abby or Abigail Williams, and other village girls. A hoax spreads that Betty is ill due to witchcraft, but Parris states to Abigail that he can leverage the rumor but cannot agree that his daughter and niece were swaying in the deep dark forest.

Reverend Parris discusses and structures that rumors with her that while they were dancing, one of the several girls was naked and Elizabeth Proctor, Abigail’s last employer, fired her for she thought she was immoral and due to any other reason.

Amidst the Act 1, John Proctor, the protagonist, makes an entry to find the condition of Betty. Due to the presence of Abigail, he feels uncomfortable. As the show progresses, the spectators find out that he was earlier involved in an affair with Abby and that’s the real reason why Elizabeth, wife of John, had sacked her.

Proctor leaves the place when he finds out Hale coming inside.

The next scene of the play takes place at the home of Proctors. There is frustration and anger in the air. Elizabeth still doesn’t trust John, and he has not yet forgiven himself. Hale enters their place with Salem’s authorities. They are here to arrest Elizabeth due to the blame of being a witchcraft made by Abigail.

The curtain draws, and people now have a look at act 3. John Proctor is seen convincing on one of the girls Mary Warren to acknowledge that they were faking the whole devil possession and witchcraft plot. She is then introduced to the court which is supervised by Hawthorne and Danforth– two judges who believe they cannot be cheated. Mary reveals the reality, but that is again veiled by Abigail Williams who shows up with other girls. Frustrated with the interruption, John Proctor brands the whole framing of his wife thing as the Whore’s Vengeance. He then admits his love affair with Abby, but she denies the same clearly. Frowned with what she had said, he asks the court’s permission to call his wife, as she is aware of the same and she could make the things clear. To protect her husband’s image, Elizabeth declines of any such affair which lands John behind bars.

Towards the end of Miller’s drama, the Crucible, John is shown chained in jail. A dozen members have been executed while Tituba, as well as, Rebecca Nurse await their turn. Elizabeth is in jail as well. Since she is pregnant, she’ll be executed after a year.

Hysteria begins for Parris as Abigail runs away from his place along with all the savings of his life. He realizes that if much-loved citizens viz. Proctors and Rebecca are hanged, villagers may react with sudden violence and anger. Parris, in the company of Hale, convinces the convicts to confess and save themselves from the capital punishment. However, the prisoners choose not to lie.

Danforth passes the order to execute both of them. They are taken to the executioner. Both the reverends seem destroyed. They both insist to Elizabeth so that she could plead John to confess and judges to stop his execution but she refuses to do so.

Sample Essay on The Crucible. (2017, Aug 30). Retrieved from https://studymoose.com/sample-essay-crucible-essay 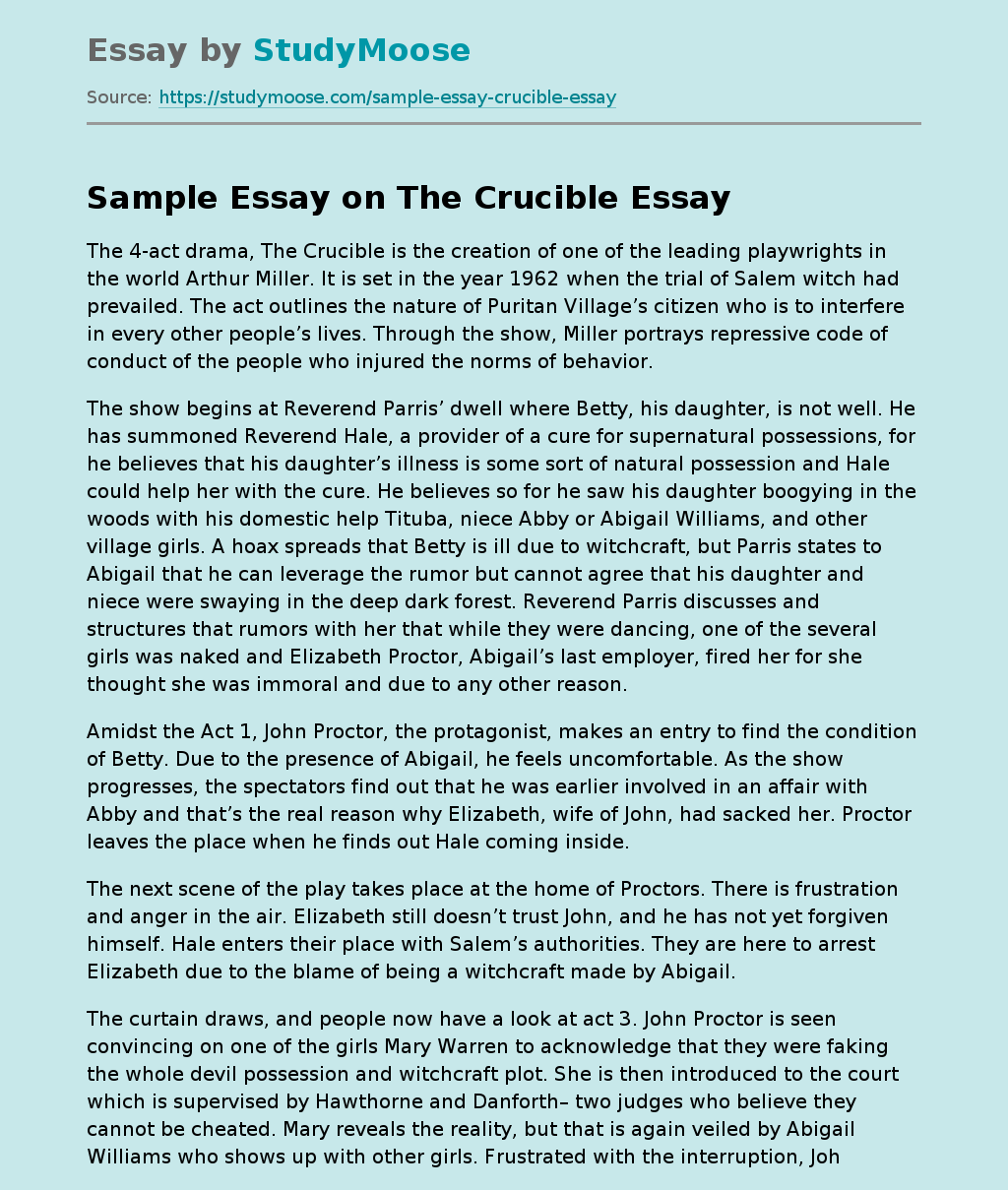