This paper provides an analysis of the play, focusing on the responsibility of the Salem community for the tragedy that unfolds.

THE CRUCIBLE Although Abigail and the girls initiate the tragedy, responsibility lies with the whole Salem community. Discuss. I do believe that Abigail and the girls initiated the tragedy, what with all their talk about spirits and the conjurance with the devil during the opening act. For one reason or another, it can be said that the blame for this tragedy lies with the entire Salem community.

Don't use plagiarized sources. Get your custom essay on
“ The Crucible Fear Essay ”
Get custom paper
NEW! smart matching with writer

But could this really be called a tragedy? In my opinion, if people get hurt and the whole community falls apart – then it is a tragedy. Many different emotions and even specific characters are brought into the play and each one holds part of the blame – therefore bringing down the entire of the community and causing people to turn against each other and all principles they once believed in. Abigail and the girls deny everything.

Part od their denial is accusation. By shifting the blame onto someone else, they believe that they will not be held accountable for their own sins. Abigail manipulates her way through the play, and even after Mary Warren confessed that the whole story was a pretense, Abigail continues manipulating the court room and the people within it with antics of ‘a wind, a cold wind’ and ‘Oh Heavenly Father, take away this shadow’. In the end she is adamant to convince the court that they were only involved with witchcraft because of Mary Warren, hoping profusely to save her own name.

Denial in Salem is considered a terrible sin. The narrow mindedness of the court possesses an unwritten law that if your name is brought out within the court, without any questioning, you are presumed guily. Innocence is not taken into consideration, and only until the victim confesses,, is the court convinced they were right. There is no hearing for the victim, and if they are innocent, they have the choice of denial, and being hung or confessing an being thrown into jail. Danforth, the deputy governor, is so caught up in his own beliefs and importance that he won’t listen to anything that he doesn’t want to hear. He is manipulated by Abigail, bu her innocent young girl front by incredulously questioning Proctor ‘this child would murder his wife?’ It is beyond his narrow comprehension that someone could be telling the truth. John Proctor stood up for his pride and principles. It is obvious that he would rather die with a good name within Salem than live and know that he had broken his own principles and lost his pride. He believed that among his own community he would be lavelled untrustworthy and states ‘God does not need my name nailed upon the church! God sees my name, God know how black my sins are”. From these comments, we know that John Proctor is an honest and trusting man who would do anything to save the name of himself, his family and his friends – even if it would conclude in his own death – ‘I have given you my soul, leave me my name….’ Maybe Proctor’s strong will to protest caused the whole tragedy to continue on for a longer period of time. Maybe if he hadn’t engaged in adultry, he wouldn’t have felt nearly as guilty that he had to go and stand before the court for his wife. It could be said that he stood up for her to prove that he still loved her and maybe to regain some her trust back. The Proctor’s weren’t the only couple with the tragedy coming between them. Thomas Putnam too was caught in secretly trying to obtain the land and fight Giles’s accusation of Putnam killing his neighbours to get their land. Goody Putnam is maliciously accusing Tituba of murdering all her babies. These babies at the time, were announced still born, but now that Tituba is in the public eye because of being linked with Abigail and the starting of the tragedy, she is blamed. Wild accusations are flying around Salem linking people to anything abnormal that has gone wrong. The absurd naming of innocent people becomes an ongoing threat to all within Salem. Francis Nurse is shocked that his wife, Rebecca – a pillar of the Salem community – has been named before the court by Abigail and the girls. In fact, the entire community is astounded when they hear the news of Rebecca Nurse being named. The act of people naming others, and then those others naming more people still, definantly had a impact on the tragedy, dragging the whole thing out, much longer than it needed to be. To prove that all these people were actually guilty also played a part in lengthening the tragedy. Herrick, Cheever and Danforth, all so full of their own importance and strictness of the court – ‘the law binds me….I cannot budge’ – ask question after question to each victim until finally the defendant breaks down and confesses to save their own lives. Even Hale who feels for the victims towards the end, knows the strictness of the court, ‘thought our hearts break, we cannot flinch, these are new times’. In conclusion, throughout the book, everybody in Salem wanted the whole tragedy to end, but one way or another, nearly everyone within the community had a way of making the tragedy continue on longer than it needed to be. 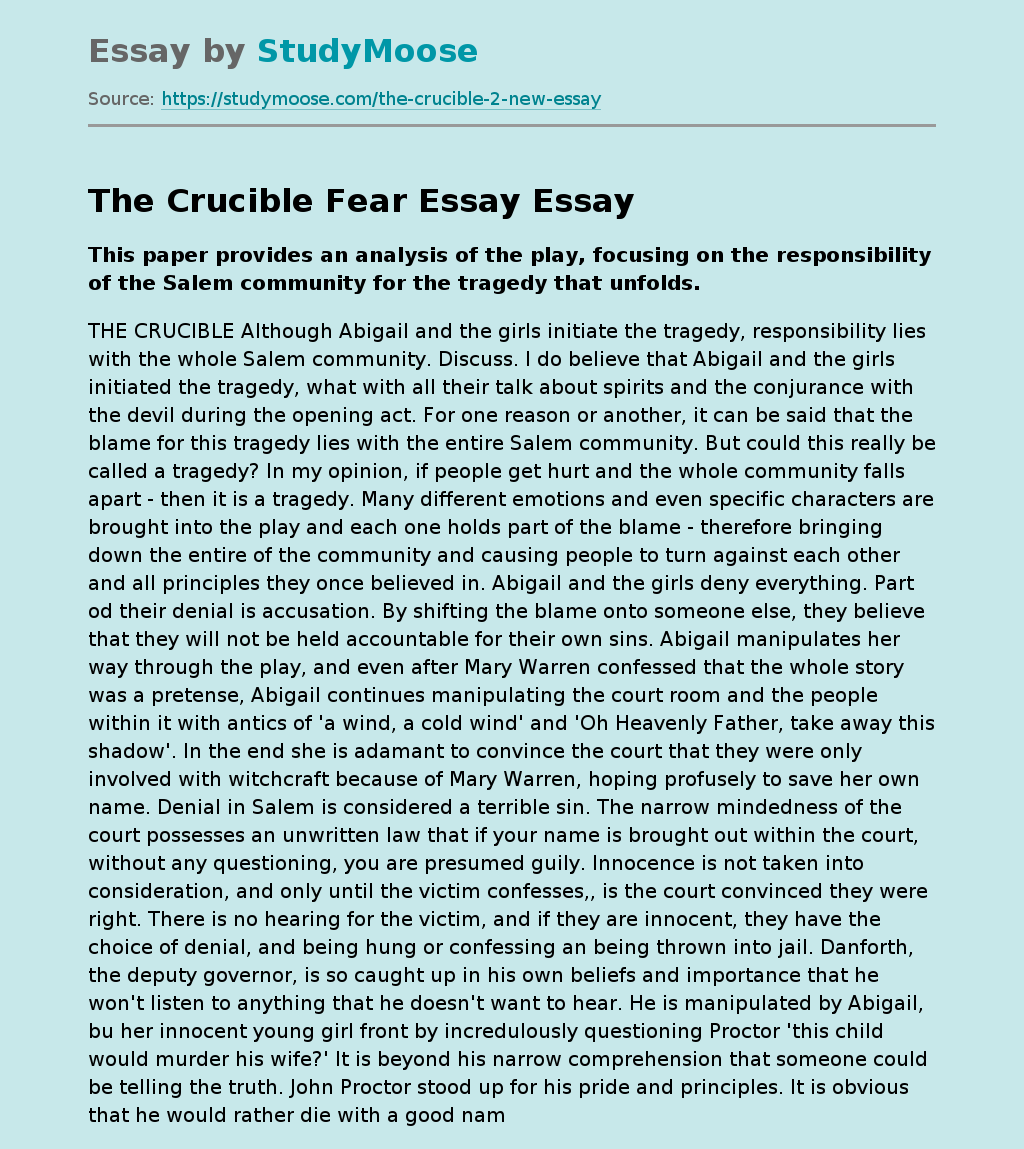