The Consumption of Illegal Narcotics

It is incredibly hard to define illegal narcotics, and what we classify as an illegal substance has perpetually changed and is continuing to change all through human history. Humans have been taking mind-altering substances since the beginning of time and below the facade of every society, there is some person selling, buying and taking drugs. Drugs can be religious and transcendental experience, they make us feel good, they can offer a getaway, they can take us into the unknown, they are also lethal (M.

Don't use plagiarized sources. Get your custom essay on
“ The Consumption of Illegal Narcotics ”
Get custom paper
NEW! smart matching with writer

Jay, 2010). Wikipedia defines Illegal narcotics as drugs which a person is not allowed to own or use. The law says a person cannot own a controlled drug without permission. A drug is any chemical that affects the human body or mind when it is consumed in any way. Individual countries and places have different laws about different drugs, and there are international treaties against some drugs. For instance, in Ecuador, cannabis is allowed. But in the same time, United States of America has a long history of prohibition – “war on drugs” and in most states, cannabis is illegal.

The war on drugs- a classical approach to drugs

In 1971, Richard Nixon said: “Public enemy number one in the United States is drug abuse. In order to fight and defeat this enemy, it is necessary to wage a new, all-out offensive”.

And this was the foundation of the War on Drugs. Nixon`s attitude was a moralizing one- drugs were essentially evil, and the goal should be a drug free world and archiving this will be done through an extremely combative set of policies.

This war will be fought on two fronts: first front will fight by the means of cutting supplies and second front, reducing demand through education and threat of criminal sanctions.

The aspect of threating criminal sanctions is one of the basis of classical criminology- in order to deter criminal actions, the punishment should exceed the benefit of the crime. Another notable aspect that should be mention is the “drug addiction” in the time of Nixon was seen as a human choice and addicts were seen as people lacking the will to quit their “bad” habits. This are problems with the classical position, the idea that criminals are fundamentally rational and offend due to desire for pleasure is one that will never gain universal acceptance. Classicism presume that people weight up the costs and benefits of their wrongdoings before they commit them-this may be true for some criminals, but for an addict looking for his next fix, this is not the case at all. This was, 40 years ago, when we knew less about how addiction works or what are the dynamics of drug trade and it is only reasonable that after all this years, we should query if the War on Drugs archived its aims. Did it decrease supply and demand and minimalized harm? (D.Nutt, 2010)

I looked into different countries approaches regarding answering the above questions.

In 2003, the No.10 Downing Street Strategy Unit produced an analysis of the harm caused by heroin and crack use in the UK, and gave a comprehensive overview of the supply side strategies employed in the War on Drugs. The report concluded “despite interventions at every point in the supply chain, cocaine and heroin consumption has been rising, prices falling and drugs have continued to reach users”. (D. Nutt 2009)

Regarding the issue of demand, UN estimates of drug consumption across the world from 1998-2008 show a substantial increase in opioids with more than 34%, cocaine with an increase of 27% and cannabis with 8% rise in consumption. (N.South,1999)

One more thing worth mentioning is in regards of the penalty aspect of crime, is, if criminalization diminished demand. If initially War on Drugs was presented as a war on producers and dealers, in practice the focal point has always been on users. Over the world two million drug offenders are at this time in jail-about a quarter of the total prison population. (After the war on Drugs-Options for control, URL-131, 2006) Regarding the harm reduction aspect of the War on Drugs, it is in fact now acknowledged that it has done the opposite: it has increased harm for pretty much everyone as shown in the 2003 No. 10 Strategy Unit Report. (A.Stevens, 2011)

So, as a conclusion, after 40 years of classical applied criminology on drugs, thousands killed, millions imprisoned, 2.5 trillion dollars spent we can now say that the War on Drugs has failed and furthermore, evidence shows it is the wrong tactic for harm reduction. It is time for a new method! (After the war on Drugs-Options for control, URL-131, 2006)

This is when we can talk about a positivist and a more scientific way in managing illegal drugs consumption. Once prohibition stops being the only approach considered there is a broad choice of options available. To begin with, there is a large difference between legalization and decriminalization. Take for instance the case of Portugal, where cocaine, heroin and cannabis are against the law but possession of small amounts doesn’t carry any criminal sanctions, like minor traffic offenses in the UK.The future of drugs

The next 20 years hold great openings for drug research and for improving our knowledge of the brain. Advancements in genetic sequencing innovations will make genotyping commonplace, and as we learn more about hereditary variations and vulnerabilities, will be able to give people far more data on which to base their choices about drug taking. .(Zubieta.2003) Dependence research has developed fast in the last ten years, although how far it manages to advance in the years to come will depend mainly on how well it is founded, and on a wider recognition of the medical model of addiction among governments around the world. Possibly, however, we could see leaps forward in the improvement of pharmacological substitutes, antagonists to help people quit, and pharmacological aids in psychological treatments. (D.Nutt,2012)

In my opinion, treating addiction and improving the treatment of addiction is one of the most promising lines of research. It is possible that in 20 years, we will have far more effective therapies to prevent relapse, and even prevent addiction occurring in the first place. As our understanding of brain circuits develops, we may be able to predict from brain scans the extent to which an individual will like a particular drug, or how difficult they`ll find it to stop. For example, someone who is found to have low numbers of dopamine receptors, could be advise to avoid stimulants, as they are more likely to find them extremely pleasurable. We might even be able to treat such people with the sort of virus that has been used to grow more dopamine receptors in rats, protecting them from developing or relapsing into addiction. ( N.McKeganey, 2011)

A controversial topic that is part of the drugs debate is the use of vaccines to make drugs ineffective, drugs like Narcan are already being used as an immune based approach to treat opioid overdose. This is a short term treatment with effects that lasts just a few hours. This approach is theoretically possible for almost all substances, but currently the technique to make the body raise its own immune response to a drug do not work as well as they do for vaccination against viruses such as polio

Vaccines for cocaine and nicotine are currently under clinical development. This approach has raised some controversial questions. Could we or should we vaccinate people to protect them from developing an addiction in the first place, just as we do with vaccines for polio and whopping cough. And even more controversial, should we administer these future vaccines to children to immunize them against drug and alcohol use. Is it violating someone`s human rights to take away their choice to experience pleasure from a drug at some point in the future.

In my opinion the future of drug faces two important uncertainties. First, whether decision in the future would be based on the latest scientific evidence or on the latest social views. And, secondly, whether the main focus for our use of drugs would be the enhancement of performance or the treatment of disease.

The Consumption of Illegal Narcotics. (2021, Oct 12). Retrieved from https://studymoose.com/the-consumption-of-illegal-narcotics-essay 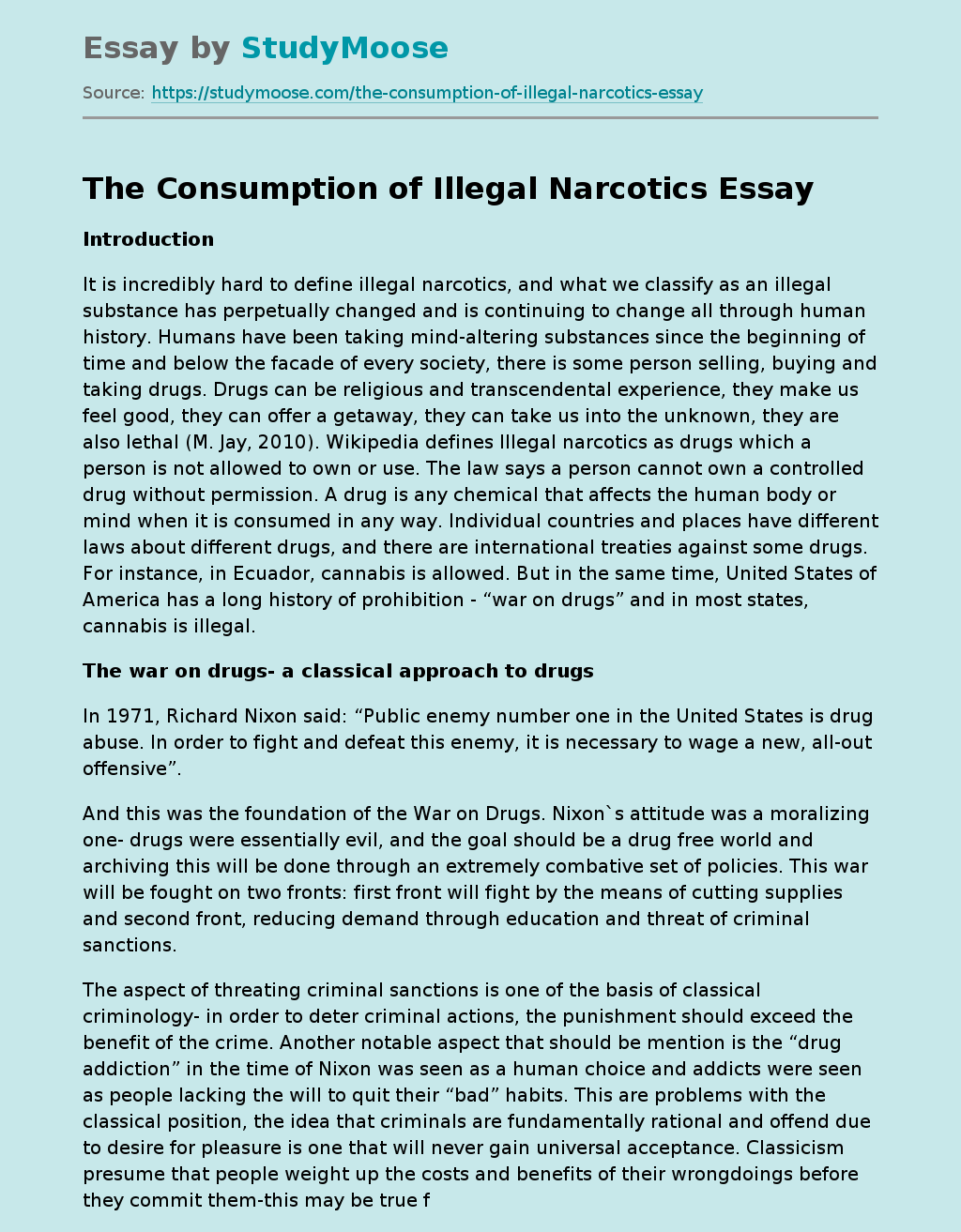