The concept of federalism

Also, federalism is a system based upon democratic rules and institutions in which the power to govern is shared between national and state governments, creating what is called a federation.

Don't use plagiarized sources.
Get Your Custom Essay on The concept of federalism Just from $13,9/Page

The exclusive Powers of State Governments are to establish local governments, issue licenses (driver, hunting, marriage, etc.), regulate intrastate (within the state) commerce, conduct elections, ratify amendments to the U.S. Constitution, provide for public health and safety, exercise powers neither delegated to the national government or prohibited from the states by the U.S. constitution. For example, the state governs setting legal drinking and smoking ages.

Federalism government is unique form of government because instead of the national government receiving its powers from the states, or the states receiving powers from the national government, both governments derive their powers directly from the people, or constituents. It is a system of government for the people, by the people. Powers Shared by National and State Government, setting up courts, creating and collecting taxes, building highways, borrowing money, making and enforcing laws, chartering banks and corporations, spending money for the betterment of the general welfare and taking (condemning) private property with just compensation.

How federalism was found you may ask? The founders of federalism attempted to balance order with liberty. There were several reasons why the federalist government was created. One reason was to avoid tyranny. Tyranny is a nation under cruel and oppressive government. Second reason was to allow more participation in politics. Last but not least the third reason was to use the states as “laboratories” for new ideas and programs. Alexander Hamilton, James Madison, and George Washington were the advocates of the federal system. The founders were reacting to the British government and the Articles of confederation. The British government is one in which power is concentrated in a central government. Even though local governments exist they only have the powers granted to them by parliament.

Federalism was great for this country for the fact that we the people have a say so in what is going on with are government. Also, there is not just one supreme government controlling all of the citizens in the United States. We have power to help vote who will be in are government and who will not be. Federalism allows us as a nation to focus on the big situations for example war with the national government so the states governments can handle the day to day life situations. If America did not have the federalist government then we would be more like china. Federalism keeps the American people happy for the most part. Everyone wants a say so in their life and Federalism gives the American people that.

The concept of federalism. (2016, Apr 13). Retrieved from https://studymoose.com/the-concept-of-federalism-essay 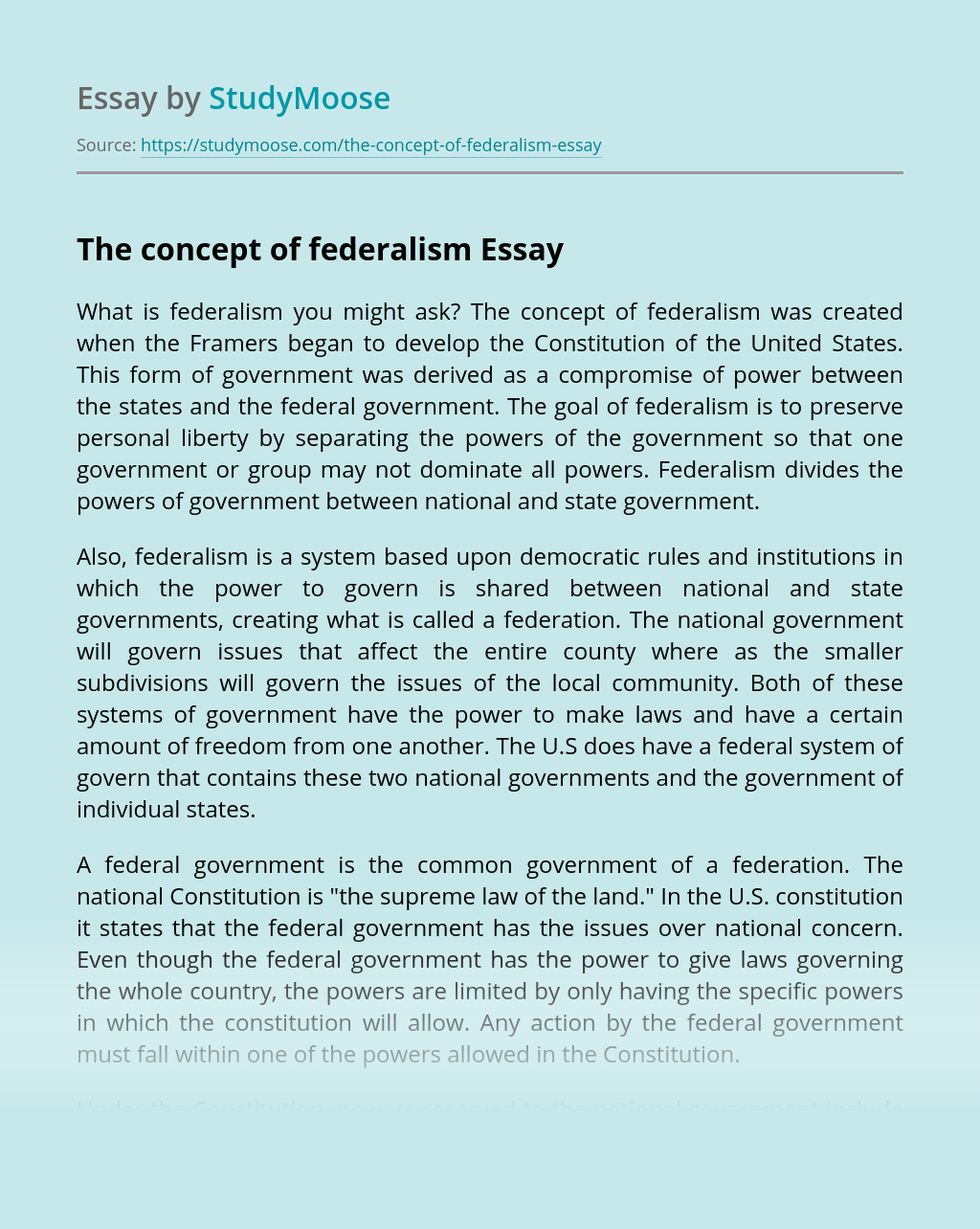 The Role and Impact of Multinational Corporations in the world economy

Before we will start our topic under consideration, let me draw generalized picture form our everyday lives. Imagine that you are coming back home from your lovely work. You are driving your Volvo car of 2002 model year, during this you are talking with your darling, by your new Nokia N97, and she promise to...

Get Essay
Advantages and Disadvantages of an Early Marriage

Below is a free essay on “Advantages and Disadvantages of an Early Marriage” from Anti Essays, your source for free research papers, essays, and term paper examples. Young people in modern society have completely different views on marriage. Ones prefer to get married at an early age; others, however, tend to postpone marriage until they...

Experiment to Investigate Osmosis in Potatoes

The aim of this experiment is to investigate the movement of water in and out of plant cells. The cells chosen for study will be taken from potato tubers. Firstly I will explain what osmosis is. Osmosis is the passage of water from a region of high water concentration through a semi permeable membrane to...

In what way does Charles Dickens win the sympathy of his readers for the children in his novels?"

A man born in the Victorian era in a working class family and environment, who had to work himself up from a working class child to a well-known figure that he is today. A man that is seen as a literary supreme, he is the senior of all the literary writers of his age. The...