The concept of challenging authority

The concept of challenging authority is explored in the two texts: Dead Poets Society (1898) a film directed by Peter Weir and Raw (1998), a novel written by Scott Monk.

Don't use plagiarized sources.
Get Your Custom Essay on The concept of challenging authority Just from $13,9/Page

Both texts involve an individual or group who challenge the authority of a certain power. The composers of these texts utilise film and literary techniques to broaden the audience’s understanding of challenging authority.

Challenging authority teaches important lessons. Following an individual’s challenge to authority, he/she may learn from their mistakes. This theme is reflected through the final chapter of the novel Raw, when Brett Dalton walks away from the fight with Caitlyn’s father.

This indicates that Dalton, by his initial challenge of authority, has assimilated that violence is not the answer: “He’d lost one fight but won another.” Monk’s use of third-person omniscient develops the reader’s understanding of how challenging authority can educate an individual’s pivotal lessons by allowing them to see how others feels. In the epilogue of the novel, Dalton admits that to many past wrongs, proving that challenging authority does indeed educate individuals.

Challenging authority often opens the possibility of the degeneration of the individual/group. An individual found contravening the rules of a higher power is punished, in turn physically and/or mentally harming the individual. In Dead Poets Society, this is evident in the scene of Neil’s death. Neil challenged the authority of his father by pursuing his dream of acting, and because of this, had his freedom stripped, culminating in his suicide. In the final moments of Neil’s life, Weir uses many uses dark lighting and non-diegetic sound to conjure a suspenseful and eerie atmosphere. This creates an emotional connection between the film and the viewer, further developing their understanding of the concept of challenging authority.

Challenging authority can however positively impact an individual by helping them discover their place in the world. This is seen in the final scene of Dead Poets Society, where Todd Anderson backs up Keating. By challenging the authority of Welton and becoming a member of the Dead Poets Society, Anderson displays his true colours, being the first to salute Keating. In this scene, Weir utilises low-angle shots on Anderson, representing him as a significant and powerful being, a juxtaposition to his helplessness in the beginning of the film. Furthermore, a montage of the student’s determined faces was included to demonstrate how challenging authority has also helped them grow as individuals. These techniques further emphasised the transitions of the characters through challenging authority.

Ultimately, challenging authority affects an individual in both positive and negative aspects. These impacts have been demonstrated through the Peter Weir’s Dead Poets Society, and Scott Monk’s Raw. The composer’s use of film and literary techniques assist in conveying their ideas by setting the mood and adding context. The protagonist’s challenges and changes reflect the importance and necessity of challenging authority.

The concept of challenging authority. (2016, Dec 23). Retrieved from https://studymoose.com/the-concept-of-challenging-authority-essay 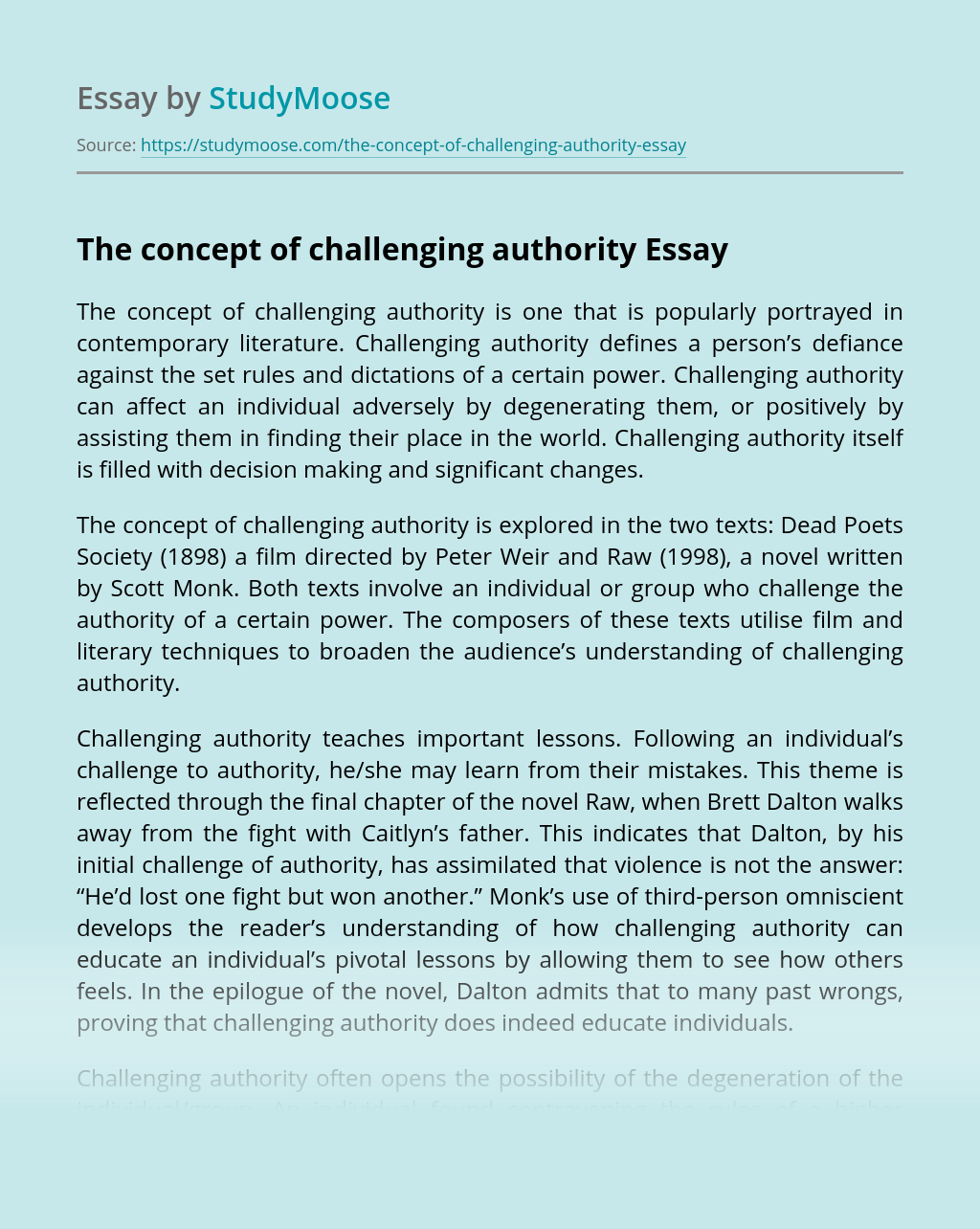 The film Finding Forrester was an interesting, eye-catching, attention grabbing and exciting movie. The writer Mike Rich did a great job of creating the plot to be funny and fast paced. The director of the film, Gus Van neatly directed the scenes characters to make the film more entertaining. Producers Sean Connery, Laurence Mark, and...

Famed for his mighty muscles, Hercules was the son of the mortal woman Alcmene and the god Zeus. Hercules performed many legendary feats of strength, the first of which came as an infant: when Zeus’s wife Hera placed two serpents in his crib, Hercules quickly strangled them. After he had grown to manhood Hera got...

In the film ‘Million Dollar Baby’,directed by Clint Eastwood is mainly based around the theme of how the important characters as vehicles to convey the theme familial love and support. This is shown when the theme is set up through Maggie and Frankie having broken relationship with their families, but it was resolved when they...

Dreams are the most amazing things in life, we all love to dream and we all love to hope and to see ourselves getting better and achieving more each day. Dreams are the only reason that makes people like me to be happy and force life’s obstacles. I always try to set my goals and...