The Concepts Of Power, Authority & Legitimacy

The political arena in modern times is often times fraught with dissension, treachery and agendas which are set in place only to forward individual means. These circumstances are not coincidental or without reason; in fact they are reminiscent of many conflicts across ages. Politics as a science has thus evolved through series of theories which attempt to formalise the process and circumstances which pervade the arena. We thus find there three key elements authority, legitimacy and power exist within the formalisation of theory.

Don't use plagiarized sources. Get your custom essay on
“ The Concepts Of Power, Authority & Legitimacy ”
Get custom paper
NEW! smart matching with writer

The idea of authority is central to any political order. (Stirk and Weigall, 1995:39)Authority in essence can be defined as the right to issue on command and, because the command is rightfully issued, citizens are under an obligation to obey. (Stirk and Weigall, 1995:39). Central to this tenet of authority is the idea that authority must have justice. This keys the question, what is justice? Which according to Plato is no different to asking what form of the state is idealistic.

(Stirk and Weigall, 1995:2). Platos conclusion suggested that the best form of the state is the moral reordering of the whole of society (Annas, 1881:13)

This suggests that morally society is to return to the way things ought to be in order for man to be the best version of himself and thus for society to be idealistic and perfect governance thus is achieved. This view contrasts starkly with the view of Thomas Hobbes who felt that Platos view was somewhat utopic and that the key to escaping the state of nature (which he viewed as largely pessimistic) was to institute a political structure whereby one individual was elevated to a position of antonymous authority (Stirk and Weigall, 1995:11).

This in Hobbes opinion was the only way we could ensure life would not be solitary, nasty, brutish and short. (Hobbes, 1996:89).

In examining the element of legitimacy it is crucial to note that no single universally acceptable definition exists. One might however attempt to answer the question why should the government be obeyed? Thereafter, it is plausible to consider the conditions under which obedience is ensured and authority is legitimate. (Simmons, 1979). This process would then deal with the reasons that citizens of a state ought to obey the authority of the day. John Locke postulated that consent is the primary criterion that makes government authority legitimate. (Simmons, 1979). A social contract thus exists between the government and the governed. Since consent is necessary from the citizens a ruler exceeding the scope of his authority would create a crisis of legitimacy.

Since men are free, equal and rational by nature, they could not be supposed to have submitted themselves to any arbitrary and absolute power. (Lock, 1967). Without consent citizens have no obligation to obey. If the government takes powers that is not granted to them they dissolve the contract between themselves and the people are released from their obligations to obey. (Locke, 1967)The final element in question is that of power. In its widest sense, the power a person has indicates their ability to produce intended effects upon the world around them to realise their purposes within it, whatever these purposes happen to be. (Morriss, 1987).

According to Machiavelli, the task of any ruler was to cheat the onset of political decay. (Stirk and Weigall, 1995:226). He postulated that in order to achieve this, the ruler of the day was not subject to a state of normal morality. Central to the governing of the state was the presence of good laws and good arms. In order for a ruler to achieve his purposes, Machiavelli would advocate that a wise Prince will take action in peaceful times in order to resist adversity when fortune changes. This force is the central tenant in the maintenance of power. (Bonadeo, 1973)Although the vast majority of political interactions and social relationships are riddled with an undercurrent of power, a crucial element is the more subtle form of social control embodied by authority. In this respect people comply with the wishes of others because they view the demands being made on them as being legitimate. (Stirk and Weigall, 1995).

2.Bonodeo, A. Corruption, Conflict And Power In The Works And Times Of Niccolo, Machiavelli. Los Angeles : University of California Press, 1973.

The Concepts Of Power, Authority & Legitimacy. (2016, Jul 05). Retrieved from https://studymoose.com/the-concepts-of-power-authority-legitimacy-essay 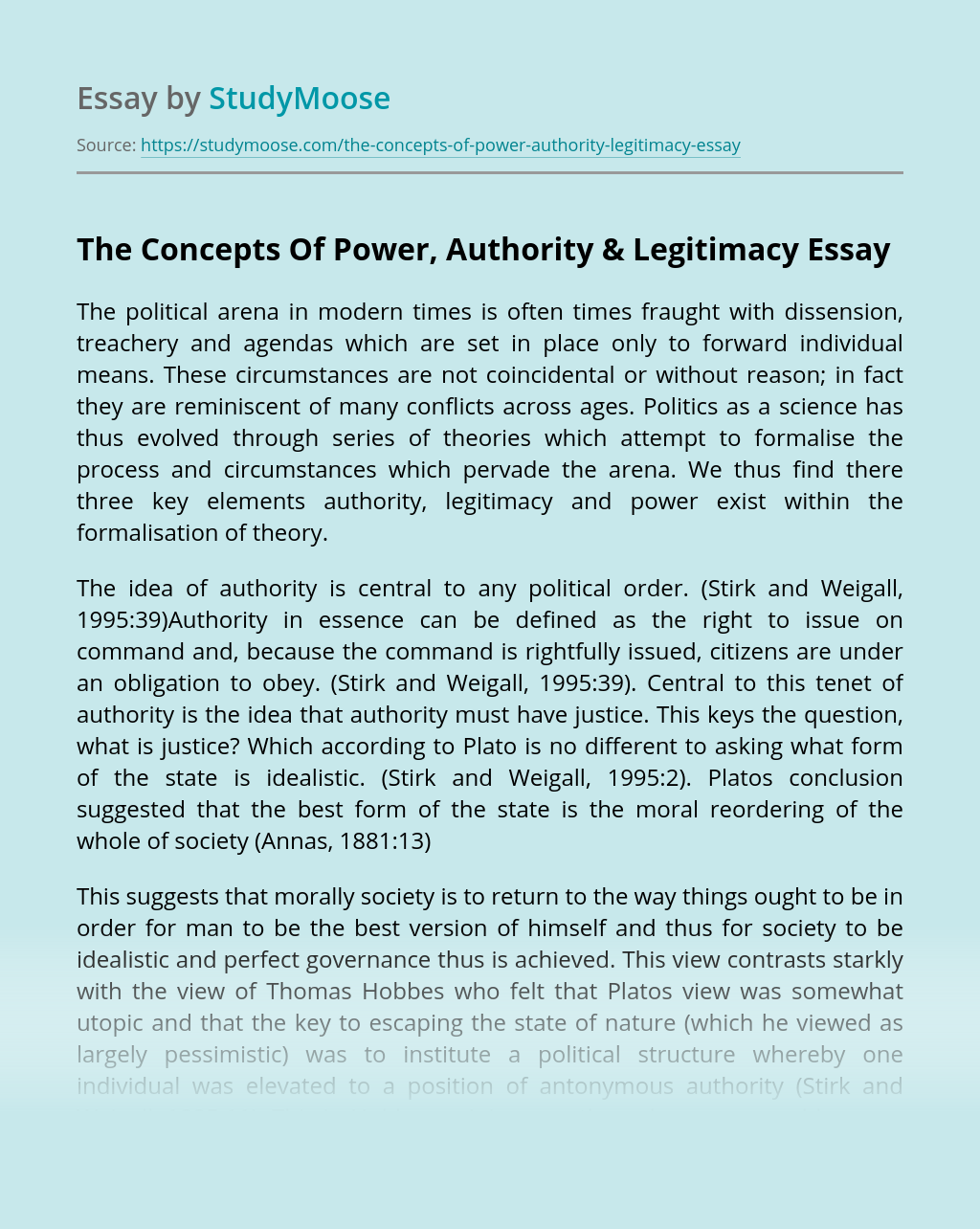