The Charge Of The Light Brigade Compared to After Blenheim

‘The charge of the light brigade’ written by Alfred Lord Tennyson in 1854 and ‘After Blenheim’ written by Robert Southey in 1796 are both poems which deal with the many aspects of war.

In this essay I am going to compare and discuss the poet’s use of ideas, attitudes, background, information, structure and language.

‘The charge of the light brigade’ written by Alfred Lord Tennyson after the battle of balaclava is about how a cock-up in the higher ranks led to the death of 673 brave soldiers and many horses.

Don't use plagiarized sources. Get your custom essay on
“ The Charge Of The Light Brigade Compared to After Blenheim ”
Get custom paper
NEW! smart matching with writer

Out of 673 horses 2 survived. This battle was one in the Crimean war, a war that the British were completely unprepared for. The total amount of dead were 20’813 however only 4’516 of these were caused by the battle, the other 16’297 were either caused by the heat, the cold, disease, or starvation. The lack of doctors and nurses let to the deaths of many more men.

The British Media told the country that the battle had been won to make them feel safe.

Alfred Lord Tennyson give a real senses of being in the battle, hearing the guns and the horses screaming with his fast pace and repetition he repeats

Making you feel surrounded by these cannons, you fell like you are one of the soldiers charging at the enemy ranks.

I think that the poet it bitter about this was and the whole ranking of authority, those with a high amount of money were highest ranked and the soldiers consisted of peasants off the streets. However those with money are not necessarily ones with lots of military knowledge and thus leading to the tragedy that occurred at balaclava. Captain Nolan tried to stop the charge as he saw they were charging the wrong valley and was shot by one of his own men. line 10 “Was there a man dismay’d ?” refers to captain Nolan and the fact that he failed to stop the charge. I also feel that the Poet is questioning the duty of the light brigade

“Storm’d at with shot and shell,
Boldly they rode and well,”

even though the they were being shelled they still rode on bravely. He also says

The soldiers duty’s not to question authority, its not to use common sense, they just do what there told and die, like pawns on a chessboard manipulated by the hands of their superiors. At the ending of the poem the pace slows and the repetition changes

“Then they rode back, but not
Not the six hundred. “

This emphasizes the fact that the vast majority of the light cavalry brigade have been killed of Marjory wounded.

Robert Southey, the son of a linen draper, was born in 1774.Between 1796 and 1798 he wrote many ballads, including after Blenheim.

The battle of Blenheim (after Blenheim) was written in retrospective to that of “the Charge of the Light Brigade” poem written by Alfred Lord Tennyson which was written just after the war.
After Blenheim is about a Grandfather and his Grandchildren who stumble across a buried skull in the fields and the grandfather tells them about how it got there and why it is in the place it is, occasionally referring to the “Great Victory”.

I will now compare the attitudes to war in after Blenheim by Robert Southey and Charge of the Light Brigade by Alfred Lord Tennyson.

Both poems are different “Charge of the Light Brigade” sets the scene and puts you right at the front of the action with the order ” half a league, half a league” giving of the vibe of instant blood shed in a sinister battle scene.

Whereas the atmosphere in After Blenheim is fairly tranquil picturesque summers evening which soon becomes grim and sinister when Old Kaspar verifies what Peterkin comes across. ”Tis some poor fellow’s skull”. The writer introduces death with innocence meaning war doesn’t kill the evil it diminishes the innocent too.

In Stanza 4 Old Kaspar’s Ploughshare often has turned the remains of old soldiers who where slain from the great victory. I think the writer feels as if all war does is create death and produce higher figures on death toll counters.

In Stanza 7 We discover that Old Kaspar’s father lived at Blenheim then, but they burnt his dwelling to the ground, but his family fled but in the end had nowhere to rest their heads. I believe the writer’s attitude suggests war rages anger and influences death.

“With fire and sword the country round was wanted far and wide” means that even the land was destroyed in the battle ground and all around as well, many a childing mother then, we soon find out in this poem that it wasn’t just soldiers that were slain in the war often children were too.

The writer seems to be glorifying war by constantly repeating the line” it was a famous victory” But strangely Old Kaspar doesn’t know why it was such a famous victory which makes the reader want to find out even more because they get intrigued by not knowing why the victory was famous.

In stanza 9 Old Kaspar says “it was a shocking sight after the field was won “what the writer means is that there were was a lot of blood shed during battle and after woods a large amount of rotting corpses remained from battle, it gives of a sense of fear and makes you think about the battle and the feelings going through the soldiers heads.

“For many thousand bodes here lay rotting in the sun” shows how many people died which incorporates violence into the play and gives the readers a thought of what it may look like.

In stanza 10 Whilemine Old Kaspars grandchild says “war is a wicked thing” which it is because death tolls sore when severe warfare breaks out and it petrifies people if war gets bad enough.
But Old Kaspar refers to the battle as a great victory once more.

In stanza 11 the writer’s final words to finish after Blenheim are somewhat mysterious and add a little twist like a cliff hanger effect in the final stanza to make you want to know what the real purpose behind the battle was which is very griping and devious.

“Everybody praised the duke who this great fight he did win” but what was the purpose of this battle quotes Peterkin and that remains the writers biggest secret in After Blenheim as he refers once more as calling the Battle of Blenheim
“The famous victory”.

This concludes my essay on the poet’s attitudes to war in After Blenheim by Robert Southey and Charge of the light brigade by Alfred lord Tennyson.

The Charge Of The Light Brigade Compared to After Blenheim. (2017, Nov 10). Retrieved from https://studymoose.com/the-charge-of-the-light-brigade-compared-to-after-blenheim-essay 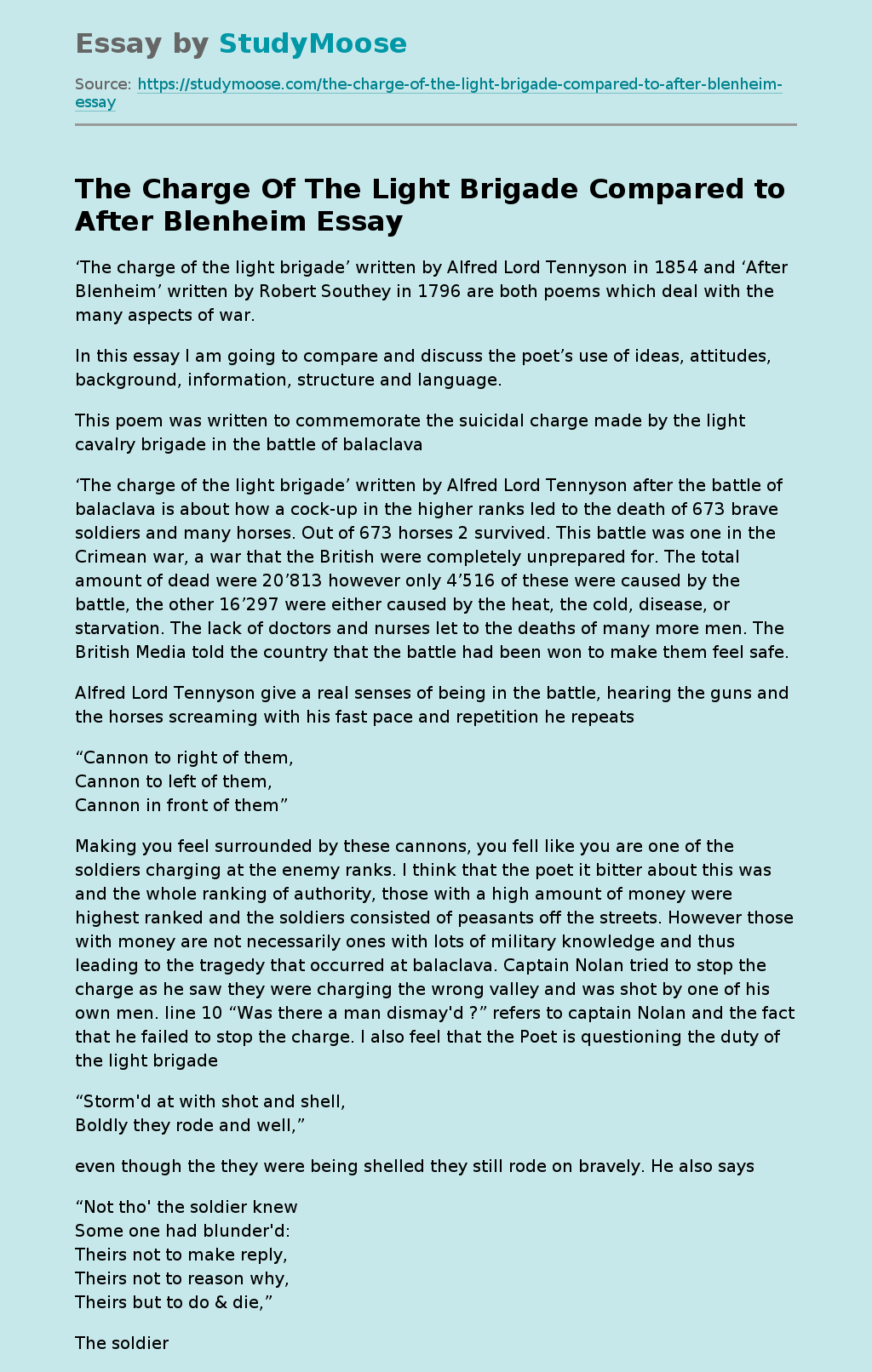