The Causes of Drug Abuse Among Teenagers

Drug abuse among teenagers continues to be a major problem in many societies all over the world. Everybody knows bad things can happen to drug users. Instances of school dropouts, addiction, and teen violence continue to highlight the depth of the drug problem amongst teenagers. They can have serious or even fatal health problems. They can ruin their personal, social and professional lives. They may even end up in jail. But why do young people start taking drugs in the first place? What are the causes of drug use among young people?

There have been different reasons that have been fronted as to why drugs find their way into the lives of teenagers.

Don't use plagiarized sources. Get your custom essay on
“ The Causes of Drug Abuse Among Teenagers ”
Get custom paper
NEW! smart matching with writer

These are just a few key factors that play a role in teen drug abuse. Many more causes are to blame as well.

One major cause of teen drug consumption is peer pressure. Much has been said about peer pressure and how it makes teens conform to what their peers are doing. Young people take drugs to feel cool and impress their friends. If your friends all smoke marijuana, you will probably be expected to smoke it too. If they snort cocaine, they will offer it to you. They may tell you that you are scared or acting like a baby if you don’t want to try it.

This push to do as your friends are doing has a very strong effect on young people who don’t want to appear uncool to their friends. Some kids will do whatever their friends do, just to fit in and follow the crowd. They don’t want to be the only one not doing something, even if it is something dangerous, like taking drugs.

Another cause is simple curiosity or just to experiment. Many teens have heard about drugs, and they are curious to experience them for themselves. They have heard that drugs can be fun, or make a person feel and act different. Maybe they have seen their friends or family members behave differently while on drugs, and they want to see how it really feels. We see drugs on TV and movies everyday. Many young people encounter them at school, at home or in their neighborhood. It is not unusual to be curious about something you see and hear about so often, so many people first try drugs because they are curious about them.

Another reason young people take drugs is to escape their reality. Maybe their home life is not very happy. Maybe they have a boring job, are not doing well in school, or are just not happy with their life for whatever reason. For many people, drugs are a way to escape that unhappy reality. They can feel a little braver, stronger, a little smarter, more beautiful or more important. Of course this doesn’t last long, but that doesn’t matter. For the brief time that the drugs are taking affect, the user can forget about the problems, responsibilities, and limitations of everyday life and escape to a fantasy world. It is no secret that drugs can change the way you feel; this is why they are so attractive to young people despite their dangers.

Media also plays a role in why young kids begin drinking and smoking. The media has been keen in promoting (for the sake of advertisement revenues) drinking and smoking as cool. Also, pharmaceutical companies have been promoting both prescription and non-prescription drugs as beneficial to the lives of the users without giving clear guidance on the usage and their potential abuse. The media has also indirectly supported drug abuse by playing music or showing movies that glorify drug use. Once teens follow the lives of their role models as portrayed in the media, they find themselves in a trap which they are unable to come from.

The need to feel grown up and to be like an adult may also cause a young child to start using drugs. To a child, growing up means freedom, and making their own decisions. It means being able to do what they want to, and using drugs may make a child feel older.

Lack of proper family guidance also contributes to children using drugs. Stacey Shultz states that “In a 1999 survey of nearly 10,000 parents and teens by the Partnership for a Drug-Free America, teens who received antidrug messages at home were 42 percent less likely to use drugs”. But today, many kids are left wandering without proper guidance from their parents. This means that children are left unattended and any confusion that they may experience are not handled with the dedication that is deserved.

None of these reasons are worth losing one’s life to drug addiction. Substance abuse destroys relationships, results in job loss, failure in school, causes legal problems, health problems, and can lead to violence and death. Unfortunately, many young people become involved in drugs before they are fully aware of the health risks and power of addiction on one’s life. They need to understand the ways young people first become involved with drugs so they can be aware of them. Many curious teens have died the first time they tried drugs, others find their temporary escape become a permanent addiction.

The Causes of Drug Abuse Among Teenagers. (2020, Dec 07). Retrieved from https://studymoose.com/the-causes-of-drug-abuse-among-teenagers-essay 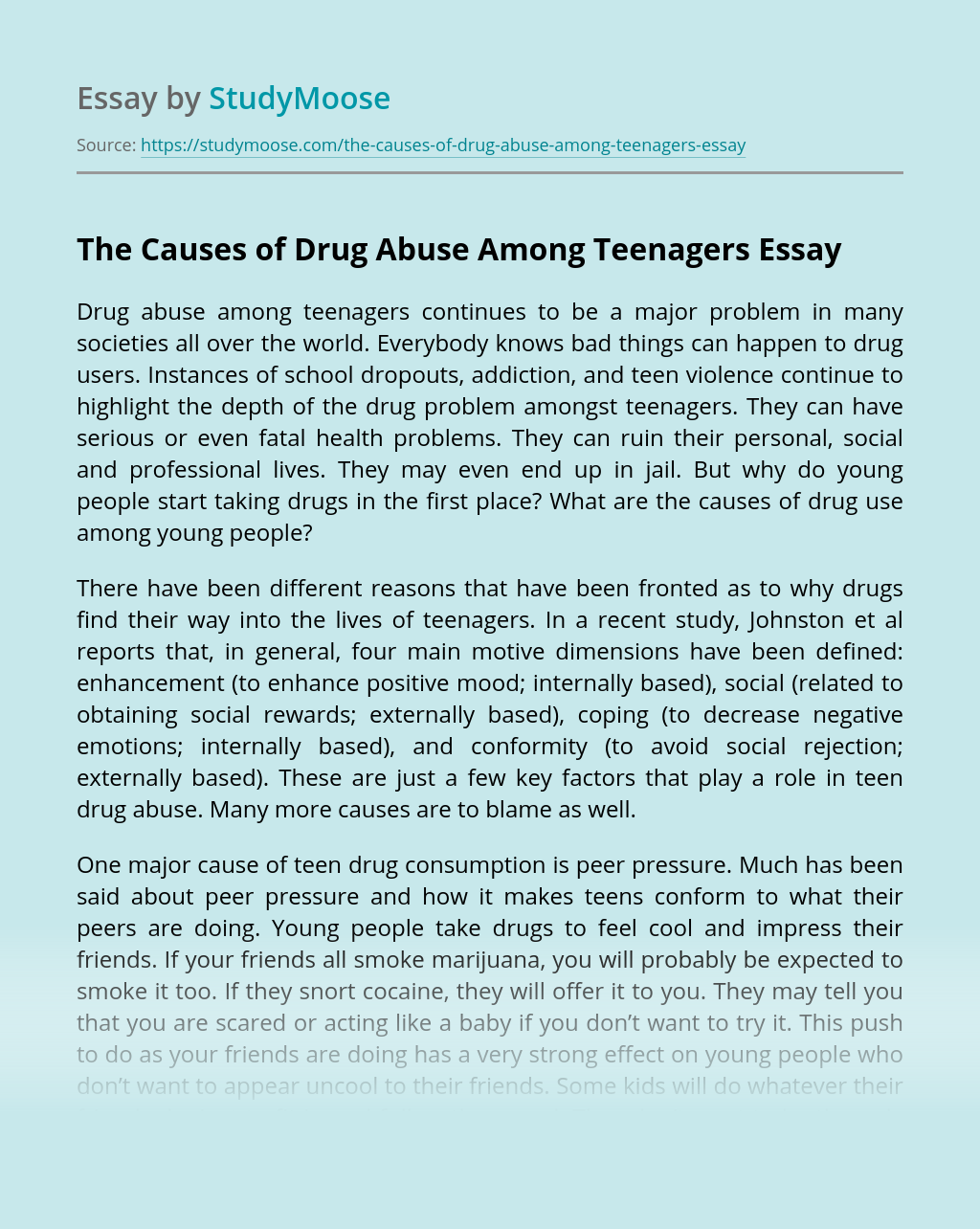