The Boston Photograph By Nora Ephron

In Nora Ephron’s essay “The Boston Photographs,” she argues that readers should be provided with raw footage of what is really going on in the world around us on newspapers, even if the photographs are those of death of people. Nora Ephron writes about three very controversial pictures of a rescue attempt that failed in Boston which later on appeared on the news showing a 19 year old lady who died in the event. Ephron’s analysis of these pictures and public reaction in her essay show that she thinks, public reaction to the story would have been different under different circumstances.

For instance, if the women survived people would have admired the pictures more. However if the child died too, the pictures would have received more complaints. Ephron believes many papers fail to show the truth, the reality that death is a main event in one’s life.

For instance, a newspaper will publish a picture of cars involved in the car accident; however the crushed cars aren’t the significance of the story, but the people who died in the accident are.

Ephron explains that this is how photojournalism can be more impacting than written news. According to Nora Ephron, these pictures should be published because they are a part of the story such as the story is itself. According to Nora, these pictures should be published in order to teach the readers a lesson. She tackles a very important argument in her essay. The question of if news organizations should publish graphic images of tragic incidents, or err on the side of caution and withhold them has been itself a dilemma.

I think it is totally irrelevant for newspapers to print out pictures of death people nowadays. It should be pointed out that death in itself is not such a rare phenomenon to rate much attention in newspapers, unless someone famous is involved. It is tempting to think that these stories maybe reported only because of the catchy pictures and not because of the news value they carry.

Nora argues in her essay that publishing these pictures give the readers a complete view of what’s happening around them. If these institutions are given full right to publish such pictures, sooner or later the value of the information on our newspapers will be lost as these companies may turn to publish more catchy pictures in order to attract more readers forgetting about the value of the written news itself as they compete with each other. As such I totally disagree with Nora Ephron’s argument that these pictures be published. Also these pictures of death people or how they died should not be revealed. I think revealing these pictures and letting newspapers for a long time is particularly less humane to the friends and family of the deceased. I know if someone in my family or friends suddenly dies, I really would not want any of their photographs to be published to the public as this may act as a constant reminder that you lost someone.

Also as Ephron wrote in her essay, publishing these photos invades both the privacy of the deceased and their close ones. This act is also very disrespectful as these news firms may even go to the extern to buying these photos from those who may have witnessed these tragic incidents and make videos or take photos using their smart phones. It is undoubtedly correct that these photos at times may carry more meaning and convey the information faster. However, these photo publications of people taking their last breath are usually more traumatizing and agonizing, bringing fear and freight in the society. However, the importance of photojournalism cannot be undermined as it easily conveys the information to the public and attracts more people into reading the news since they are usually catchy, attractive and relatively have a greater impact on the public at large compared to written journalism.

The Boston Photograph By Nora Ephron. (2016, Dec 19). Retrieved from http://studymoose.com/the-boston-photograph-by-nora-ephron-essay 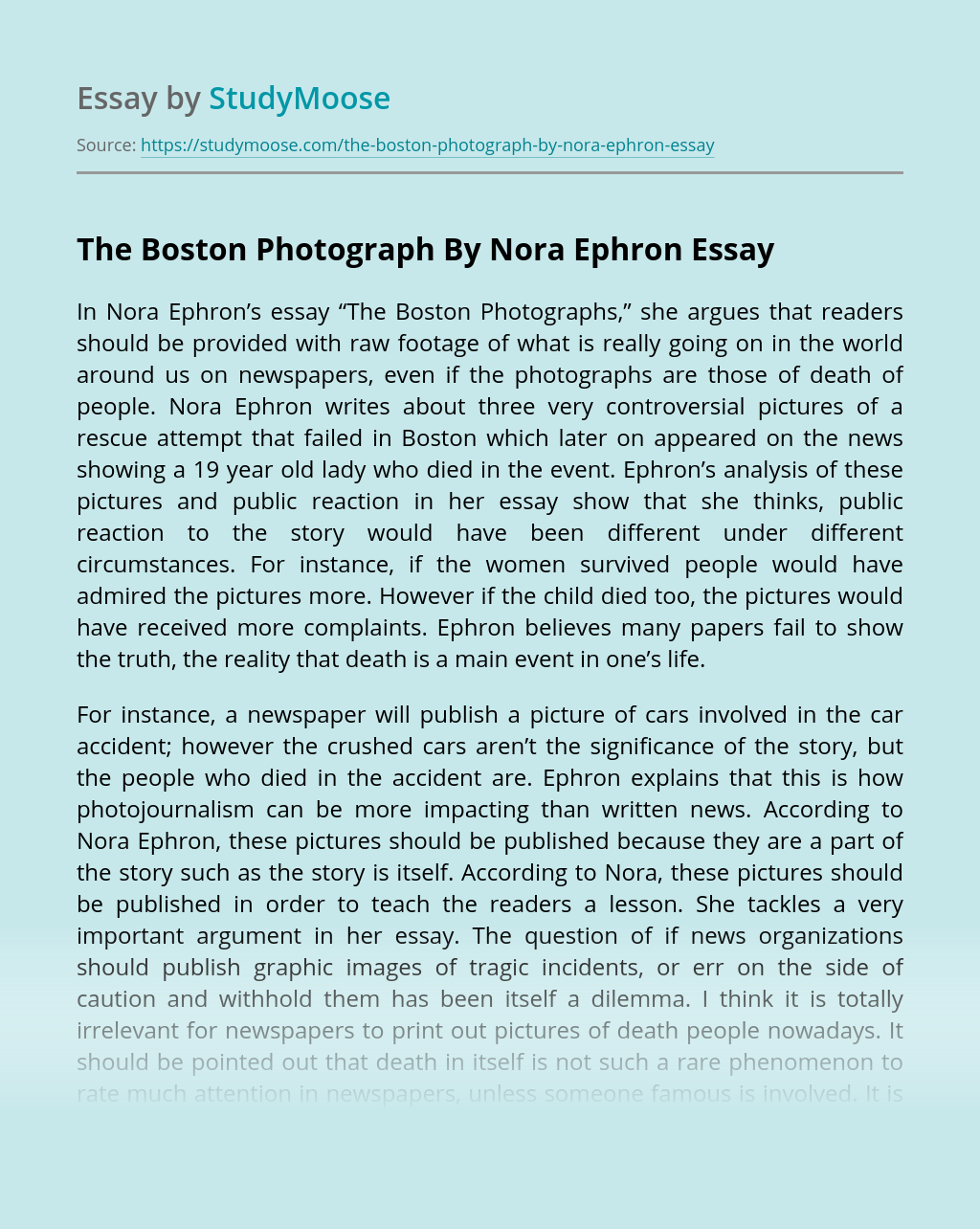 Don’t waste time
Get a verified writer to help you with The Boston Photograph By Nora Ephron
Hire verified writer
$35.80 for a 2-page paper
Stay Safe, Stay Original