I am going to evaluate the biological perspective and social learning theory (SLT) as my 2 psychological approaches to health and social care service provisions. The biological approach is a very closed minded as it can only really be used in health care settings as this is what it was designed for there are many different types of health care: in the GP surgery it can be used because the main points of the theory is that medication must be used to cure illnesses and that is the GP’s main role, to prescribe drugs to cure illness and disease, both the theory and the GP will use medication as the main cure.

Don't use plagiarized sources.
Get Your Custom Essay on The biological perspective and social learning theory (SLT) Just from $13,9/Page

The biological approach can also be used by nurses in a health care setting such as a hospital they use it when treating patients with medication as they don’t really have much input in the diagnosis stage of the illness then they don’t really look at the causes for the illness, genes/DNA and chemical imbalances. It will be used by all professionals in health care settings as this is what they are taught when learning the profession, this will be from consultants to practice nurses.

The biological approach can be used lightly in a social care setting, such as a primary school or day care centre, very little but one aspect of the theory that can be used is Gesell’s maturation theory as it helps social care professionals notice whether a child is following the norms of growing up such as walking and talking by a certain age and it helps to get any unseen conditions noticed in the child so as it can be treated/cured early so less of a lasting effect on the child’s health and well-being.

The effects of shift work affects many health and social care professionals that work night shifts, for example nurses for health care and care home carers for social care, an unpleasant physical side effect occur due to our biological rhythms being disrupted for example our temperature goes down when were sleepy and this means that night shift workers who are tiered will be cold which isn’t a very good to help them concentrate on the task at hand. This is part of the biological approach that affects both health and social care professionals in a negative way.

occupational therapists, physiotherapists, speech and language therapists and all sorts of other therapists in a health care profession will use both the biological approach and social learning theory they use the biological approach when looking at the cause as well as SLT as they could see that it’s a genetic thing that is causing the problem, such as Parkinson’s disease, and they also use social learning theory as you can learn something such as the way you walk from a family member even though there is no genetic link to this, e.g. muscle problems in the feet with parents could cause them to walk in a certain way and the children could have no muscle issues but still walk the same way due to learning this as a child.

Social learning theory (SLT) can be used in a great number of settings both from the health care and social care sides. Some health care settings are mentioned above but it can also be used in others, it can be used in a GP surgery as some GP’s do look at other causes for illness for example the environmental causes such as pollution and damp/poor housing causing asthma and other respiratory problems. When GP’s prescribe medication they could be following both approaches as they are following the biological approach in the first place when prescribing the medication but when they prescribe the drugs they could be being a positive role model for the patient as they are promoting good health through encouraging them to take the medication to cure the illness/disease. This is the GP following both the biological approach and social learning theory. And when nurses give the medication to the patient they are also being a positive role model and therefore using both approaches.

Social learning theory can be used in social care settings much more than in health care settings as more aspects of SLT follow that of a social environment, like a primary school it can be used in this setting as teachers can be positive role models too in the idea that they promote good behaviour and smart dress/uniforms. SLT can also be used in many other social care settings such as day care centres for example they can use the self-fulfilling prophecy aspect of SLT in the idea of telling a child that they are good and well behaved it might influence them to stay/go this way in future life due to the fact that this has stuck in their head and they want to fulfil this idea.

In can also be used in a special school for children with additional needs, like in Pathfields School in Barnstaple as they use self-fulfilling prophecy in a positive way, we saw this when on work experience when swimming as if the child took part in a swimming race at the end of the year then they would get a medal or rosette no matter what place they came as this was fair as well as the fact that they wouldn’t feel like a loser and therefore bad at swimming and therefore stick to this negative label and never swim again or have low self-esteem when it comes to competitions due to the fact that they lost this one.

The biological approach isn’t very effective in social care settings when it comes to behavioural issues such as ADHD as the people who would prescribe medication such as Ritalin, GP’s, as they don’t see the effect of it when in social care setting such as a school so therefore they think it’s the best course of action for a treatment but when in actual fact it’s not right for this child. Whereas social learning theory can deal with behavioural issues in a very positive way such as self-fulfilling prophecy as with behavioural issues you can be tempted to call them naughty but this could have a negative impact on the child’s future behaviour as they might have this thought about themselves due to being called it once and therefore they become worse and therefore no treatment or amount of help can deal with this issue. Another point that SLT will say is that they copied this behaviour from family or friends in school as they believe in observational learning.

All aspects of each theory links in with either a health or social care setting or possibly even both, for example observational learning can be put into both health and social care settings as in a health setting it could influence individuals to copy the behaviours that they see the doctor perform and the same idea for pupils copying the behaviour of the teachers, this is a positive aspect of Bandura’s theory of observational learning. Role models and self-fulfilling prophecy have already been explained for both settings, and the last aspect of SLT is role theory, in a health care setting this can be a nurse adopting the role of being warm, kind, caring and competent, and in a social care setting it can be the idea of a teacher being wise, helpful, knowledgeable and experienced.

With the biological theory all the aspects can be used in a health setting but not necessarily in a social care setting. Maturation theory (Gesell), and work shift patterns have both been explained for both health and social care settings but other aspects of the biological theory such as medication is the cure for everything, genes/DNA and chemical imbalances are the cause for illness and disease can only be really placed in a health setting as most social care settings have a more holistic approach where they look at the bigger picture like the SLT does. This is why i think social learning theory is the better theory as it can be used in a much wider amount of settings to help explain everything from illness/disease to explaining negative behaviours such as behavioural issues in children or bipolar in adults. 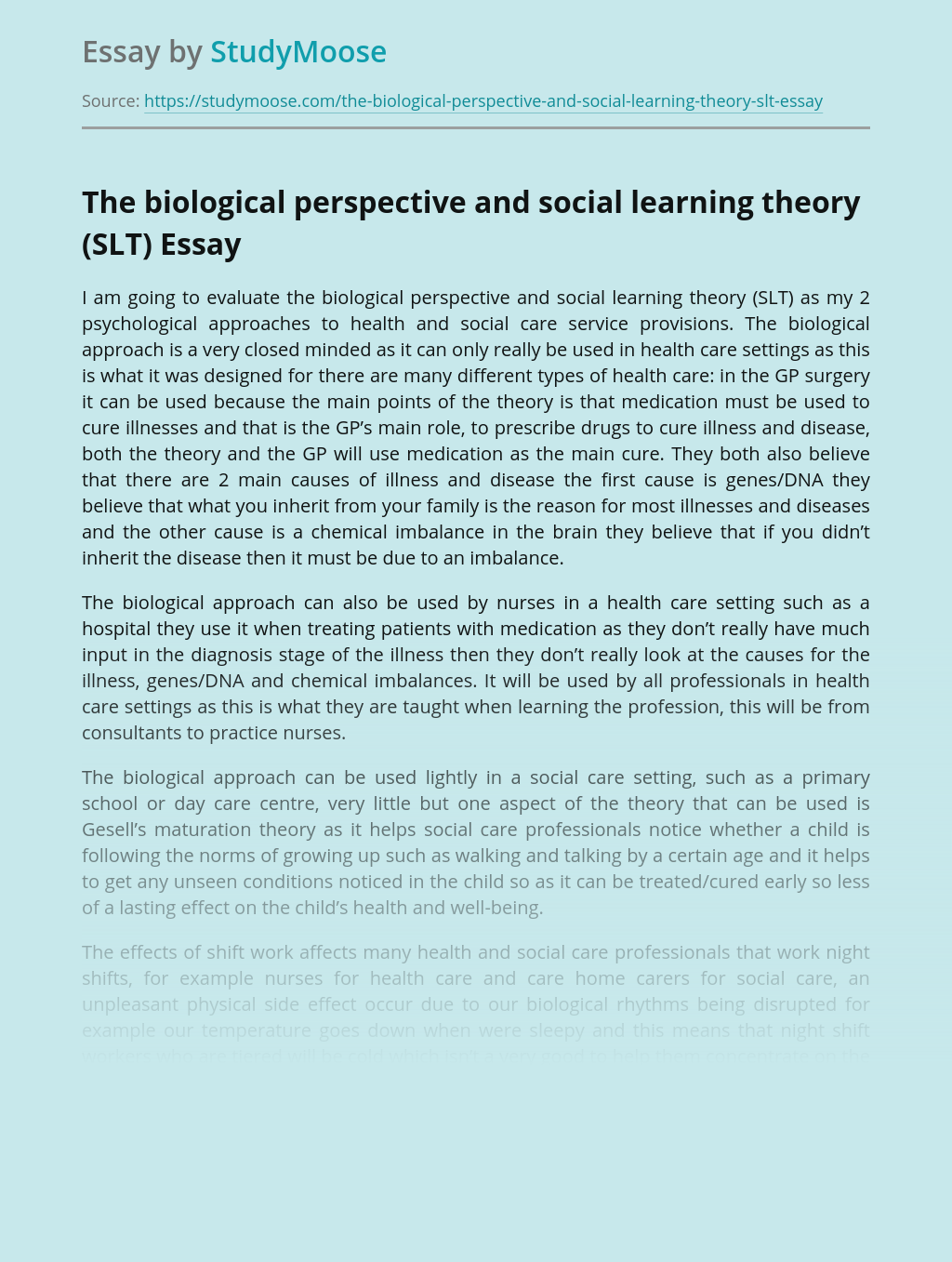 Abstract In this paper, we found a solution for water wastage in home by using ARDUINO UNO. Here, the water arrival intimation will be given by GSM via SMS. The tank level can be monitored through the application and can be switch ON/OFF the motor by Application via IOT . When the Sump reached maximum...

View sample
A Case Seen in a Pre-Hospital Setting

Reflective account of a case seen in practice in a pre-hospital setting Introduction I am a Paramedic registered with the health & care professions council (HCPC) and this essay will look reflectively at an incident I attended during the course of my duties. This case reflection aims to reflect on an encounter with a patient...

Organizational Motivation Plan Motivation is defined as forces within the individual that account for the direction, level, and persistence of a person’s effort expended at work. Direction refers to an individuals’ choice when presented with a number of possible alternatives. Level refers to the amount of effort a person puts forth. Persistence refers to the...

View sample
District level decentralization and its implications for rural

1.2. Statement of the Problem Many scholars claim this over-centralized system as one of the reasons for public sector governance inefficiency and ineffectiveness in public services and citizens’ living under poverty (Dickovick and Tegegne, 2010). Under EPRDF, in order to address the failures as well as the challenges of decentralized public governance, the government has...