They are also resourceful, child-like, and kind. The BFG is the only giant in his homeland who does not eat humans because he thinks that would be inhumane. He would rather eat disgusting vegetables than take another life. He also is resourceful in that he uses his job as dream catcher to enlist the help of an authority figure, the Queen of England, to stop the evil giants from eating children. His child-like personality is seen in his gentleness with Sophie and in his fear that she would tell on him.

His kindness is evident in his friendship with Sophie.

Similarly, over the course of the story, 8-year old Sophie develops a great friendship with the BFG. She uses her resourcefulness to appear at the Queens windowsill to beg for help. Her welfare for others is evident in her explanations to the Queen about the actions of the evil child-eating giants. She is child-like because she is a child, and her kindness is demonstrated in her interactions with the BFG and others throughout the story.

The final character trait shared by both the BFG and Sophie is their sense of justice. Both of these characters are glad to the see the evil giants get the punishment they deserve—living in a pit from which they cannot escape and eating snozzcumbers until the day they die. As such, there are other secondary and minor characters that play a supporting role in the story, including the Queen of England, the military, and the evil giants.

SettingThe story takes place in 1982, mostly in England, as well as in the fictional nation of Giant Country. Sometimes, the main characters momentarily are in other countries on Earth. In England, the main locations for the novel are Sophies bedroom, the English Countryside, and the Queens Palace. There are, however, no specific dates or times of the year mentioned.

MoodThe mood is one of fear at the beginning because we do not know what the BFG (Big Friendly Giant) will do with Sophie when he kidnaps her. However, humour quickly takes over in the story, through the description of the BFG, his mannerisms, and his poor language skills. The humourous mood is continued as the reader further finds out that the BFG is friendly and only wants the best for Sophie, other earth children, and the world. There is also a sense of adventure as they travel across the world with Sophie and BFG.

PlotOne night, when Sophie cannot sleep, she looks out of the window of her dormitory. She sees a giant blowing something into her bedroom window. The giant sees her, and although she tries to hide in her bed, he reaches through the window and carries Sophie away. Luckily, she has been kidnapped by the world’s only good giant, the Big Friendly Giant (or BFG). Operating in the strictest secrecy, the BFG catches dreams (which appear as floating blobs in Dream Country). At night, he blows his bottled dreams into the bedrooms of children.

On the other hand, the other giants are not so pleasant, and go out into the world to steal and eat children. There is little else for them to eat where they live. For example, the BFG, because he refuses to eat people, must survive on a disgusting vegetable known as a snozzcumber. Fortunately, he is also able to make a delicious drink called frobscottle, which is fizzy and much more pleasant than snozzcumbers. Another interesting thing about it is that the bubbles in the drink travel downwards, causing breaking wind instead of belching, which is known as a Whizzpopper.

Sophie and the BFG become friends, and Sophie persuades the BFG that something has to be done about the evil giants eating the worlds children. Together they develop a plan to get the Queen of England to help them. The BFG mixes a dream which will show the Queen what the giants do; when complete, it is the worst nightmare he has ever encountered. They set off for Buckingham Palace and blow the dream into the Queen’s bedroom. The BFG then leaves Sophie on the Queen’s windowsill and retreats into the palace gardens.

When the Queen awakens, Sophie tells her that all her dream was true. Since the dream included the knowledge that Sophie would be there when she woke up, the Queen believes her, and speaks with the BFG. After considerable effort by the palace staff, the BFG is given a lavish breakfast, and the Queen begins work on eliminating the evil giants. A huge fleet of helicopters follows the BFG to the giants’ homeland. While the child-eating giants are asleep, the Army ties them up, hangs them under several helicopters each, and flies them to London Zoo, where a special large pit has been constructed from which they will not be able to escape. As punishment for their child-eating, the giants are forced to eat snozzcumbers for the rest of their lives.

ConflictSophie, the BFG, the Queen of England and her countrymen are trying to stop the evil 50-foot giants from kidnapping and eating children in England, and the rest of the world.

ThemeBesides stopping the giants from stealing children and eating them, the main theme is that we learn one should not judge others by how they appear or speak. Sophie initially saw the BFG as gross and frightening. His dialogue suggested that he was not intelligent. However, the reader finds that he is thoughtful, helpful, and very skilled in devising a plan (along with Sophie) to stop the evil giants and to trap them forever.

What I Liked About this Book and Why?I enjoyed the humour displayed in the book. The BFG speaks in an uneducated funny way. The names of the giants, certain food items (e.g. snozzcumbers), and places are laughable. The BFG and Sophie comment on passing gas (whizzpoppers), and the like. I was laughing so much that it was difficult to take breaks while reading.

I admired the friendship between the little orphan girl, Sophie, and the big-hearted giant. After they got over their differences and their initial suspicions, they worked well together towards the demise of the nine mean giants. I was delighted that Sophie and the BFG were able to stop the mean giants from eating children, with the help of the Queen of England. The heroes won in this novel and everybody is peaceful and happy at the end,with the capture of the nine monsters.

Who Would Like this Book and For What Age Is It Appropriate?People who would like this novel would be those who like stories about the fantasy world. The plot is not realistic and involves giant monsters. Many of the characters have magical powers, including having the ability to fly and to cast spells. The story is full of humour and laughable dialogue, so readers who want light comedy would enjoy The BFG. There is adventure for readers who like this since Sophie and the BFG go on many world-wide journeys and have fun.

Because of the fairly simple plot, its aspects of fantasy and imagination, and the level of vocabulary used, children between 7 and 12 would love this book. The book discusses the habits, dreams, and humour that are associated with kids belching, passing gas, thoughts of giants/monsters, and poor but funny speech. The story appeals to childrens sense of justice; evil is conquered. The main characters include a child named Sophie, with whom children can associate, and the BFG, who is the smallest of the giants, and the only kind-hearted one. These two characters battle the very large, mean adult giants, and they come out on top. It is truly a David and Goliath story!BibliographyDahl, R. (1982), “The BFG”, Farrar, Straus, and Giroux, USA. 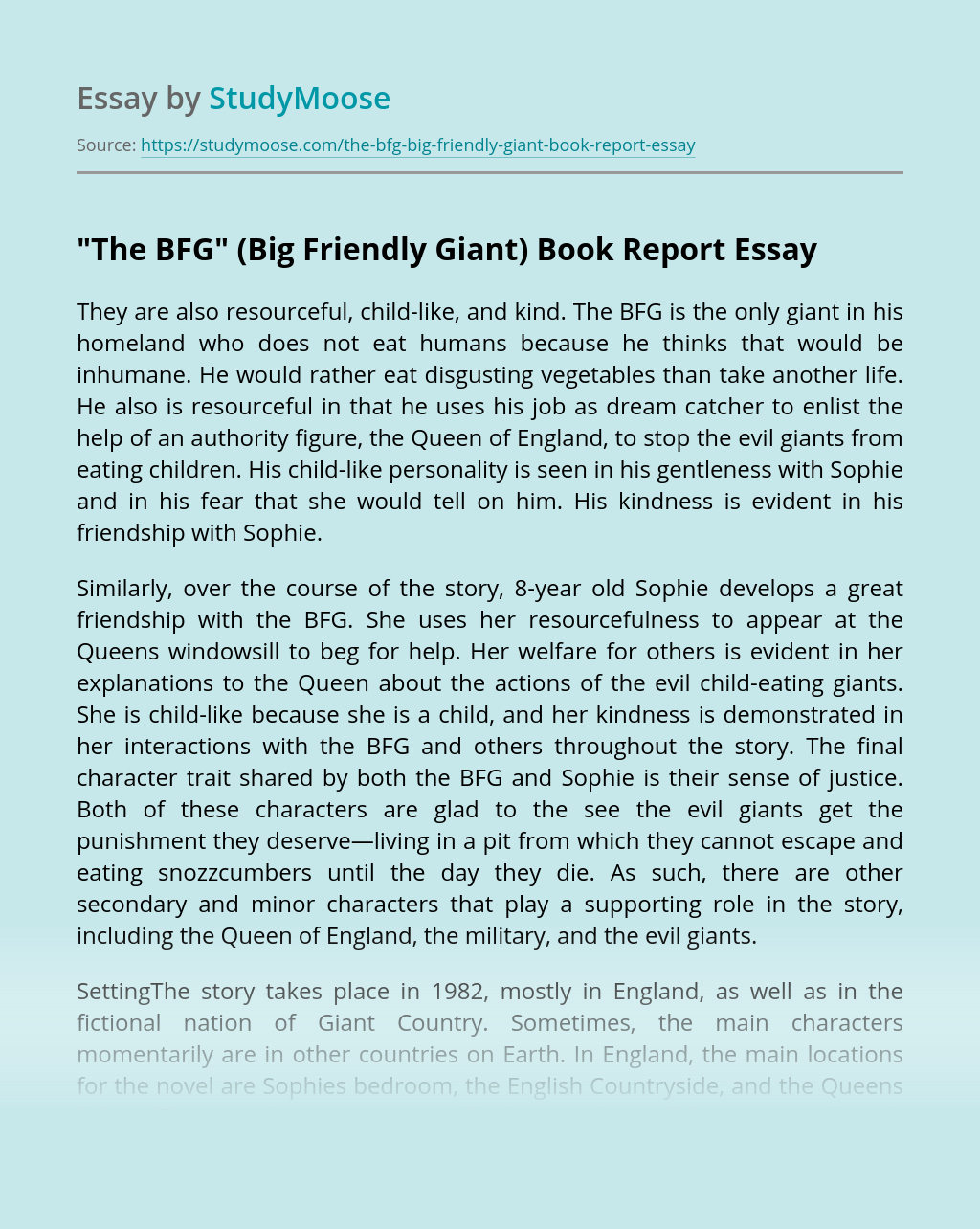