The Benefits of Democracy Essay

Democracy benefits the individual citizen the most. There are many characteristics of democracy however Freedom of speech, Equality before the law, and freedom of the press are the most beneficial elements. Without these rights and freedoms a democratic country might as well be called an authoritarian country.

Don't use plagiarized sources.
Get Your Custom Essay on The Benefits of Democracy Just from $13,9/Page

As a citizen in a democratic country and as a member of the media one can criticize the government and the president whereas in authoritarian countries it is an arrestable offense to criticize the law. Society often disagrees with government, rules/laws, and political issues. One of the best benefits is to be allowed express your thoughts on society through writing and videos without being punished for it.

All the people have the right to equal protection of the laws.

Freedom of speech is the most important of all to a well being democratic society. There is the ability to state your opinion in a non-respectful way in which the person will not be punished unless violent. Freedom of speech is not only communicated, radio, and television but are presented in novels, poems, films etc. In a democratic country, one can express their political and religious views through speech and won’t be arrested or harmed by the law. Protesting at government events are permitted as long as one is not verbally or physically violent. One may talk openly on the government officials without being arrested for their negative or positive thoughts.

Even though there are many complications through rights and responsibilities, of the two systems studied , it is evident that democracy benefits the individual citizen the most. Equality before the law, freedom of press and freedom of speech in order to express your thoughts and beliefs and be a part of the society and are an essential.

The Benefits of Democracy. (2016, Sep 21). Retrieved from https://studymoose.com/the-benefits-of-democracy-essay 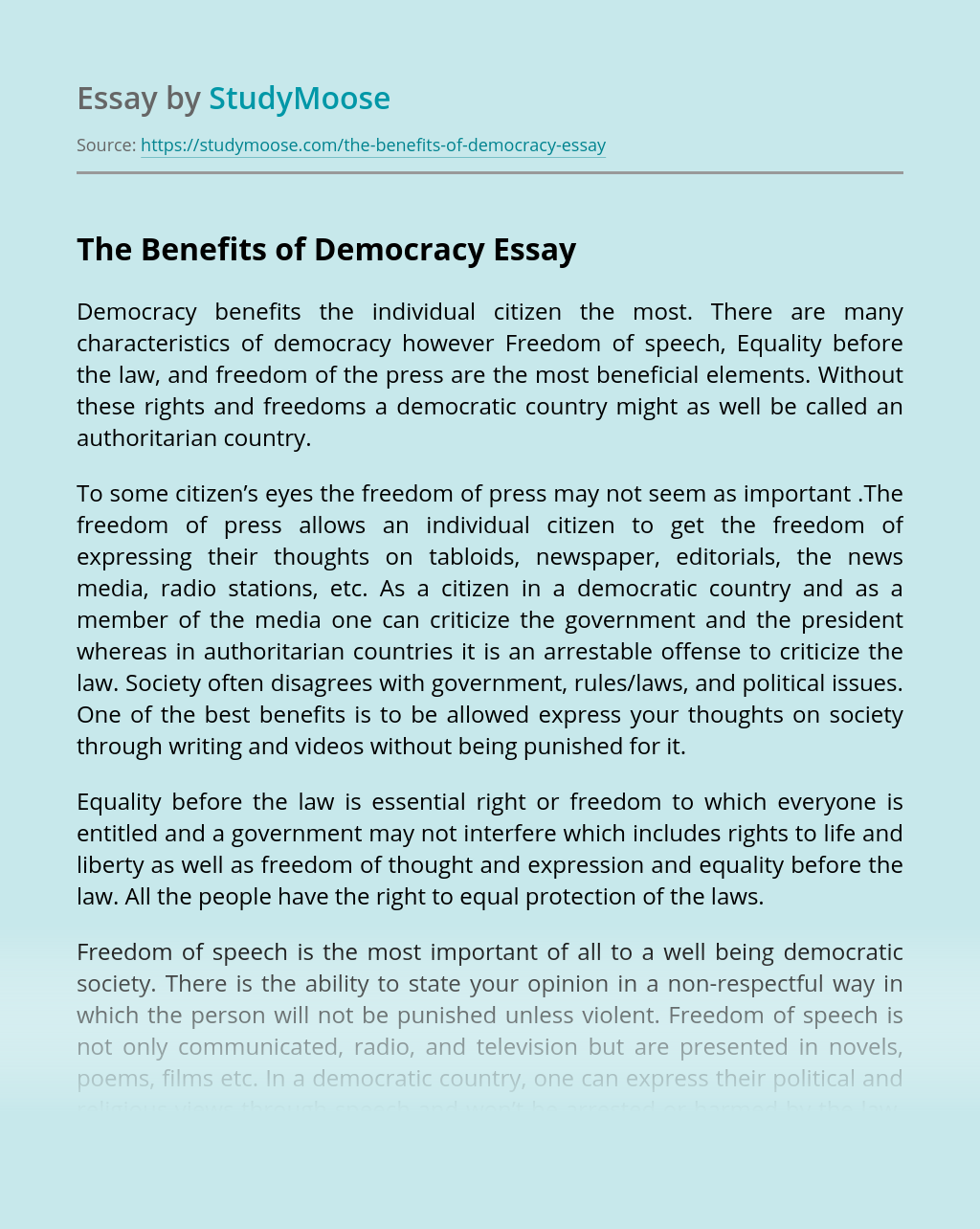 For more than a decade now, many Filipinos have trekked to EDSA to commemorate the anniversary of the February 1986 “People Power Revolution,” marking the overthrow of President Marcos’ regime. This year the customary rituals – ecumenical invocations, on-site masses, eloquent political speeches, martial marches, colorful parades, star-studded shows and other diversionary entertainment – will... VIEW ESSAY

2013 has been embossed by recent incidents such as a Vegas shooting that ended the lives of three people, four gruesome murders in Orange County in California, and many more tragedies. It is estimated that there are 300 million guns in personal hands in the US today, many legally owned and others not (Neyfakh). Every... VIEW ESSAY

View sample
Get Essay
Equality of conditions according to Tocqueville?

In his Democracy in America, Toqueville states that equality of conditions “exercising domination over civil society as much as over the government it creates opinions, gives birth to feelings, suggests customs, and modifies whatever it does not create.” (p. 9) Clearly, to understand Tocqueville, one must understand what he means by equality of conditions. These... VIEW ESSAY

In the history of America, Thomas Jefferson, the Secretary of State, and Hamilton, the Secretary of the Treasury, were two of the greatest leaders of our country. Although they both lead the country, that’s where the similarities end as they had opposing views on everything. Jefferson was a republican while Hamilton was a federalist. Jefferson... VIEW ESSAY