The Behaviour of Consumer Expenditure in Economics

The behaviour of consumer expenditure is probably one of the easiest macroeconomic variables to understand because its determinants are relatively well known. Assess the merits of this statement using data available to you from statistical sources and in particular the Economic Trends Annual Supplement. Also, assess the extent to which it is possible to investigate patterns of consumer expenditure across the regions of the United Kingdom (you may wish to consult Regional Trends). Why is it important that property analysts have a good understanding as to what is happening to consumer expenditure in the United Kingdom when they offer advice to clients?

Consumer expenditure is the largest element in total expenditure and so any fluctuations in consumption will have important implications for the overall level of economy in the economy.

Don't use plagiarized sources. Get your custom essay on
“ The Behaviour of Consumer Expenditure in Economics ”
Get custom paper
NEW! smart matching with writer

Consumer expenditure shows the cost of day-to-day living, which takes up the majority of income. However, day-to-day living varies in different households, with the amount of commodities such as food and recreation varying.

In the 1950s and 1960s, due to the development of new theories and the relative economic stability, economists believed that consumer spending was one of the best-understood and best-forecast variables in economics.

However, this was deemed to be not true when in the early 1970s and late 1970s there was a fall in the proportion of personal disposable income consumed which was not predicted in the existing equations.

The Keynesian consumption function C=co + bY , thus Keynes argued that ‘The fundamental psychological law….is that men are disposed, as a rule and on the average, to increase their consumption as their income increases, but not by as much as the increase in their income.’ It was also thought that a higher absolute level of income would widen the gap between consumption and income which is reflected in the marginal propensity to consume being less than 1. As we can see on the attached graph, consumer expenditure and income are closely related, with a few discrepancies towards the end of the graph. However, to use this formula with a regression line, could lead to problems.

Deviations from the predicted values can look small but they are still substantial errors. The formula does produce negative errors (very large negative errors occurred from 1973 to 1976 and then from 1978-1982) as it does not take into account pessimism, or shocks such as the oil-price shocks and rising unemployment. Falling asset prices and the desire of consumers to pay off accumulated debt are also not taken into account. The formula can also produce positive shocks (large positive errors in the late 1980s and the late 1990s), so it does not take into account falling unemployment, inflated house prices, and rising incomes so consumers become more optimistic about the future. Therefore this is too much of a simplified model as consumers take into account their current income when deciding expenditure, but also their future expected income.

It is also assumed that consumers try to keep their consumption pattern smooth so when rapidly rising disposable income occurs, consumption will rise but not in proportion to the rise in income so formulas do not take into account caution. As we can see from the graph, consumer expenditure does not rise as rapidly as income and fluctuates less. However, there is a break in this pattern in the mid-to-late 1980s and the early 1980s due to financial deregulation and asset price inflation which encouraged consumer borrowing so consumption increased more than income. However, the recession of the early 1990s, along with the collapse of house prices and the accumulation of debt from the previous period, resulted in consumers cutting expenditure by more than income in an attempt to repay debt. Therefore, we can say that the model is insufficient to explain fully the short run changes in consumer expenditure.

On the whole, the consumer expenditure is a comprehensive coverage of goods and services purchased by those surveyed, and it excludes business expenditures. It does this by measuring the flow of consumer goods and services at the time of purchase and at the prices paid by the consumers. It also provides a detailed and flexible commodity analysis of expenditure. However, there are disadvantages as the records of spending kept by households show a higher rate of spending in the early part of the diary period which suggests that recording worsens as the survey progresses. Some people approached to take part refuse so there is bias in a sample, and due to people being approached in their homes due to a sampling frame (i.e. through the use of the telephone book) it means that the non-household population are excluded, such as the homeless, and people in institutions and prisons who all have consumer expenditure. Problems with the sampling procedure also include if people are on holiday and people underestimating items of their expenditure. If the sample is small, sampling fluctuations may obscure changes in the expenditure.

The failure to appreciate the strength of consumer demand in 1987 and 1988 was an important contributory factor to the subsequent deterioration in the inflation and balance of payments position that has posed such problems for the UK economy. The fall in consumer spending in the recession of the early 1990s has been much sharper than in either of the two recessions in 1974-77 and 1979-82. This change in consumption expenditure was unpredicted by the forecasters.

The Behaviour of Consumer Expenditure in Economics. (2020, Jun 01). Retrieved from https://studymoose.com/the-behaviour-of-consumer-expenditure-in-economics-essay 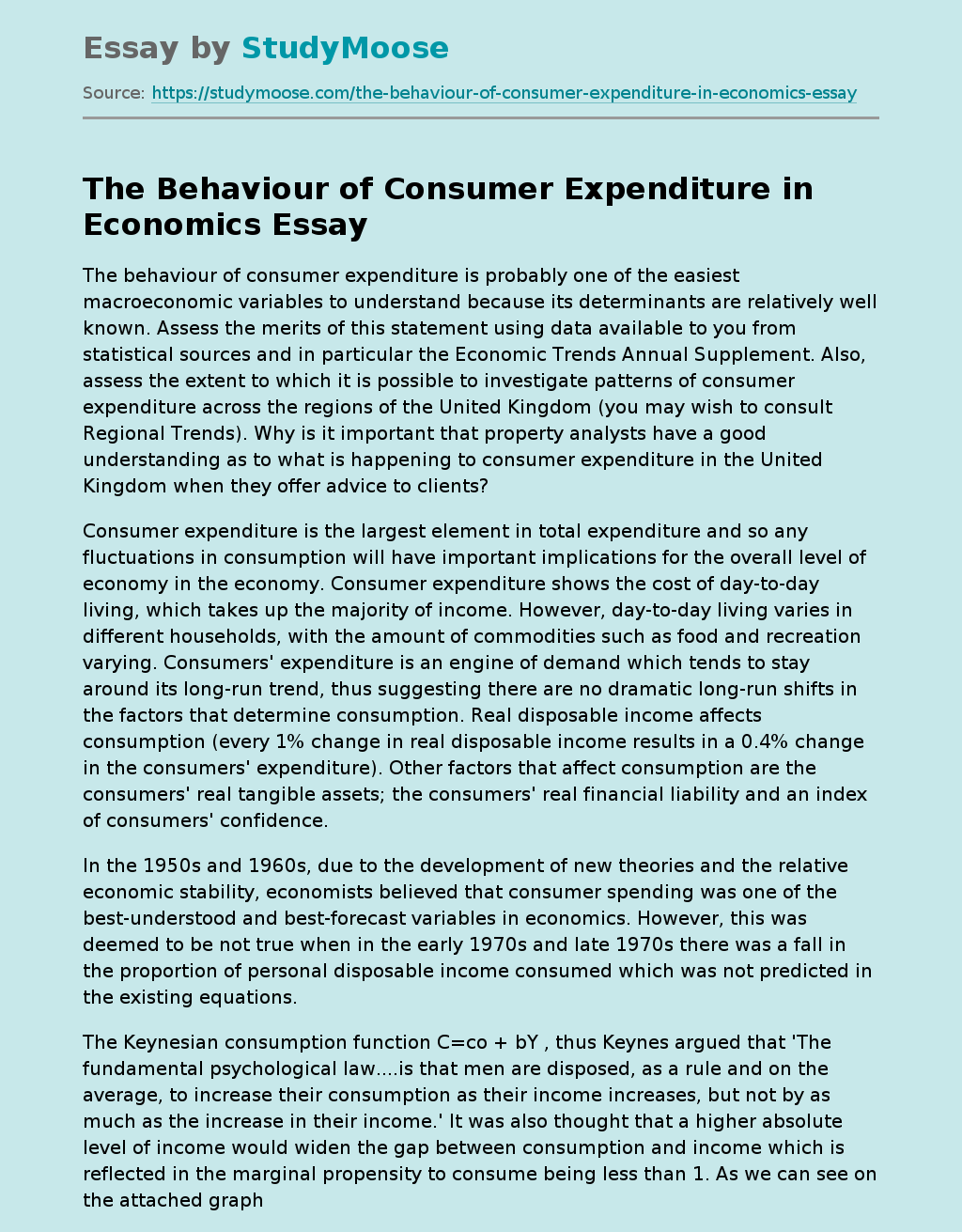