The Audacity Of Tattoos In The Workplace Communications

I cannot walk around Bronx Community College without seeing at least one person without a tattoo, and this is only counting the ones that are visible; there would be even more students who have tattoos that are not visible. However, the issues with tattoos are not a problem on campus but rather in the workplace, where employers feel the need to protect their companies’ image and reputation by firing or avoiding hiring those who have visible tattoos. I disagree that employers are justified in firing or not hiring employees who have visible tattoos because I think it is a violation to people’s right to have tattoos and display them if they want to.

Don't use plagiarized sources. Get your custom essay on
“ The Audacity Of Tattoos In The Workplace Communications ”
Get custom paper
NEW! smart matching with writer

Having visible tattoos does not make employees less eligible for work or less dignified to uphold a companies’ reputation.

The history of tattoos began 5000 years ago. However, in 1991 a 5000 year old tattooed male’s remains were found frozen in the mountains between Austria and Italy. The skin of the corpse had approximately 57 tattoos and based on the tattoos position it was believed that they were applied for therapeutic reason.

Tattoos have been used since ancient times (See Fig.1 & 2). Some people used it for religious reason and others for cultural reasons but for whatever reasons it was used it was widely practiced and its use was respected.

The issues of tattoos in the workplace threaten to violate people’s right for employment equality and the threat of being discriminated against. According to Steve Tufts, president of the United Firefighters of Los Angeles City, “We don’t allow discrimination based on skin color, yet we came up with a policy that discriminated against people with color on their skin” (qtd.

in Dorell 1). It’s unfortunate that discrimination is still part of our laws that seek for ways to influence public perception. The perception of people who have tattoos is that they are in gangs, unattractive, heavy drinkers, drug addicts or prostitutes. Nothing could be farther from the truth; surely there are some people who have tattoos that fit these descriptions, but we can’t generalized that everyone that has tattoos is a member of gang or a drug addict for that matter. The implication is absurd and what is more disturbing is that employers are using these stereotypes as guidelines when writing their dress code policies to prohibit tattoos in the workplace. While employers do have a legal right to develop a dress code policy they must be careful to enforce it equally, otherwise they run the risk of treading into discrimination if they are sued. In “Employers May Regulate Body Art on Their Employees” Sharon Bahadosingh writes,

The unequal application of employment policies is always a source of potential liability for employers. In Hub Folding Box Company, Inc. v. Massachusetts Commission Against Discrimination, Deborah Connor, a clerk at the Hub Folding Box Co., sued her employer for gender discrimination and retaliation. Although a male employee was not required to cover his Navy tattoo, Connor was told to cover a heart-shaped tattoo on her forearm or be terminated. The company was concerned that customers who saw Connor’s tattoo would have a negative reaction because a tattoo on a woman symbolized that she was either a prostitute, on drug, or from a broken home (3).

This is a classic example of discrimination in the workplace especially when it is a woman with tattoos. It is this inequality of reinforcing policies that specifically makes tattoo discrimination illegal.

According to Brian Miller, a professor of management at Texas State University “Body Art can lead to stereotyping, stigmatization and prejudices in the workplace” (qtd. in Harper 1). It is the perception that people have about tattoos that creates this climate of prejudice. In Mexico tattoos were originally thought as a symbol of courage. However, explorers thought of tattoos as a practice influenced by evil spirits. The explorers had never seen tattoos before; they did not understand its meaning, so they attributed to something evil. Even to this day, when society can’t understand a different behavior, it classifies it as out of character and deserving of ostracizing. In assessing both the historical aspect and today’s viewpoints, it’s not difficult to appreciate that many countries around the world play a significant role on creating a perception that tattoos are simply a form of self-expression or that it is reflection of maladaptive behavior. If the perception of tattoos is changed, perhaps tattoos would not be an issue in the workplace.

Some employees when faced with the dilemma of losing their jobs if they do not agree to cover up their tattoos, opt to use religion as an excuse for not covering their tattoos, this if challenged by employers can wind up in a law suit using religious discrimination. According to Ronald Kramer, Urban Lawyer,

Most courts apply a two-part frame work to analyze Title VII religious discrimination claims. First the employee must establish a prima facie case by demonstrative: 1) a bona fide religious belief, observance, or practice which conflicted with the employee’s job cuty [sic] 2) notice to the employer of the belief and conflict, and 3) that the religious practice was the basis for an adverse employment decision (2).

In this particular case the court found that the employee was able to prove sufficient evidence that he possessed a “bona fide” religious belief, and thus won the case of religious discrimination for the restaurant’s alleged failure to address the employee’s religious needs that justified the employee’s displaying of his or her tattoos. People who are persistent in their right to display their tattoos in the workplace will stop at nothing to preserve their job and their rights.

In conclusion, tattoos have been here since ancient times and they will continue to be here. Employers do have the right to choose based on qualifications if an employee is suitable or not, however, firing or not hiring only on the basis of visible tattoos, seems quite extreme, outrageously wrong and very primitive. Employers will have to invest for time to find ways to address the needs of employees who want to proudly display their tattoos while working productively and preserving company’s core values. This will save money on unnecessary law suits, promote equal opportunity employment in its true meaning and preserve the rights of all people as intended by the Human Rights Act.

Kramer, Ronald J.. “Recent Developments in Government Operations and Liability Generation Y: Tatoos, Piercings, and Other Is sues for the Private and Public Employer”. Urban Lawyer

The Audacity Of Tattoos In The Workplace Communications. (2019, Aug 19). Retrieved from https://studymoose.com/the-audacity-of-tattoos-in-the-workplace-communications-essay 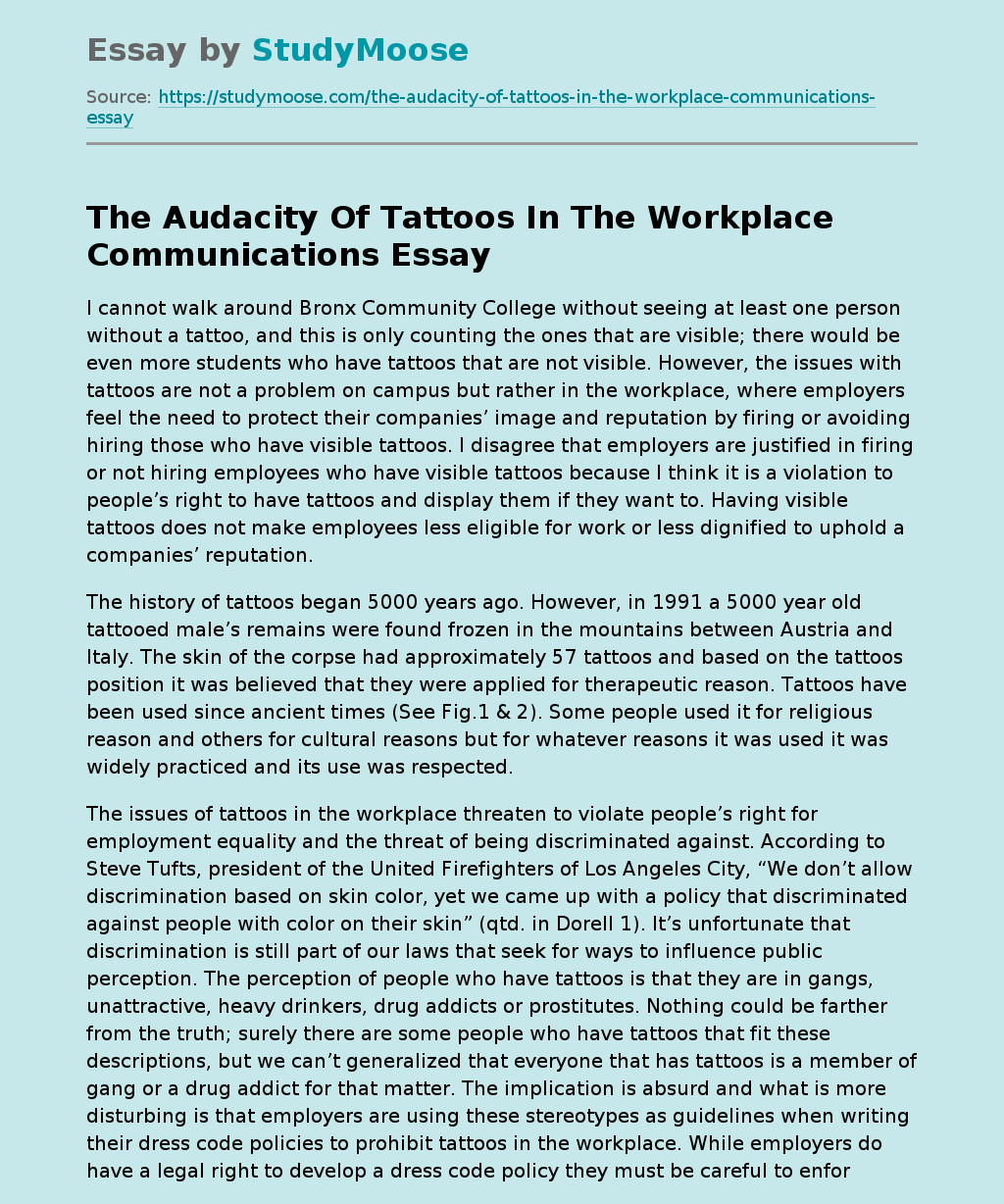