Archaeologists, scientists, and historians believe that mankind started in East Africa. However, civilization began in Egypt. Egypt is in North Africa and it shaped the rest of the world. Before the Trans-Atlantic slave trade, African Americans started as Kings and Queens of Africa. They had a structure of norms and beliefs system that united them as a society, and they ruled their own people. The continent called Africa consisted of several kingdoms, such as the kingdom of Ghana, Mali, and Songhay.

Don't use plagiarized sources. Get your custom essay on
“ The African American History: Africa before Transatlantic Enslavement ”
Get custom paper
NEW! smart matching with writer

The economic and agricultural system in Africa was simple but sophisticated. The soiled was tilled for farming, livestock was breed, and managed on the land. Africans were known for their iron-making skills and making other tools necessary for agricultural production.

The independence and self-sufficiency practiced in Africa resulted in a robust society.

The family system and social organization in medieval times in Africa were based on a kinship system, a single lineage, the interdependencies among people over their roles as individuals, thus each person felt closely linked by family ties to others. The society was an inclusive society; although women were considered as the lowest status with the least level of freedom, everyone was included men and women alike. The African people were able to express themselves through various activities such as dancing, creating music, and arts, especially in traditional festivals, religious observances, and communal gathering.

The arrival of the Portuguese and other White foreigners to Africa in the form of engaging in trades and religion destroyed the status quo of Africans in Africa. The trades which was supposed to be reciprocal between Africans and Europeans were characterized by deceits, marginalization and other anti-human behaviors. These resulted in brutalization, killings, and kidnapping of Africans in large numbers, forcing them into slavery and shipping them through the Pacific Ocean to Europe and America for hard labor. Many enslaved Africans who was captured into slavery and forced to journey through the Pacific Ocean, didn’t live long enough to record their stories of agony and pain, which they encounter during the horrific voyage.

On average, the enslaved Africans died within seven years of their captivation and not more than three of every four captured Africans lived to see the Americas. One-tenth perished in the process of capture or the march from the interior to the African coast; another 10-15 percent died during the ghastly middle passage. But stumbling ashore, they had to endure yet another horror: being sold as chattel to a European master and then transported to the place of their labor. From the seventeenth century on, slaves became the focus of trade between Europe and Africa. Europe’s conquest and colonization of North and South America and the Caribbean island from the fifteenth century onward created an insatiable demand for African laborers, who were deemed more fit to work in the tropical conditions of the New World. The numbers of slaves imported across the Atlantic Ocean steadily increased, from 5,000 slaves a year in the sixteenth century to over 100,000 slaves a year by the end of the eighteenth century.

Throughout the Atlantic Slave Trade, from 1520 to 1870, several millions of slaves had been shipped from Africa, 10,049,000 had arrived in the Americas. In the early eighteenth century, white people became highly dependent on black slaves. In the northern colonies, that dependence developed more slowly. But no matter where or how quickly slavery took root, this growing dependence redefined the meaning of race coupled with the evolving political circumstances that constantly kept Africans in perpetual bondage. In each territory, new rules were implemented to favor slave matters. Africans hoping to gain freedom after years of captivity were killed, raped, while those who were fortunate enough were sold by their masters into another territory. Most colonist especially the English colonists began considering lifelong servitude the natural condition of black people. They also believed it equally natural that slaves’ children should be born into perpetual slavery. With no freedom, they were forced to obey orders until a revolution appeared. It took the civil war for Africans in American to become partially free. Hence, it is important to critically argue that the nature of freedom assume by Africans during the era of slave trades was not necessary freedom, but lopsided or askew freedom which will be examined as it relates to contemporary society.

First, the reason African’s freedom during the colonial period was lopsided was because of the legal and political system, the system was designed against blacks. For example, in 1782, lawmakers in Virginia and Maryland repealed prohibitions of masters’ right to manumit, or free, their slaves. Another example is the law that ascribes children whose mothers were slaves were an accord that same status. Hence, one can argue that African’s freedom during this era was lopsided in all ramifications due to the laws that held them in perpetual hostage. Freedom according to Oxford dictionaries is the right to do or say what you want without anyone stopping you. Africans were never truly free from the hands of their colonial masters. Even in contemporary society, laws supporting the systematic profiling of blacks over their white counterparts still in existence today.

Secondly, the reason African’s freedom during the colonial period is askew is that the social system was constructed in a way that places white people or races as superior to blacks. For example, the constitutions enable the social system to create the gap between rhetoric and reality by preserving slavery. In contemporary political and economic society like today’s society, the racial order and political economy are deeply connected to our social system. A proper way to examine this is the uneven distribution of wealth or access to capital. The power to invest capital is largely held by the white economic elites. Furthermore, at the individual level, whites on average have ten to twelve times more personal wealth compared to African-Americans. Hence, the lack of freedom and inequality still exists in the present society.

Lastly, African’s freedom was never seen by white people as truly been free because of fear of reparation or retribution by blacks. For example, most patriot leaders refused to permit African-Americans, whether slave or free, to fight on the American side at all. Furthermore, an individual who is free in a society should be able to perform and engage in any activities they deem fit. At that time, the free slaves have limited right, many could not freely associate with others. Another example is the idea of putting weapons in the hands of African-Americans whether free or not, because of the notion that blacks will rebel against inequality.

In conclusion, the history of African-Americans in America can only be understood by looking at the Trans-Atlantic Slave Trade of 1520 – 1870. Before the coming of whites in Africa, African society was civilized and independent. They had a system of norms and beliefs that united and regulated their lives daily. Africans ruled their people. Equal rights and justice prevailed in the society. However, the unholy union started as a result of trade contacts with the white peoples. Several millions of Africans were killed, forced out of their homes, and kidnapped into slavery and transported through the Pacific Ocean to Europe and America. The freedom of Africans was ripped from them. The freedom which they pursue was never the same as the one they had prior to their contact with Whites. Hence, Africans and African-America witness and experience freedom as lopsided compared to the freedom of the White experience. 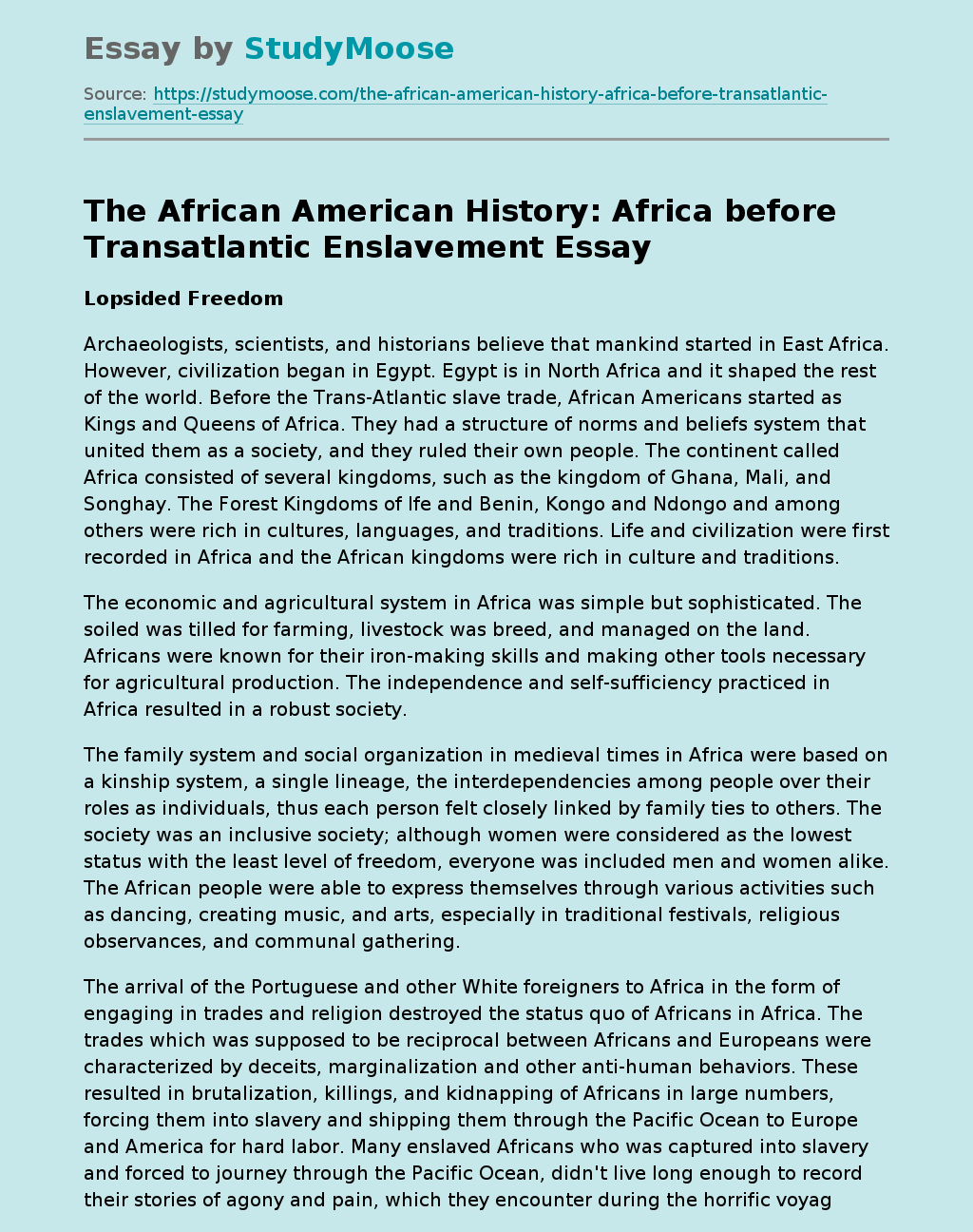