Tessie Hutchinson in "The Lottery"

Shirley Jackson’s “The Lottery” portrays a small town in which the citizens gather for a yearly lottery. The story begins on a beautiful summer afternoon. The town’s citizens are eager, gathering in the town square in order to take part in the yearly lottery by drawing slips of paper from a traditional black box. Everyone, including Mrs. Tessie Hutchinson, awaits this yearly tradition and most of them agree that this tradition should continue to be held in their small town.

Don't use plagiarized sources. Get your custom essay on
“ Tessie Hutchinson in “The Lottery” ”
Get custom paper
NEW! smart matching with writer

The lottery seems exciting; however, unlike a typical lottery the reader finds that toward the end of this short story it is not a lottery anyone in the small town wishes to win. The unlucky winner of the lottery, Tessie Hutchinson, is a character of tardiness or procrastination, anxiety, whining and annoyance; however, she never questions the reasoning behind the lottery, only why it is her that has to die.

From the very beginning of this story, the author curiously builds up the character of Tessie Hutchinson so that she seems to deserve her cruel execution.

Of all the villagers, Tessie shows up late, dressed in her apron, proclaiming that she’d forgotten what day it was. Even before the lottery begins, she is already guilty of tardiness and deserves punishment just like a student disrupting a class in school. It is ironic that one could truly forget something that is so awful. After reading the story and knowing the outcome, I wonder if Tessie was dreading this day all along.

When Tessie was in no danger she was gossiping with the other ladies and even encouraged her husband to go and pick a piece of paper.

When Hutchinson’s name is called out to come draw a slip of paper, Tessie hurried her husband by telling him to get up there. This conduct makes her seem to be anxious about the drawing, but confident that their slip of paper won’t have the dreaded black dot on it. Her anxiety and excitement makes the reader believe that drawing the marked lottery ticket is good, such as the case of winning lottery tickets in this day and age. We’re clueless that the drawing of the black dot will bring about an evil execution.

Later, Tessie’s attitude towards the lottery’s development makes her whiny and annoying to the reader as well as to her fellow villagers. When she discovers that her husband drew the paper with the black dot, “Suddenly, Tessie Hutchinson shouted to Mr. Summers, `you didn’t give him time enough to take any paper he wanted. I saw you. It wasn’t fair!'” She whined and complained that her husband, Mr. Hutchinson, should be able to draw again. Tessie even tried to plead for a re-draw, saying that her daughters weren’t included in the drawing. She knew that they belonged to their husband’s family, but she tried whining about it anyway.

When Tessie wins the lottery; she pleads for another chance and screams for mercy. She demands that her daughters take their chances as well, which is indicative of regression toward our basic instinct of survival. She did not seem to be upset that she would soon lose her life, but she demands that the drawing was unfair. Mrs. Hutchinson seemed to be a well-liked person in her town, although her kindness was overlooked when she began to complain and protest the method of the lottery drawing. Her good friend, Mrs. Delacroix, was one of the first in the crowd to say, “Be a good sport, Tessie.” Other characters in the story also make comments concerning Tessie’s complaints and annoying cries.

One can’t help but feel sorry for poor Tessie, who sadly lost her life due to the cruel and unusual death by stoning at the hands of her fellow townsmen. They did all this for the sake that it may bring a fruitful crop for the coming harvest season. Surprisingly, even Tessie’s closest friends were among the crowd who stoned her to death. Mrs. Delacroix, the friend Tessie first spoke to when she finally arrived at the town square, was mentioned as finding the largest stone ~ one that she could barely pick up. Mrs. Tessie Hutchinson was tardy to the biggest event of the year. She desperately hoped that her family would not win the lottery, yet her whining and complaining annoyed everyone and tends to make the reader feel that she deserves the death that she was awarded, although no one should have to suffer such cruelty.

Tessie Hutchinson in "The Lottery". (2016, Jun 26). Retrieved from https://studymoose.com/tessie-hutchinson-in-the-lottery-essay 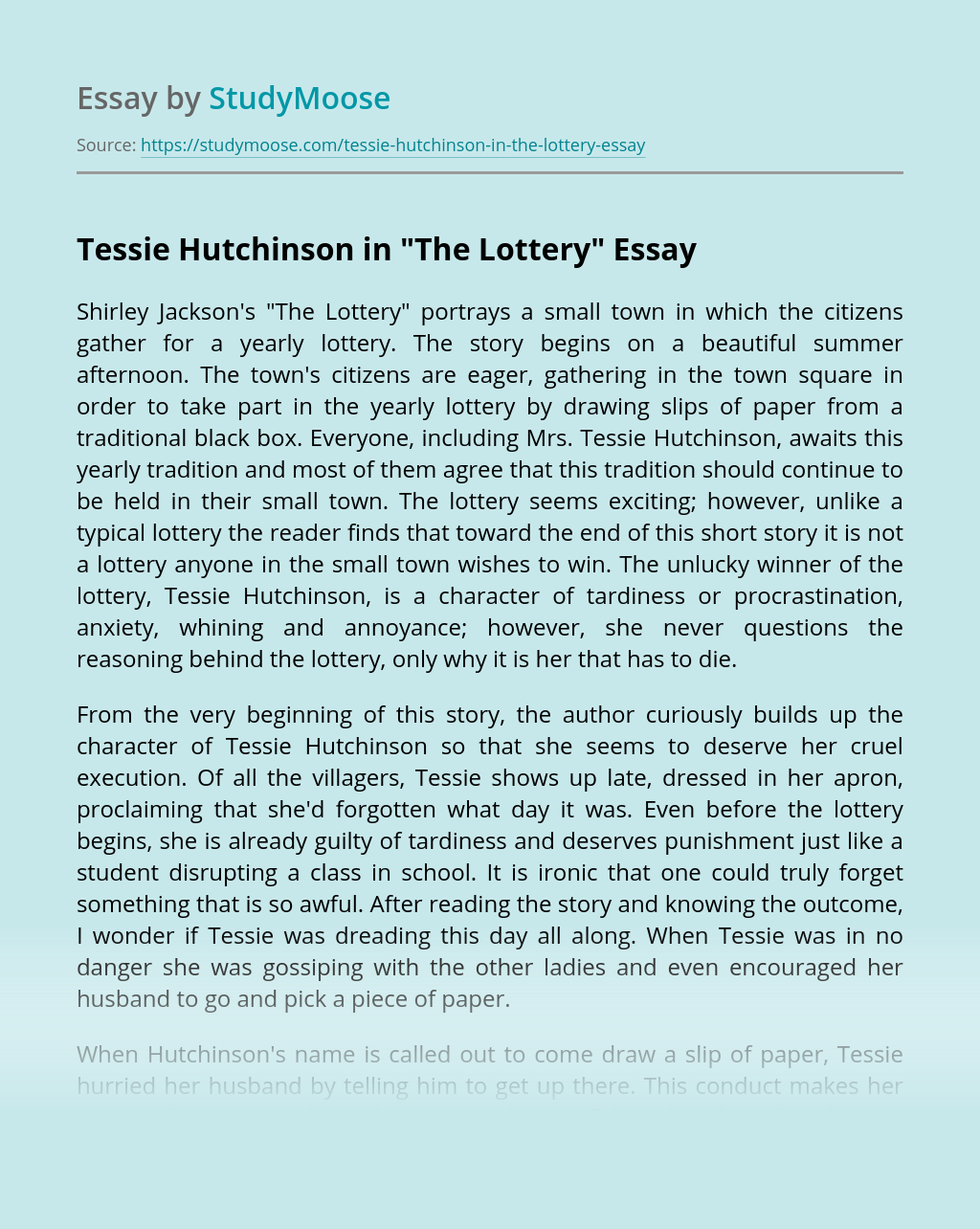