Yes, I do think that teenagers lacking the ability to socialize face-to-face is a problem. Just the fact that experts, people who have intense experience through practice and education in this particular field, claim that because of our reliance on technology we have built problems with our face-to-face social skills is an indication that this is indeed a problem. From my individual point of view, meeting people in person should be preferable to everyone, so we can prevent our generation from continuing to have a huge reliance on technology, which causes the lack of face-to-face communication teens have.

Don't use plagiarized sources. Get your custom essay on
“ Teenager’s lack on face-to-face communication ”
Get custom paper
NEW! smart matching with writer

I am aware that there are some people who disagree with my opinion. In their view, not meeting people face-to-face and relying on technology as a primary form of communication is not a problem. They say that because some teens are not speaking to their peers face-to-face, they have clearer thinking than others. By having clearer thinking, you’re not influenced by dozens of other people’s voices prattling on about their opinions and feelings.

They also state that by lacking face-to-face social skills, you have less stress.

They utter that since you’re not speaking to people in person, you are not interfering into their everyday lives, which excludes you from the drama and problems they have, making it easier and more peaceful in your life. These people will also input that face-to-face communication doesn’t allow a person to communicate over vast areas and broad groups of people. I can see and understand why some people view on these reasons because they all make sense at first.

But, once you look carefully into these explanations, it is revealed that these arguments about lacking the ability to socialize face-to-face not being a problem, are not so accurate.

Let’s examine, for instance, that missing the capacity to socialize in person makes you a clearer thinker. I’m not saying this isn’t true because I don’t disagree with this aspect, but I do, however, think that not having other people there to give their opinions or thoughts on any decision or idea you have can be a problem. I say this because what if you had a bad suggestion?

For example, what if you thought that you should start to smoke to have less stress, but you were unsure of doing it. Asking someone about it can help and they may help and lead you to make the right decision, which is to not smoke. Other people’s opinions and thoughts do matter in some situations, which is why you should try to talk to someone face-to-face, so they can help. However, the argument about having less stress due to not socializing face-to-face is completely invalid. Just because someone doesn’t interfere with someone’s life in person it doesn’t mean they can’t do it through other ways, for instance the internet. Most of the drama that teenagers encounter today is due to social networks.

Teens have a way of making other teen’s business, their business and well most people don’t like it when other people opinion or comment on their life and that’s where the drama and problems come from. This is all generally caused from social networks, such as Facebook. Also, teenagers are usually stressed about what they’re expected from at school and at home. In both situations, they’re expected to have good behavior, good grades, and well respect, which appears to be hard for some teenagers today.

With that argument resolved, I would now like to talk about the reason of face-to-face communication not being important because it is allowing a person to communicate over vast areas and broad groups of people. I can see how this is effective to our society today because now people can have a conversation with someone who lives miles away from them.

However, we rely too much on this resource. We tend to use media, such as social networks, to communicate with people not only around the world, but with people who we can communicate face-to-face with. This is causing us to become lazy, which can cause us problems with our health. For example, if you use a cell phone to communicate with someone who you can contact in person, you are not going out and leaving your house. You’re just staying home all day, lying down, eating, and watching television.

This causes you to become over weigh and other health issues. This also explains why a majority of Americans, now a day, are over weigh, which is all due to the use and advantage of technology. Also, because teens are now texting their peers to communicate with them instead of actually speaking to them, they are shortening their grammar because they get too lazy to type out the whole word out and it makes them look ‘cool’. For instance, they type the word “you” as the letter “u” and they turn the letter “to” into the number “2”.

This just shows that just because you can communicate with people around the world, it doesn’t mean it’s always benefiting you. Having everything in mind, I will now like to state my individual view on why I believe that teenagers lacking the ability to socialize face-to-face is a problem.

Teenager's lack on face-to-face communication. (2016, May 24). Retrieved from https://studymoose.com/teenagers-lack-on-face-to-face-communication-essay 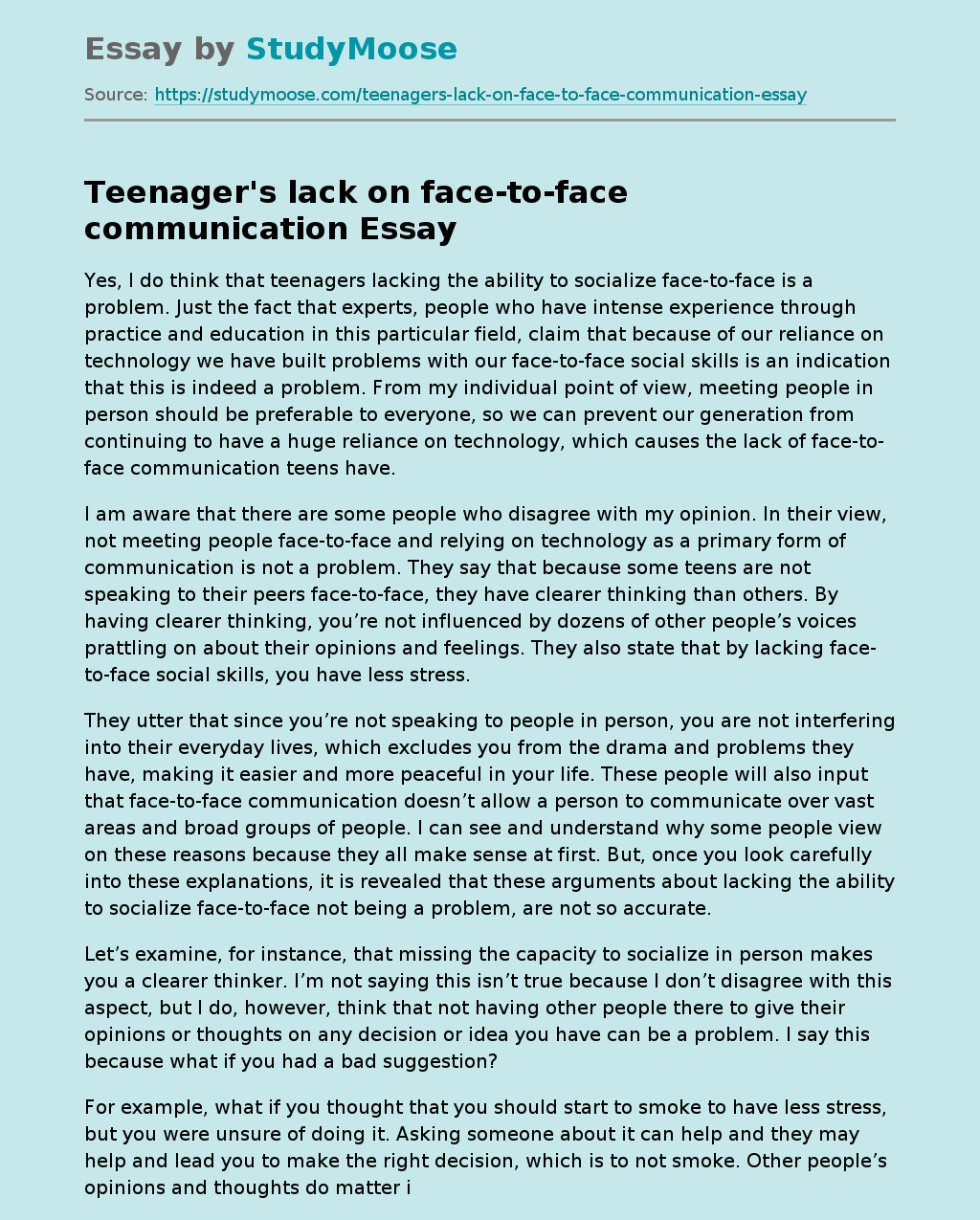