Technology Has Its Pros And Cons

Don't use plagiarized sources. Get your custom essay on
“ Technology Has Its Pros And Cons ”
Get custom paper
NEW! smart matching with writer

With Edison’s invention of affordable light bulb people began to have electricity in their homes, as time progressed it became a necessity for life to have electricity in many cultures. This new technology seemed to dictate how we should and need to live, but is that true? Businesses have been the main proprietor and investor of innovation and technological advancement.

The acceptance of a product from the public is what dictates its advancement and innovation, it is society choosing what should thrive or fail. If we examine Edison’s light bulb, we can see that it was society that made it come to fruition. Edison could not have made the affordable light bulb without the help of society, with investments and cooperation with various companies. It also would have not been successful unless people accepted this new lifestyle into their homes.

Just as cellphones have evolved from public to house phones and from car to mobile phones, these things once seen as unneeded by society have become main staples as people accept them. The opposite can be seen with other products such as Betamax Videocassette Player. Betamax was a high quality and innovative item of the time, being higher quality than VHS, but it failed. Society accepted VHS and not Betamax choosing one to thrive and the other to fail. In recent years we have entered the so called “push and pull” of technology and society. Cell phones are a prime example of this push and pull and how it effects society today.

Cell Phones are a technology that has many societies made it perceived as a need and with infrastructure, businesses, and social life made it a necessity for many people’s daily lives. Technology has formed a society reliant on it, but it was society which allowed it to grow and come to fruition. You can argue that technology has come to rule society, but it was society that more than likely put it there and allowed it to, in the first place Technology allowed use to experience many things at, relatively, our own discretion. Cellphones opened use up to new and mobile possibilities and it’s up to use how to use them. We can sit in a corner and get connected to the world, with information at our fingertips nothing is too far away. People can argue that technology has made us lethargic, but it can also make us active, with exercise applications and various other technologies; it all depends how and if you utilize them.

Technology has its pros and cons; it definitely has good and bad effects on society, but when we speak of the impact of technology on society as a whole, we and even I only speak about the positive effects and tend to rule out and overlook the negative aspects and effects of technology. Think of the days when there were no computers or televisions, when all modern technology didn’t exist; society and life was utterly different. People depended on themselves and used all their common knowledge; people lived a simple, but efficient life. Not all technologies or innovations have had a positive impact on us. Technology negatively affects us by perpetuating the mindset of immediate satisfaction.

The creation of various portable technological devices has slowly ingrained the idea of instant gratification. Cell Phones let us keep in touch at all times virtually anywhere, it has created a mindset of instant gratification and that whenever we want pleasure it should be put immediately in from of us. Technology has had both benefits and drawbacks over the course of the last few centuries and the way it is being viewed, from a social aspect, has also changed. Whether society dictates technology or vice versa, I believe it is a cyclical process that originates with society. I cannot live without technology and I believe the benefits of it out way the drawbacks.

Technology Has Its Pros And Cons. (2016, May 30). Retrieved from https://studymoose.com/technology-has-its-pros-and-cons-essay 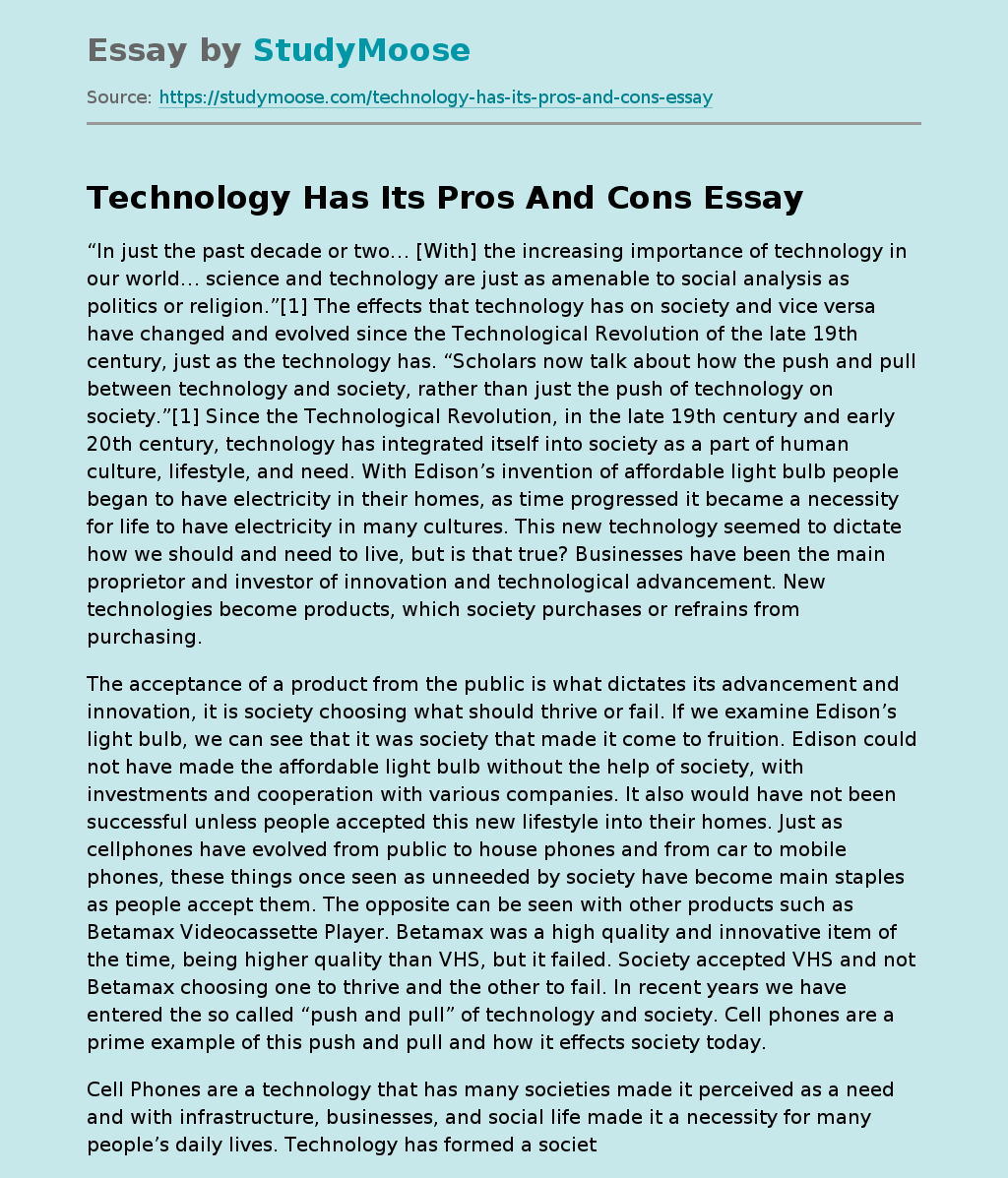