This report will examine how changes in technology are affected by society, in turn, how the society that produced this technology is impacted by this creation. The paper will specifically address the impact of personal computers, cell phones, and the internet on society, and how these technological advancements relate to the three major sociological perspectives; equilibrium model, digital divide, and cultural lag. The excessive use of computers has drastically changed the lives of many users. As a multifaceted tool, the computer is used for tasks to include research, homework, business related activities, and even communicating with distant friends and family.

Don't use plagiarized sources. Get your custom essay on
“ Technology and Social Change ”
Get custom paper
NEW! smart matching with writer

Although computers can serve many useful purposes, they can become a reason for procrastination as well as cause people to retract from “real life” social activity. “As changes occur in technology, we must also contemplate the effect these changes will have on individuals. We must realize that individuals are vulnerable to the virtual world and that they can get lost,” (Computers and Their Impact, California State University Northridge, n.

Personal computer and smartphone usage is also tied to how the Internet has impacted current sociological issues. As previously mentioned, the Internet is quite engaging, so some people tend to spend several hours browsing Web sites, blogging, Facebooking, Instagraming, etc. This causes users to disengage from organic reality and embrace virtual reality. We are becoming a socially inept society. “The use of texting and Facebook and Twitter and other sites as a form of communication is eroding people’s ability to write sentences that communicate real meaning and inhibit the art of dialogue,” Saunders Medlock says.

“It also allows people to communicate without ever seeing each other or hearing a voice, and this has a huge impact in that much communication is done nonverbally or in inflection and tone of voice.

We will have a generation that has no clue how to read any of these cues.” (Mobile Phones Changing Interpersonal Communication, 2015) It seems that Internet usage on both personal computers and smartphones has become more of an addiction than a leisurely pastime or hobby. “With the increase in computer usage, many individuals are finding out that they are becoming more dependent on the computer. Individuals begin to find ‘virtual life’ more interesting than what is going on in their real lives,” (Computers and Their Impact, California State University Northridge, n.d.). It is also known that internet usage on cell/smart phones is a growing problem in the work force. Businesses are reporting that productivity and quality customer service is declining as a result of smartphone use. Cell phones in the workplace will cause disruptions such as talking loudly as well as loud ringtones, interrupting meetings, inappropriate, personal conversations, internet use, and gaming.

According to a survey conducted on 145 out of 260 Chesapeake Fire Department employees, 56% claimed “Cell phones frequently interrupt training, meetings, and face-to-face conversations, which most consider rude and inconsiderate,” (How does the use of cell phones impact the Chesapeake Fire Department?, Long, n.d.). According to Talcott Parsons equilibrium model; as changes occur in one part of society, adjustments must be made in other parts. If not, society’s equilibrium will be threatened and strains will occur. This functionalist perspective relates to this topic because it exposes the haves and the have-nots in this country, if not the world. It is known that people who have internet access have many sociological advantages. Meaning, many businesses only accept online resumes and applications; company’s accept online payments (this eliminates the need to pay postage fees), and Internet users have the ability to contact friends and loved ones from afar.

This causes an imbalance in the strain because not only are the have-nots neglected of certain sociological events; they are also geographically limited in relation to available employment, health services, and certain educational opportunities. This leads us to the conflict perspective. The conflict perspective concludes that change “has crucial significance, since it is needed to correct social injustices and inequalities,” (Conflict Perspective, Sociology: A Brief Introduction, 2015). As a result of rising computer, smartphone, and Internet usage, some feel the Internet should be regulated due to the term cultural lag. This term refers to the “period of maladjustment when the nonmaterial culture is still struggling to adapt to new material conditions.” In relation to the rapid growth of the Internet, the article continued by stating; “Its rapid, uncontrolled growth raises questions about whether to regulate it, and if so, how much,” (Economic and Cultural Factors, Ch. 16).

So, it seems that both the conflict perspective and cultural lag theory, digital divide relate to the impact of computer/Internet technology on society, because all three consider the social inequalities in relation to Internet users and nonusers. “The idea of the “digital divide” refers to the growing gap between the underprivileged members of society, especially the poor, rural, elderly, and handicapped portion of the population who do not have access to computers or the internet; and the wealthy, middle-class, and young Americans living in urban and suburban areas who have access” (Defining the “Digital Divide”, Stanford University).

Although more racial groups are gaining in computer ownership; Blacks and Hispanics are still lagging “even further behind Whites in their levels of PC-ownership and on-line access,” (Persisting “digital divide”, National Telecommunications & Information Administration, 1998). Finally, the evolutionary theory proclaims that society is viewed as moving in a definite direction. “Early evolutionary theorists generally agreed that society was progressing inevitably toward a higher state,” (Schaefer, 2015). The Internet and its users are increasing in size at a rapid pace, so it is hopeful that more cultures and societies will embrace this technology in order to grow along with the increased demand for Internet technology.

It is apparent that technology, especially computer, smartphone, and Internet technology has impacted society both negatively and positively. The positives are that one can use this technology for research, homework, connecting with friends and family, apply for employment, and many other things. On the other hand, the negative impact of technology lower productivity in the workplace; creating a socially inept society, digital divide issues, and inequality due which cultures/social groups have access to PC’s and which ones do not. 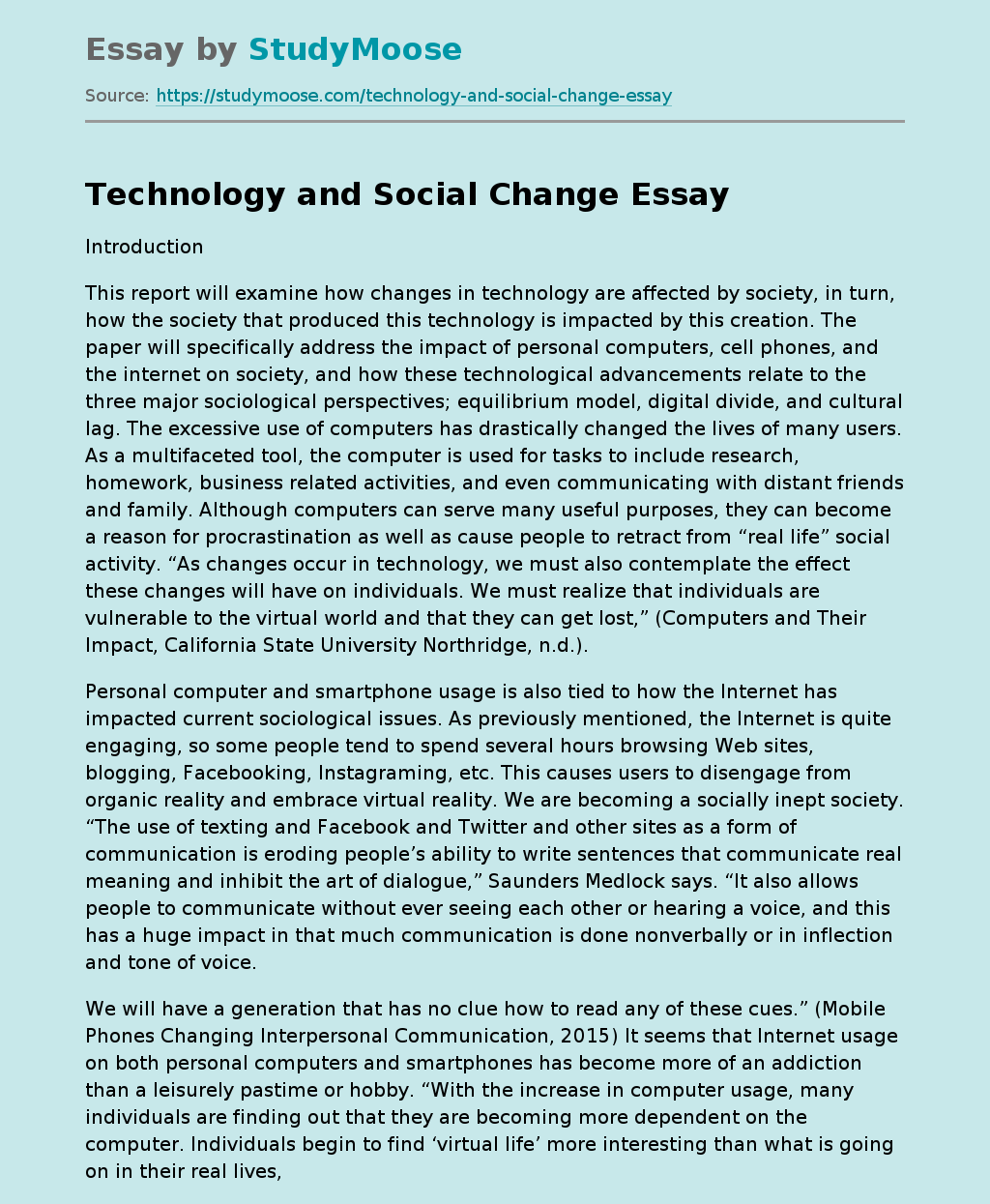