Symptoms and Treatment of Bipolar Disorder

Don't use plagiarized sources. Get your custom essay on
“ Symptoms and Treatment of Bipolar Disorder ”
Get custom paper
NEW! smart matching with writer

Nearly 2% of Americans have been diagnosed with bipolar disorder, more commonly known as manic depression. Scientists are constantly studying the possible causes of bipolar disorder. Most scientists agree that there is not one single cause, but is caused by a combination of biological and environmental factors.

Even though it has not been proven that bipolar disorder is hereditary, it does tend to run in families. Children with a parent or sibling who has bipolar disorder are much more likely to develop the illness, compared with children who do not have a family history.

Bipolar patients are more likely to use mind altering drugs to try and self-medicate therefore making diagnosis a harder process. “Doctors diagnose bipolar disorder using guidelines from the Diagnostic and Statistical Manual of Mental Disorders (DSM-IV). To be diagnosed with bipolar disorder, the symptoms must be a major change from your normal mood or behavior” (Youngstrom, E., 2012, October 23). Below is a chart demonstrating the different mood changes and behavioral changes between a manic and depressive episode.

It was once thought that there were only two types of bipolar disorder, but now the disease has been broken down even further into several different disorders. Bipolar I disorder is the most severe form of the illness with extreme manic or mixed episodes that last at least a week. “Bipolar I disorder is characterized by at least one manic episode during your lifetime. Usually there are depressive episodes as well that last two weeks, however you do not need to have a history of depression to be diagnosed with bipolar I disorder. Bipolar II disorder is defined by experiencing both a hypo-manic and a depressive episode. To meet the criteria for bipolar II, a previous episode of depression is necessary, along with symptoms of less intense mania lasting at least four days” (Caponigro, J., Lee, E., Johnson, S., & Kring, A., 2012). Cyclothymia is defined by a pattern of chronic and frequent mood changes. These mood changes are not as extreme as those experienced in manic episodes. The diagnosis is based off of how much of the time some type of changed move is present.

Most people diagnosed with Cyclothymia tend to feel very “up” or very “down” at least half of the time. This diagnosis is not considered until those mood fluctuations have continued for a very long time: generally one year for adolescents and over two years for adults. These episodes must last for at least two years without more than two months of a stable mood during that time to qualify for this diagnosis. Bipolar NOS or not otherwise specified is the diagnosis that covers forms of bipolar that don’t fall into any of the other categories. The mood episodes are extreme enough to be classified as manic, hypomanic, or depressive but do not meet the duration requirements for bipolar I, bipolar II, or cyclothymic diagnosis. Bipolar disorder cannot be cured, but it can be treated effectively long-term. Because it is a lifelong illness, long-term treatment is essential to control symptoms. It is essential to receive the correct diagnosis to receive the most effective treatment. Medication is the most effective treatment for managing symptoms of bipolar disorder and extending periods of mental and physical wellness.

Most often, the first medicines used are called mood stabilizers. “Since the early 1960’s, lithium has been the most commonly used mood stabilizer” (Fink, C., & Kraynak, J., 2013). Some other medications that are prescribed for the treatment of bipolar are Trileptal, Topamax, and Neurontin. Because it is believed by some that bipolar disorder is caused by a chemical imbalance in the brain, these medications have been effective in treating bipolar disorder, but they are not considered effective treatments for bipolar symptoms. Antipsychotics medications are used to reduce psychotic symptoms and lowering irritability, and they can be the fastest way to treat an acute manic episode. Antipsychotic medications are usually stated during an acute manic phase while the patient is in the hospital, and used as a maintenance treatment after the patient is released. The biggest hurdle in treatment of bipolar disorder is ongoing treatment. When patients are diagnosed correctly and started on the correct medications it is vital for those medications to be continued by the patient. Many bipolar patients feel that once their mood has stabilized that they are “cured” therefore they stop taking the medication.

In conclusion, receiving a bipolar diagnosis does not have to be the end of the world. Many brilliant and upstanding people have been diagnosed and effectively treated for bipolar disorder. It is important to have regular visits with a psychiatrists to discuss your medications and side effects. Blood tests are sometimes ordered to check the levels of your medications and the response of your body to these medications. It is important to stay on the prescribed medications and to try and keep a normal daily routine. A support group and supportive friends and family are vital in maintaining a good balance between the highs and lows. Even though there is not a cure, it is possible to live a happy and productive life.

Symptoms and Treatment of Bipolar Disorder. (2016, Mar 06). Retrieved from http://studymoose.com/symptoms-and-treatment-of-bipolar-disorder-essay 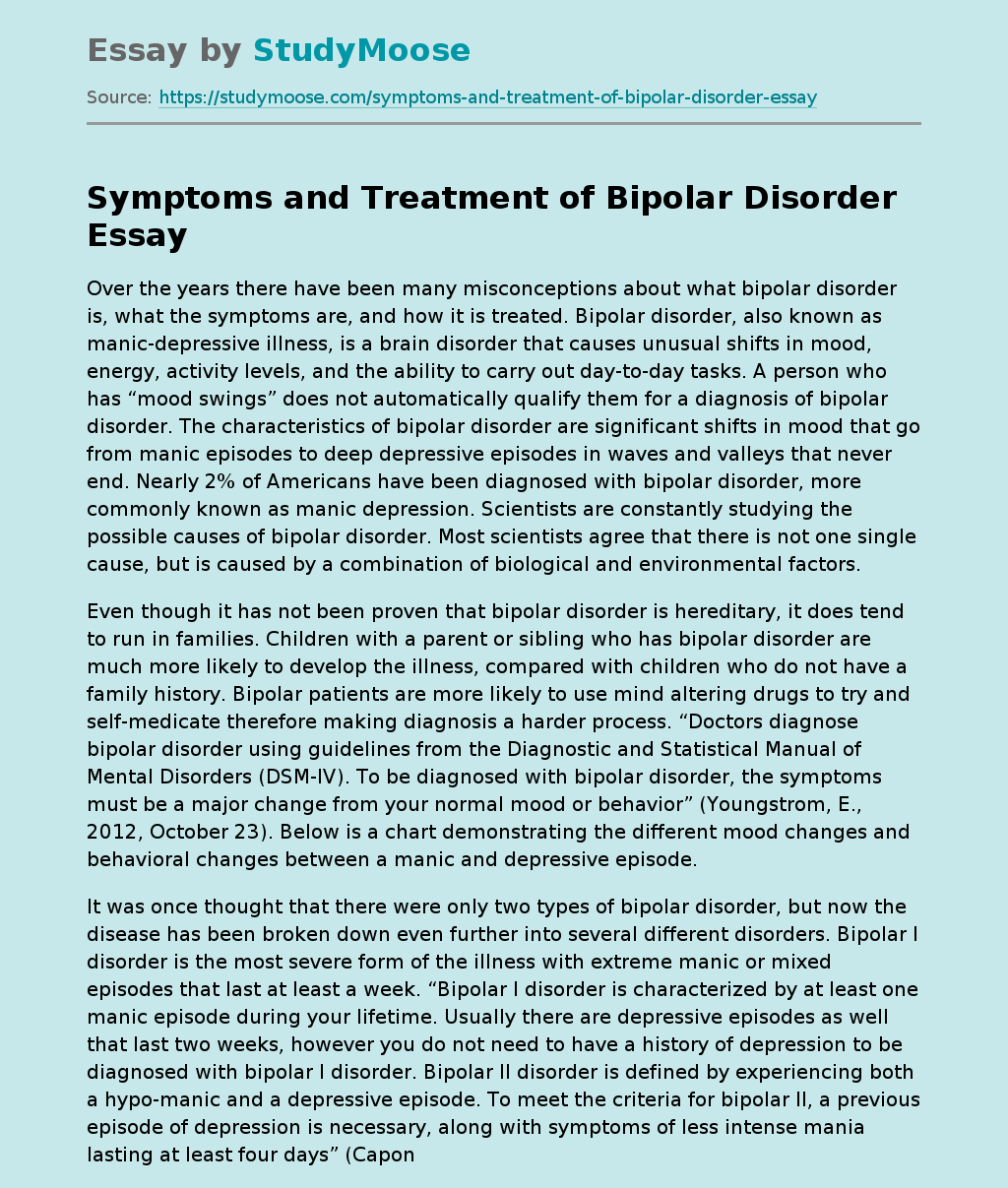