An Overview of the Signs and Symptoms Neurocognitive Disorders

Don't use plagiarized sources. Get your custom essay on
“ An Overview of the Signs and Symptoms Neurocognitive Disorders ”
Get custom paper
NEW! smart matching with writer

Neurocognitive disorders show decline in an individual’s intellectual abilities, which can be easily observed by others through use of various cognitive assessment methods.

A neurocognitive disorder is one of the critical disorders that have significant impact on an individual’s memory.

The focus of these disorders is very adverse and thus it does not create an enabling environment where there is easy consideration and effective analysis of the resources available. It creates a significant loss in an individual’s body. These losses include loss of performance as well as loss of all learned skills.

Therefore, the development of neurocognitive disorders depend heavily on the causes fronted.

These causes determine if the development will slower or faster with time. There are four major complication categories with neurocognitive disorder. These categories include cognitive dysfunction, seizures, behavioral problems and motor dysfunction. These disorders either can be genetic or acquired from the environment, trauma and heredity (D’Arms and Jacobson, 2014, p. 18).

Cognitive dysfunction is also known as brain fog which is the loss of cognitive reasoning abilities which make it very difficult for an individual to carry out his or her day to day activities since they can barely make a correct decision in relation to the context being considered.

Motor dysfunction is another category of neurocognitive disorder that refers to abnormal or impaired functioning of a muscle, nerve or center that have a significant effect on the ability ofan individual to move. This type of neurocognitive disorder, therefore, involves systematic consideration on how an individual loses the basic aspects through the inability to remember even the basic things.

The complications in the brain thus have significant impact thus influencing some of key muscle and nerves, which bring about this effect in patients who are having motor dysfunction. Therefore, in this case an individual lacks the ability to communicate with the required speed since there are significant differences in the way that they interact with others.These influences is in both written and oral information (D’Arms and Jacobson, 2014, p. 36). Symptoms and detectionNeurocognitive disorder includes both major and minor neurocognitive disorders.

Healthcare providers who high level of experience such as the healthcare providers who use the cognitive disabilities model and the Allen battery of cognitive assessment can easily identify and recognize a cognitive disorder or a memory impairment on an individual’s daily abilities and functions. Thus, these individuals are better placed to create an enabling environment where quality care can be provided as well as offering other significant support.

Another aspect that has been incorporated to fast track the detection of these neurocognitive disorders is the addition of criteria for mild neurocognitive disorder. Early detection of these disorders is very important as it helps in ensuring that the healthcare practitioners are able to provide the necessary medical assistance to curb the identified disorder before it spirals out of control.

This can also slow the progression of the associated diseases, ease patients suffering and improve the quality of life for all the stakeholders involved especially the patients and their loved ones (Kempler, 2012, p. 31). Neurocognitive disorders may manifest in one or two areas of individuals cognitive abilities although there are also significant chances that the impact of these disorders can be manifested in different places on an individual. The major area that is mostly impacted by neurocognitive disorder is the attention aspect.

An individual is unable to communicate fluently as well as focusing on the issues that are being raised within a particular context since it is very difficult for a patient suffering from the disorder to interact with others (Kempler, 2012, p. 51). Neurocognitive disorders begin with delirium, which reduces the ability of an individual to effectively concentrate on achieving a given set of targets. An individual’s mind is always off and disengaged.

These constitute of already developed disorders transforming into some common associated diseases such as Dementia, Alzheimer’s, mild cognitive impairment and memory loss. The loss of memory constitutes the worse condition of these disorders, which are very difficult to engage and create a lasting medical care without influencing an individual’s ability to fully recover (Flynn et.al, 2013, p.37).

Neurocognitive disorder testingIt is also known as neuropsychological testing is a very detailed evaluation process of an individual’s cognitive status but focusing on specific neurologic domain, which is subject offocus. These neurologic domains that may be significantly considered include memory, attention,and language, visuospatial, problem solving, and processing speed motor among others.

Therefore, neurocognitive testing involves different levels of assessment where a health care professional subjects an individual to perform certain tasks to in order to understand their brain functionality. The neurocognitive disorder is physically non-invasive action. During the testing process there are two significant assessment that are usually carried out which are cognitive disabilities model and the Allen battery of cognitive assessment (Flynn et.al, 2013, p. 46).

These assessments are mainly aiming at creating a better understanding of the ability ofthe brain to function properly. The brain is responsible for controlling specific neurologic domains and thus cognitive skills are adversely affected by different brain-related health conditions. Therefore in order to effectively outline the exact performance of the brain, it is important for healthcare providers to thoroughly asses an individual’s relationship among brain, thought, behavior and mood.

Thus neurocognitive testing is able to provide the correct picture regarding the position of an individual and if their exists any disorders that ought to be addressed before it is too late (In Greenfield and In Long, 2016, p. 53). Neurocognitive testing is very important especially in tracking process for patients undergoing convalescence in order to determine if a certain treatment method suits them.

Thetesting process involves many assessments, which are carried out to create the right picture about an individual’s condition. The assessment methodologies that are usually in place to provide significant information on an individual’s disability determination because of prolonged disorder presence in the human body (Flynn et.al, 2013, p. 54). Dealing with neurocognitive disorders there are different way in which neurocognitive disorders can be dealt with efficiently.

Testing is the only way neurocognitive disorders can be detected. There are situations where the symptoms may be evident although without seeking medical consideration it is difficult to understand if the symptoms are caused by neurocognitive disorders. Individuals are therefore advised to ensure regular evaluations regarding the whole process to detect any issues that maybe significant in brain functionality.

It is important for an individual to undergo evaluation in situations where any of these symptoms starts to develop. They include, Memory loss, Difficultycommunicating, Attention and concentration problems, Difficulty planning and organizing, Changes in spatial skills or visual perception, Difficulty reading or writing, Disturbed thinking orconfusion.

Increased impulsivity and Slowed thinking speed.The major treatment techniques that can be employed in treating neurocognitive disorders include use of remediation techniques, compensatory strategies and adaptive approaches.

A mental health expert thus develops the best mechanisms on how different neurocognitive can be undertaken. These health professionals that are mandated to deal with these issues include neuropsychologists, psychologist or occupational therapists. These professionals thus develop an effective treatment plan from the various treatment techniques, which are related to the type of neurocognitive disorder in place (In Greenfield and In Long, 2016, p. 67).

An Overview of the Signs and Symptoms Neurocognitive Disorders. (2021, Oct 05). Retrieved from https://studymoose.com/an-overview-of-the-signs-and-symptoms-neurocognitive-disorders-essay 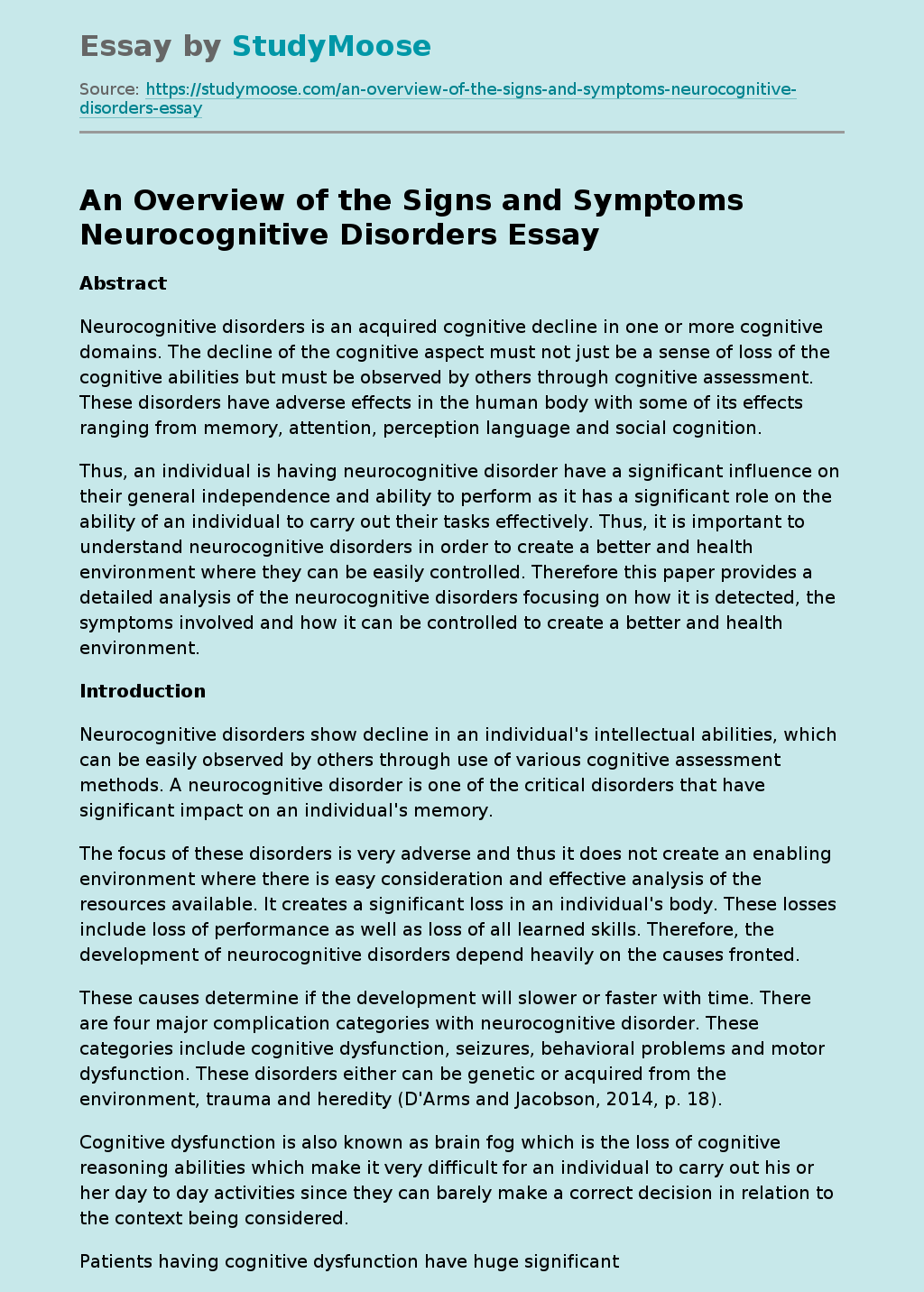