As Shelton (1988) said strategic fit exists when two companies are able to create value that would be created if they were trying to reach the same goals separately. The IT industry is extremely competitive and companies are always searching for new ideas and new ways to evolve to be constantly one step ahead of its competitors. It also has players that are known all around the world for the quality of their products. Oracle started then to, over the years, acquire smaller companies, either to continue the development of their core business (database systems) or to be able to enter into new areas that would complement their current offer.

On that target screening they found Sun Microsystems. Being already dominant in the software area, Oracle saw the perfect opportunity to expand and enter in the hardware and networking space that already were Sun´s areas of expertise.

With this deal Oracle would be able to expand their brand and their clients and, at the same time, acquire new platforms to their portfolio such as Java, MySQL and Solaris.

Oracle’s levered the company’s value with the acquisition of Sun through complementing their software with hardware manufacturing and by doing so they were able to cut production costs, thus making the company more efficient throughout all the value chain. The ultimate result would be reflected on the product’s price, thus benefiting their customers. Sun Microsystems would then be a good strategic fit for Oracle. The only barrier would be how much Oracle would be willing to pay for all this implicit benefits.

IBM was also interested and they needed to act quickly, doing a defensive acquisition. Sun’s price could have its original price pushed way up because of the amount of companies interested.

To know which price Oracle’s should give to Sun’s shares it should be performed an evaluation through the Discounted Cash Flow method (DCF) and the multiples valuation method. The Discounted Cash Flow (DCF) method is possibly the most commonly used when assessing an investment opportunity. The DCF tells how much profit would you make and adjust it for the value of money. For this valuation is crucial to have the most information possible about the company to make good predictions of Cash Flows, which sometimes is not that easy to get. Multiples valuation is commonly known for being quite easy to understand, simple to put in place and at the same time extremely efficient when there is plenty of data available to do the analysis. With Sun´s principal competitors all being public companies this type of valuation becomes fairly easy and straightforward to compute. Using the discounted cash flow approach, an equity valuation of Sun was performed. From the cash flows estimated to the stand alone Sun Microsystems, using a computed WACC, the Enterprise Value and Equity Value were estimated (Figures are in Tables 1 to 3 in appendix).

The Enterprise Value would account for $7449,31 Million and the Equity Value would report to $6192,31 Million, what would give a price of $8,38, not too far away from the $6,69 per share the market is asking. This miss valuation may occur because of the pessimism the market is showing due to the performance below the average that Sun Microsystems is showing. From the $7449,31 Million Enterprise Value of the company, 95% of the value is coming from the terminal value, $7083,13. This leads to the conclusion that almost all the value is coming from the future and the forecasted cash flows accounts for a small amount of the valuation. Investors are investing in the future and not in the present of the company. The rate of return that Oracle should require on the acquisition is the return on activity calculated in Table 2 – 7,94%. This happens because if Oracle doesn’t acquire Sun they could have a return in that cash equal to the return of activity. The multiple valuation method compares the price and enterprise value multiples of the subject firm with those of similar assets and financial structure – Debt and Equity Value.

The economic rationale for the method of multiple valuation method is the law of one price, i.e., identical assets should sell for the same price. To compute the multiple valuation method we needed to define the peer group first. Apple, IBM and HP are not suitable because of their bigger dimension (market capitalization, Debt, Equity and Share price). Also, to be comparable, firms need to be similar in terms of risk, profitability, and growth. Once the comparable companies were identified, the multiples were computed and a comparison was established between the peer group’s market capitalization and share price and those of the target company (Sun). In this context, where a company wants to acquire another, corporate executive are interested in assessing a target’s total value, reflecting both debt (we assumed net debt in this case) and equity. In this case, the enterprise value is a better basis for the valuation.

That way we used the EV/EBITDA ratio, which resulted in a meaningless value as Sun’s EBITDA is negative. EV/Sales ratio should then be used. In fact, the EV/Sales ratio raised the firm’s valuation to $16375,51 Million against its $6198,17 Million market capitalization. We can also use the Price Earnings (P/E) ratio, which provides an indication of how much investors are willing to pay for a company’s earnings. To compute the P/E ratio we needed Sun Microsystems’ earnings. We got the figures from the 2008 Annual Report Income Statement. We computed the average earnings of 2007 and 2008 and used the figure in the P/E multiple calculations. This ratio raised the company’s share price to $13,63 from $6,69. Practically, this indicates that the acquirer is willing to pay 13,63 times the target’s current Sales. Thought both Sun’s market capitalization and share price raised with the valuation they are still significant below the weighted average of the peer group ($19240,76 Million vs. $16375,51 Million and $22,98 vs. $13,63, which means the firm is undervalued.

All figures shown are in tablet 4 and 5 of the appendix. Regarding the synergies, Lower costs and higher revenues are the principal variables that justify a value of strategic fit as synergy. Lower costs are related with a slight decrement on Sun’s staff and SG&A by 20% to 25% and 22% to 32% respectively. These costs were combined with an expected integration charges close to $1.1 Billion on aggregate, with most (about $750 Million) incurred in 2010, hence an initial loss in 2010 in operating income of about $45 Million and assuming an operating profit by as much as $900 million per year in addition. The synergies generated an enterprise value of $15392,08 Million, stated in Table 7, which is higher than the enterprise Value of Sun stand alone, $7449,31 Million (Table 3). A sensitivity analysis to the cost’s savings, which accounts for more that 20% of the total FCFF changes, is shown in table 7 and 8. Also, taking into account the range of costs, we may conclude that (maintaining other values unchanged) the enterprise value decreases when the percentage of cost saves decrease and vice-versa.

The highest value is achieved with a combination of 25% in costs with people reflected in SG&A and 32% in R&D savings, $22,66 per share. The lowest Enterprise Value given would result in a combination of 20%/22%, giving the $19,14 per share. We can conclude that the companies’ Enterprise Value ranges $3 according with the percentage allocated to each cost saving part, since cost’s saving accounts for more than 20% of the total FCFF changes and it wasn’t a fixed cost or benefit. When there is more than one bidder for a firm, the odds are likely to benefits the target firm’s stockholders. Bradley, Desai, and Kim (1988) examined an extensive sample of 236 tender offers made between 1963 and 1984 and concluded that the benefits of synergy accrue primarily to the target firms when multiple bidders are involved in the takeover.

Independently of the underlying Sun Microsystems’ market value, the goal of both Oracle and IBM is to gain competitive advantage on every bid, making sure they don’t pay more than the synergies created with that acquisition. However, even if the competing bidder appears, Oracle will pay $27,52 per share maximum which is the value of Sun Microsystems’ Synergies plus the current price given in the valuation method used, giving all the synergies to the Sun’s shareholders (Table 7 and 3 to calculation details).This implies an increase of $18,02 per share from the previous proposal, $9,5 per share. 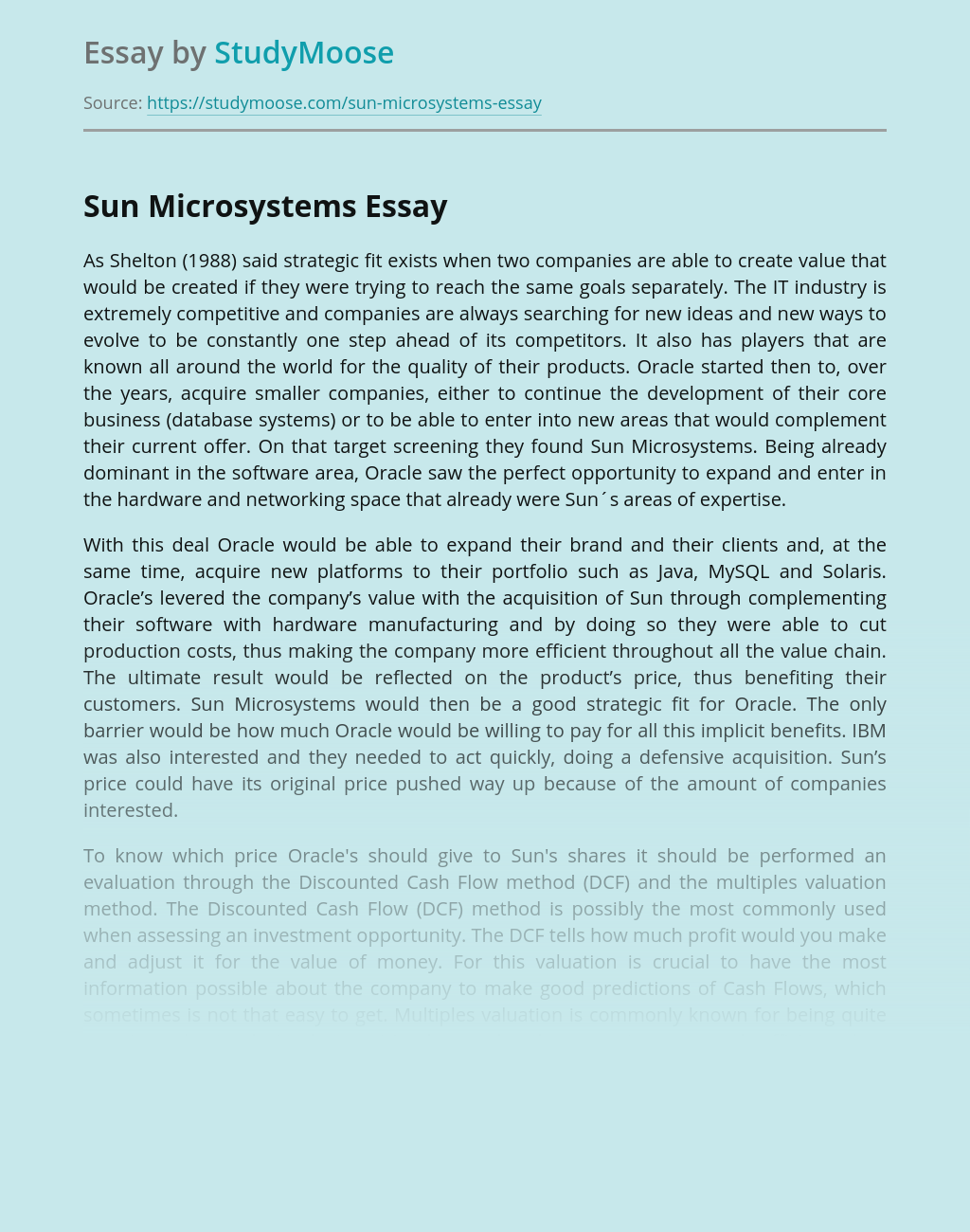