Is Google Making Us Stupid, Summary by Nicholas Carr

As the internet offers us the benefits of quick and easy knowledge, it is affecting the brain’s capacity to read longer articles and books. Carr starts Is Google Making Us Stupid with the closing scene from Stanley Kubrick’s 2001: A Space Odyssey when Dave taking apart the memory circuits that control HAL, the artificial brain of the ship. Carr feels the time he spends online is rewiring his brain. He is no longer able to concentrate long enough to read more than a few paragraphs.

Don't use plagiarized sources. Get your custom essay on
“ Is Google Making Us Stupid, Summary by Nicholas Carr ”
Get custom paper
NEW! smart matching with writer

Even though the internet is useful, it seems to be changing the way our brain takes in information. He feels as though this brain wants to take information in the same way the internet disperses it: in rapid streams. Carr compares himself to a guy on a jet ski instead of a deep-sea diver. He is no longer able to focus and contemplate. Carr shares the story of two bloggers that are also having problems reading and focusing and feel the internet is responsible.

Carr admits that while a recent study at University College London suggests there may be some evidence that the internet is negatively effecting the brain, no long-term studies have been done. With the amount of texting on cell phones and text on the Internet we may be reading more now than when television was the main means of media. Maryanne Wolf, a developmental psychologist, believes that the ability for deep reading that was nurtured by the printing press is being weakened by the way the web puts emphasis on ease and speed of information.

Online reading has created “mere decoders of information”, leaving a detachment in the interpretation of text.

While language is instinctive, reading must be learned; studies show that our mental circuitry is mapped differently dependent on the language we are reading. This suggests these circuits will be mapped differently when we learn via media and technology as opposed to reading printed material. Similarly Friedrich Nietzsche found that “our writing equipment takes part in forming of our thoughts”; when he started using a typewriter his terse prose became even more concise. While it used to be believed that the human brain was fixed by adulthood, James Olds, a neuroscientist, notes that nerve cells are continually forming new connections and rejecting old ones. Lewis Mumford, author of Technics and Civilization, explains how the clock “disassociated time from human events and helped create the belief in an independent world of mathematically measurable sequences”. The invention of the clock helped to create the scientific mind but also took away our sense of reason as described in Joseph Weizenbaum’s book, Computer Power and Human Reason: From Judgment to Calculation.

Nicholas Carr explains that the Internet encompasses the majority of our other intellectual technologies. The internet also takes in multiple mediums and morphs them; for example, articles are bordered by flashing ads and hyperlinks. This technique is also being mirrored in other forms of media, with television programs containing pop-up ads and newspapers and magazines having shorter articles. As media continues to have more influence over our thoughts there have been few studies done on how the internet is reprograming us. Carr believes that Frederick Winslow Taylor, the author of The Principles of Scientific Management, was the father of the industrial revolution. The system Taylor created for breaking a job down into roles is still used today in factories worldwide. Taylor held that his algorithm provided “the gradual substitution of science for rule of thumb throughout the mechanic arts.” Carr suggests as computer engineers gain more power, they search to improve the internet through Taylor’s methods, looking for the perfect algorithm to accomplish “knowledge work”.

Google’s headquarters, “Googleplex”, is “the Internet’s high church and its religion is Taylorism.” Google gathers data from search engines and other webpages and directs thousands of experiments with that data. Google’s ultimate goal is to refine algorithms from that information that will let them create the perfect search engine that “understands exactly what you mean and gives you back exactly what you want.” Google views the information as a product that can be used to make us more fruitful thinkers.

Nicholas Carr wonders just how far this goal to better our thinking will go. He feels the founders of Google, Sergey Brin and Larry Page, are trying to turn the search engine into artificial intelligence that connects to our brains. Carr suggests that it is admirable to try and solve problems that have not been solved before, but questions if artificial intelligence will really make humans “better off”. The companies of the internet operate with the ideal that our minds should operate as high-speed data-processing machines and the faster we surf the internet the more data companies like Google can obtain. Carr examines his own worry and compares it to the worries Socrates had about written word and the many worries others had about Gutenberg’s printing press. Carr encourages us to be skeptical of his skepticism, because there is a possibility the internet will bring a “golden age of intellectual discovery and universal wisdom will follow.” His fear is that we will lose not only the knowledge we acquire when we read deeply, but also the deep thought that is cultivated when we read. Richard Formen, a playwright, sees us as being spread too thin and that we are losing our “inner repertory of dense cultural inheritance.” Carr brings us back to his start, saying he is troubled by the closing scene in the movie 2001 and Kubrick’s prophecy that as we will come to depend on computers as our own intelligence becomes artificial.

Is Google Making Us Stupid, Summary by Nicholas Carr. (2016, Mar 06). Retrieved from http://studymoose.com/summary-of-is-google-making-us-stupid-by-nicholas-carr-essay 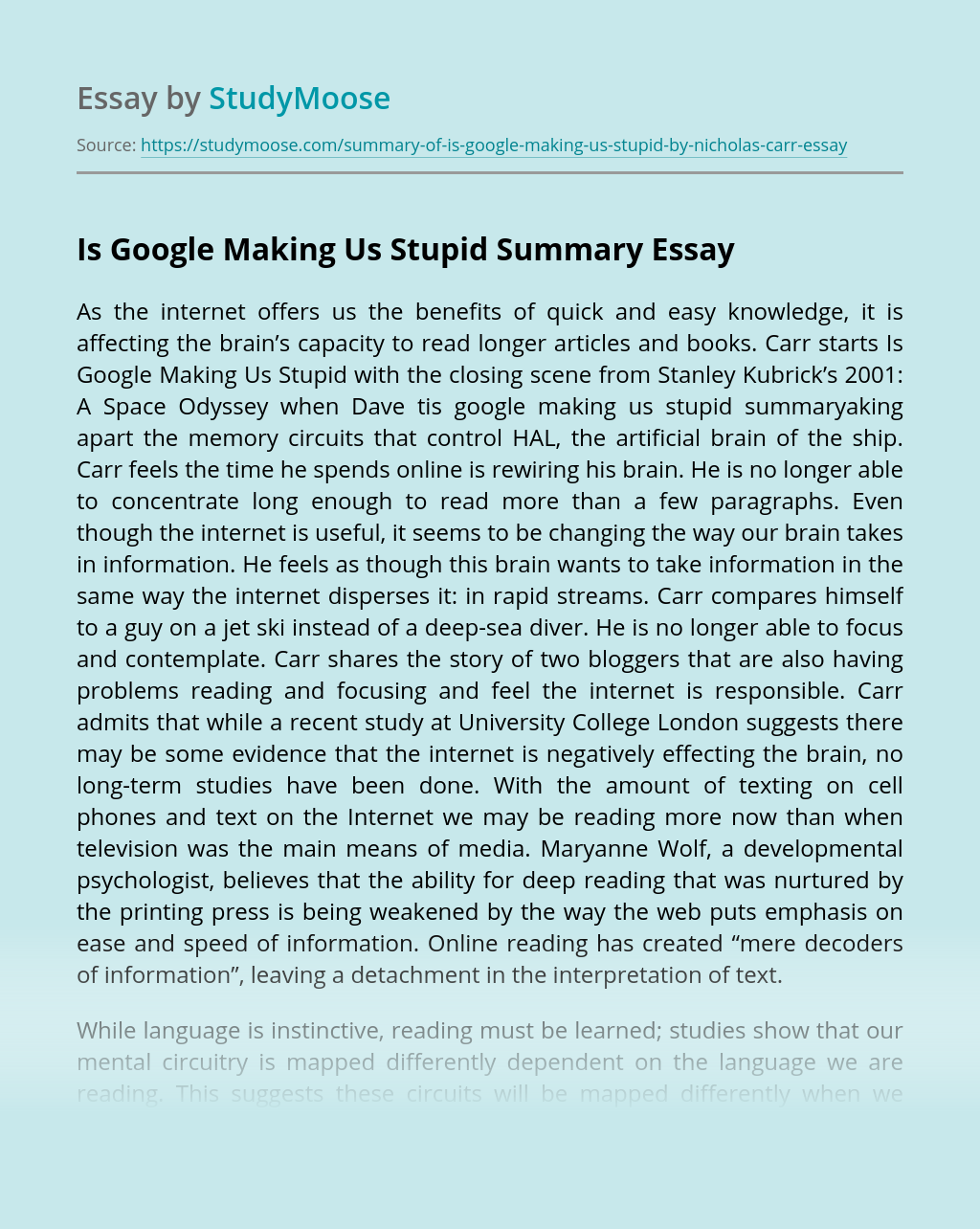