Gaudium et Spes is probably the most controversial of the Vatican II documents, with the exception of Dignitus Human. It is considered as a pastoral constitution; it comments on the ever-changing cultural scene. According to Fr Robert, proponents consider Gaudium et Spes as the canon within the canon, however, he disagrees with this view because he ppppoint out that Gaudium et Spes should be read in the light of Lumen Getum. Fr Robert also pointed that for tractors Gaudium et Spes is the source of mischieves in connection to the morden world.

Turn in your highest-quality paper
Get a qualified writer to help you with
“ Summary of Church’s Gaudium et Spes ”
Get high-quality paper
NEW! AI matching with writer

Gaudium et Spes is the longest of the Vatican document and in the history of the magisterium. Major complains given to it are the critics some which were given by Joseph Ratzinger, who later became Pope Benedict XVI. Before and after the publication of the document Rartinger was critical about the kind of imminentism and a reduction of the supernatural to the natural, he accused the document for giving a reading of the kingdom of God in social and political terms.

For Rartinger many parts of GAudium et Spes were frankly pelagianism; they were heretical.

The main point of Gauidium et Spes is stressed right from its introduction. “the joys and hopes and sorrows…”. This is where a lot of debates come from. Gaudium et Spes exshoorts that the Church has the transformative mission of Christofying the world, not so mkuch of mmodernizing the Church. According to Fr Robert, GAudium et Spes is about Christofying the world, and this does not mean that the Church has to become “hand and head with culture”.

The Church is not called upon to yield to the cultural beliefs. The role of the Church is too read the signs of the times, both good and bad, and to interpret them in the light of the gospel. “It is accordingly in the light of Christ who is the image of the invisible God that the council…” The main point that Gaudium et Spes talks about is on human dignity. Human dignity comes from the ffact that we are the beloved of God; we are created in God’s image. Gaudium et spes stresses that one of the signs of human dignity is the intellectual power. Our minds hunger for truth, and no matter how much knowledge we have, we are never satisfied.

The dignity of the human being is displayed in the conscious. The conscious is the strange voice from within the human being which tells us right from wrong. The conscious wants the good itself, and the will witnesses to this holy longing. Thus, the conscious is regarded as part of the image of God. Our own freedom is the image of God. This freedom is not a freedom in opposition to the good or to that which is value, but is in surrender to it. “Genuine freedom…” Gaaudium et Spes also addresses some of the contemporary issues, such as the reaction to corruption and negativity in the Church and the bad examples of religious people. Gauidum et spes gives the classic Catholic response that god must not be construed in a competitive manner. God is not in competition with us.

He is not like the ancient gods that came to destroy. God is the “I AM” who fulfills the deepest longings of the mind. He illumines us and not destroy us. Gaudium et Spes addresses urgent problems such as marriage and family. The family exists as image and symbol of the Divine love in the world. Children are the supreme gift of a marriage. Gaudium et Spes states that Catholic couples should pro-create with generous and Christian responsibility. They are send forth to multiply. Gauidium et SDpes also addresses social and political life; this is at the heart of the Catholic Social Teachings. The document states that economic progress ought to remain within the control of the people and not to be committed to the sole decision of the few or of groups possessing too much economic power or political power. 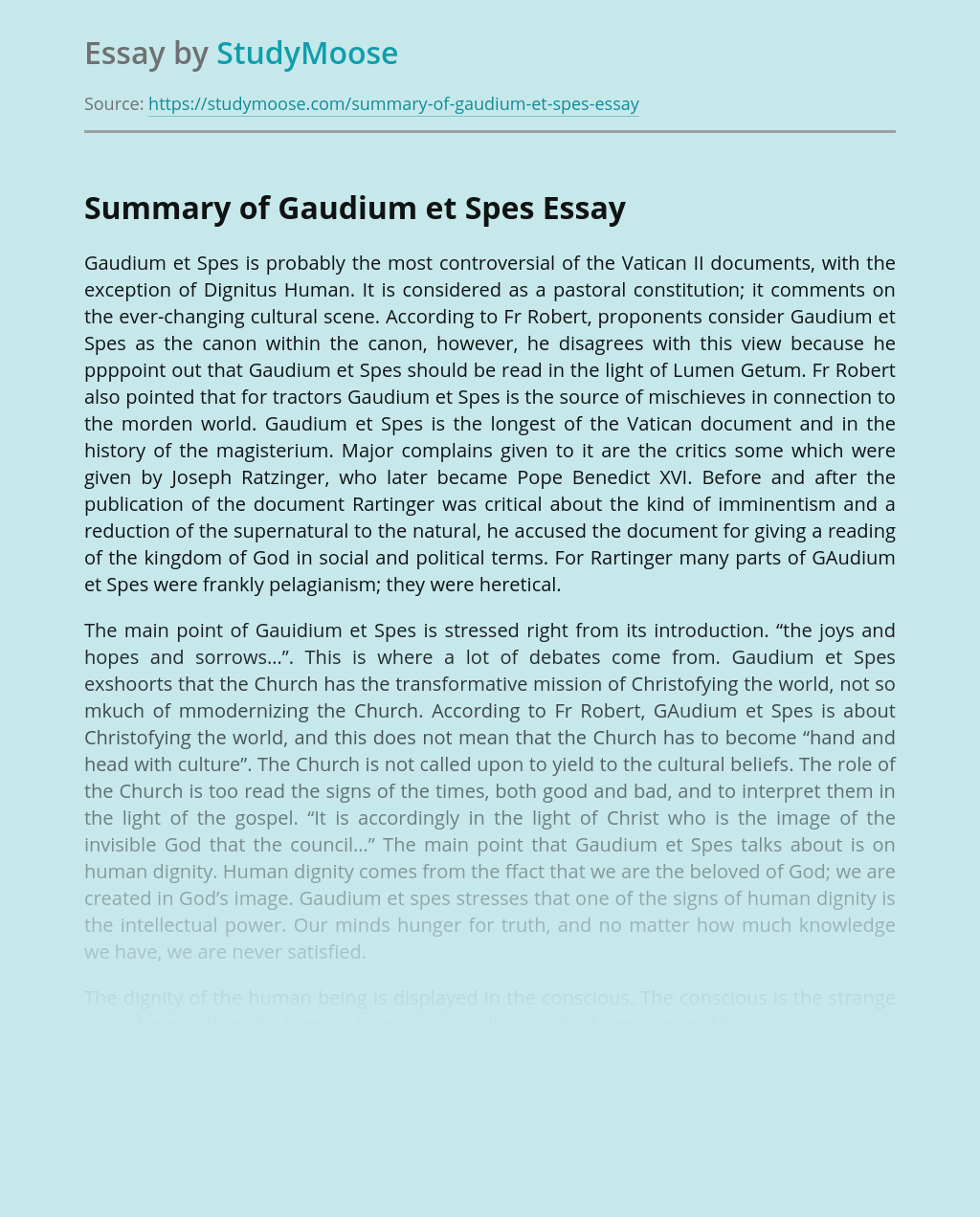 Turn in your highest-quality paper
Get a qualified writer to help you with
“ Summary of Church’s Gaudium et Spes ”
Get high-quality paper
Helping students since 2015
Stay Safe, Stay Original