Summary of a Book A Woman in Berlin

After careful consideration of all of the evidence submitted to the court, including testimony of the witness I have carefully weighed the facts and find the Defendants guilty as charged. Unjust, cruel, barbaric, and disgusting infliction of pain is despicable in any circumstance. The Court has determined that the acts of the Defendants should not be treated “ex post facto”, but due to the circumstance of war, follow the rules of International Law, even though their government did not recognize the Geneva Convention or International Law at the time.

Don't use plagiarized sources. Get your custom essay on
“ Summary of a Book A Woman in Berlin ”
Get custom paper
NEW! smart matching with writer

This court will impart the sentences to be carried out as no less than the penalty of death. May God save your souls. The Defendant’s should be punished in order to punish them, and remove certain liberties that they may enjoy today. “What we propose is to punish acts which have been regarded as criminal since the time of Cain and have been so written in every civilized code. ” (Jackson, 1946). Another reason for the punishment of death is not to return anything to the victims that have been lost, but to take away the feelings of power that the Defendant’s may still carry in their egos.

For, I am afraid that once man feels the insatiable sting of empowerment over another human being, and knows deeply in their heart and mind that they can steal it once again, the temptation to repeat such behaviors are potentially irresistible. Once the Defendant’s are permanently removed from society, they will never be able to commit crimes similar to these again.

Unfortunately, one can never return to the victims their purity, or erase the memories of the atrocities that they had to endure.

It is sad that the victim’s spirits can never be fully repaired, for there are no reparations available. Finally, this sentence is to be imparted in order to do the only thing that one can do, and that is to bestow closure upon the victims by delivering a fair and just ruling. I understand that many of the Defendant’s are in denial, or they feel justified in their participation of furthering the cause of the war.

Wisdom in making a ruling is not only appreciating things that society has learned from the past, but also the realization that a ruling of this serious nature and of this magnitude, the weight will effect the rulings of those crimes similar to these in the future. After careful consideration, and in light of all of the facts presented from both the prosecution and defense’s respective arguments, this Court must act with utmost responsibility in making a determination.

I have heard and understand that the Defendant’s were subjected to propaganda, and were even made to believe that their activities are just and right. Is it just to damage other human beings and bring them to the level of devastation and subject them to such desperation? In desperation of the human condition, this witness allowed her mind to adapt to the horrific circumstances surrounding her and mold her behaviors in order to protect her life. She is a brave and strong individual who can never truly realize what is meant by restitution as it is defined in our court system.

The removal of the lives of these Defendant’s will remove one more man who has been corrupted and warped by war. As an individual bearing witness to the testimonies of the victims before me today, I would not be able to sleep at night or live during the day knowing I had let one of these Defendant’s go free. I do not believe in allowing evil to triumph. I wonder how each of the Defendant’s would have ruled against a German man who might have raped a Russian wife, daughter, or fiancee’.

Summary of a Book A Woman in Berlin. (2020, Jun 01). Retrieved from https://studymoose.com/summary-of-a-book-a-woman-in-berlin-essay 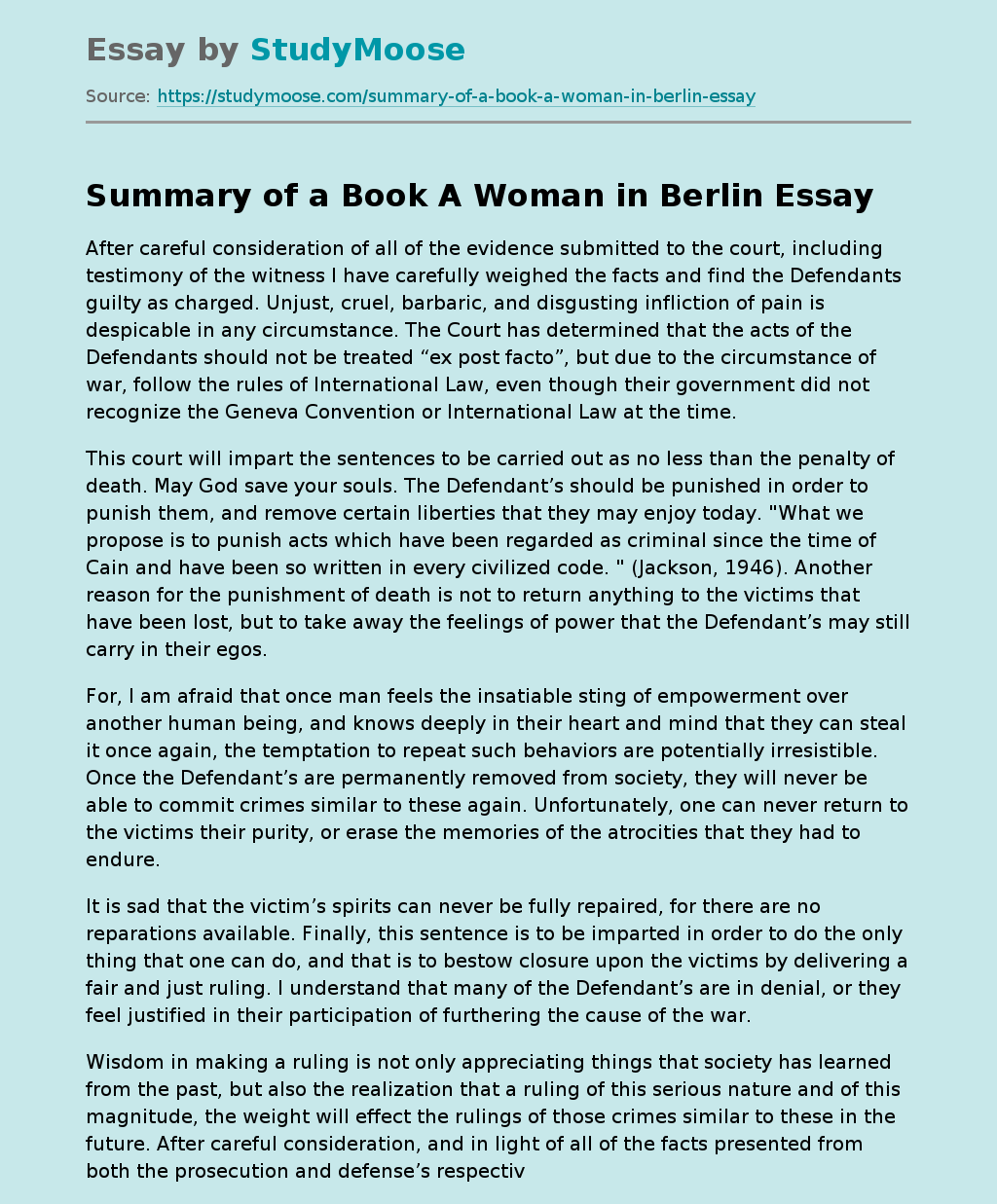