After the war Berlin as well as all Germany in 1949, divided into four territories which belonged to an Allies (United Kingdom, France, United States and Soviet Union). Eventually there appeared split due to different political visions which became Eastern Germany with communistic state under Soviet Union government and Western Germany with independent representative democracy.

The Berlin Palace Stadtschloss, 15th century Baroque palace and by 17th century became symbol of Prussian royal family and it’s might. Unfortunately, the palace was damaged in night bomb raid and section of it burned with several halls in ruin.

Don't use plagiarized sources. Get your custom essay on
“ Fall of Soviet Regime and Berlin Wall Fell ”
Get custom paper
NEW! smart matching with writer

After division of the Berlin among victors in 1949, palace was located 2 kilometers away of the future berlin wall. Eastern Germany government revealed that it wasn’t willing reconstruct palace Stadtschloss, because it represented the old “tyrannical monarchic part of Germany” witch Soviet Union was trying to erase and replace with their “modernistic” views.

Palace temporarily served as gallery and exhibition site. On 1950 Remnants of the Berlin Imperial palace has been demolished and this supposed to showcase German Democratic Republic disdain to corrupt Prussian monarchy and free some space for “monumental modernist buildings around central plaza to hold official political events”.

Before Palace demolition with 5 tons of dynamite some people said:” According DDR estimation on palace reconstruction cost will be 32 million mark the ddr”;” with the same effort and little bit of good will, you will have roof of the castle restored shut, eliminate damage and new windows can be installed. That would have been construction weather you and another weather decay where prevented.

Yeas it would, be there enough money around, lightly damaged rooms make usable again….”(German> Eng dub)

The project of the Building “Palast der Republik” or “Palace of the Republic” was the modernist building construction of which was proposed by Eastern German leader Erich Honecker in 1970’s. The building was planned to house Eastern German parliament for official occasions and meetings, easily adjustable for public visiting. Accommodating numerous bars and restaurants, hosting art exhibitions and various cultural activities.

Construction of this multi-purpose building began in 1973 which cost state estimated to be 485 million up to 1 billion Eastern German marks. As ironic as it sounds it exceeded Berlin Palace reconstruction costs in post war years. The project design was executed in modernistic style by Heinzz Gaffunder and Building Academy of the German Democratic Republic -(Bauakademie der DDR). The most destinc feature of the building were bronze-reflective mirrors giving warm and welcoming impression to the visitors. With two massive blocks and glass façade connecting them, it gave the building it’s defining shape of a cuboid with a length of 180 meters, a width of 85 meters, a height of 32 meters. Site was occupied with Palace of the Republic from the east side and parking lot from the west witch was used as political stage and tank maneuvering U-turn platforms.

The grant opening ceremony “Palast der Republik” was held on 23rd of April 1976. For public it was accessible on 25th of April. This project was representing new aspirations of DDR. “Palast der Republik” project as whole was warmly accepted by the eastern Berlin public after completion of Berlin Wall, they often were saying -” it’s like something you will be able to see in the western Germany”. Since west and east Germany were divided it didn’t enable eastern Berliners to pickup TV and radio signals to know of commodities and opportunities available in the west. And that public center of culture was trying showcase that is same level of luxury opportunities available in the communistic society.

During the construction of the projects load bearing structure was used 5 thousand tons of powdered asbestos which is equal to 720 tons of raw asbestos. At a time, asbestos was very popular building material around the world, well until world discovered it’s health hazardous properties. Be it karma or retaliation to German Democratic Republic for tearing down the old palace.

After massive protests and fall of Soviet regime Berlin wall fell(deconstructed) in 1989. And eventual establishment unified federal German government in 1990, it was very soon discovered that “Palads der Republic” being uninhabitable, due to asbestos contamination. It’s understandable government care for its public and immediate closure of the building. Public felt as if it lost something the moment site was denied entry of the public. Eventually project of extraction of asbestos was initiated and slowly but surely once grant building and now hollowed out, leaving only iconic brown thermo glass panels. Before final deconstruction of the walls on the roof of the building was installed “ZWEIFEL’ (doubt -Eng dub), representing governments swaying decision what to do with the” Palads der Republic”. Public divided some were hoping to see grand halls of that modern building filled with life once more, others expressed their wish for something else due to aesthetical view on the historic center of berlin smudged by modernistic building among Baroque style landmarks.

Palace was important as National Heritage and what soviets did with it is unacceptable, but on the other hand they were trying to establish their ideals and views in financially poor Germany. Some times we need to do sacrifices, but some action may cause complex in later generations and they will irreversibly lose something that defined them as stoic individuals. To my surprise the younger generation desire to oppose of reconstruction of the Stadtschloss Palace is shocking, while older generations are just waiting for it’s completion. Contradictions happen that both generation lost something that was part of their memory. 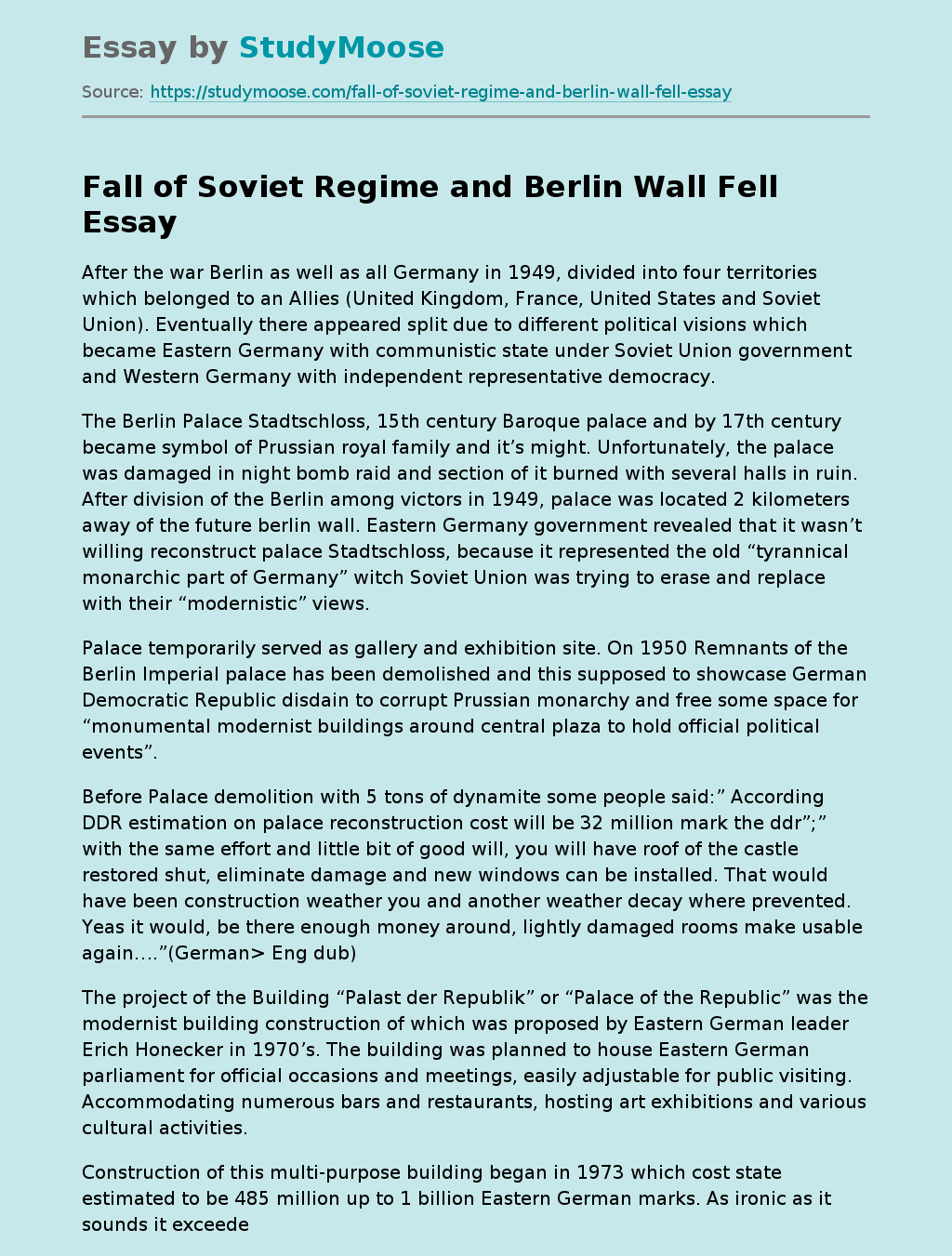