In the first chapter of The Bell, we learn about Dora through many ways of Iris Murdoch’s characterisation. These include her physical appearance and the clothes that she wears, but mostly through her actions displaying her personality.

Dora’s description as a student tells us that she was ‘plump’ and ‘peach-like’ as well as ‘ugly and wretched’ and that she liked to wear big multicoloured skirts with sandals. The skirts and sandals are brought up early in the chapter because they are also mentioned a few pages later when Dora discusses how life has changed for her since becoming Mrs Greenfield.

Don't use plagiarized sources. Get your custom essay on
“ Summarising The Characterisation Of Dora Greenfield In The First Chapter Of ‘The Bell’ ”
Get custom paper
NEW! smart matching with writer

As Dora changes into being Paul’s wife, she not only changes her name, but also her appearance and outlook on life. Dora ‘abandoned’ the big skirts and sandals for smarter outfits which she did not really like, but bought to fit in with Paul and his friends, and she thought of his friends as being more intelligent than herself, therefore thinking she did not fit and feeling uncomfortable about their marriage.

When she began to see her old friends from school more, it becomes clear that Dora and Paul are not suited, as she returns late from a party. Paul’s violence toward Dora threatens her and makes her feel scared and afraid of him, but from the first paragraph, we also know that Dora feels guilty about feeling afraid.

Dora wants to be free to enjoy herself while she is still young, but Paul wants her to be at home and to be a wife. This makes Dora angry and rebellious, and the only way she knows to be rebellious is to be with her old friends from school and especially Noel.

Dora is obviously a weak woman because she stays with Paul for such a long time even though she knows that she does not want to be with him throughout this period of time. When she does eventually leave him and move in with her mother, and then later Noel, still Dora cannot stop thinking of Paul and feeling guilty about the way she had hurt the man who loved her. This shows that Dora is a very caring person and that she has a very active conscience.

Feeling free and away from Paul, Dora begins to wear big multicoloured skirts and sandals again. This shows that without Paul, Dora is like a butterfly free to do what she wants and to buy what she wants, and to wear what she wants. However, Dora does not like this freedom as much as she desires it when she is with Paul. This is shown on page thirteen when Dora decides to return to Paul.

When Dora receives a letter in return from Paul with arrangements for her return to him, she is not happy with the casualness of it all, and this shows that she would have liked more attention from him. As well her caring side, which was shown before, this also shows that Dora can be selfish at times, but also within reason.

Because of the way that Paul had expressed his love for her before, Dora had expected Paul to com ‘running up to London to receive her’ and because of the fact that he didn’t, I think Murdoch is also giving us good characterisation of Paul and how he is unpredictable.

On the day of leave from London, Noel takes Dora to Paddington Station and we witness the first dialogue take place after Noel has found her a seat on the train. Dora wishes him to go, and this shows that she is nervous and uncomfortable about having her lover standing on the platform at one end, where at the other end her husband would be. Even though Dora is uncomfortable and says that she does not want Noel there, she still holds his hand which shows that Dora does not necessarily mean everything she says and that she is possibly confused within her own mind about whether she really wants to go back to Paul and leave her life of freedom behind her.

As Dora gets into to the train she checks herself over in the mirror to see that she looks and although this might show signs of vanity, it could also show that she wants to look nice for Paul when she sees him and that she cares how she looks in public. Her facial description of ’round well-formed face’ and a ‘large mouth that liked to smile’ are both quite flattering suggesting that Dora is caring for how she looks, but also that she wants to impress and feels good about herself. These are also suggested by the description of her eyes that were ‘dark slaty blue and rather long and large’, and also the description of her ‘vigorous eyebrows’. Although Dora’s appearance may seem slightly average from the way that she has described it, her hair makes her sound like a marvel with ‘golden brown’ ‘ long flat strips down the side of her head’. This small description of her face shows that Dora is quite proud of the way she looks and whether or not she is trying to impress Paul, she believes that she will.

However her facial appearance made Dora feel, her body obviously makes Dora feel uneasy and she does not like it as much as she Murdoch says ‘Feeling fat’ and also by using the onomatopoeia ‘squeezed’ to make Dora sound fat and rather large in size. Dora continues to moan in her thoughts about her shoes and her skirt being too tight, which gives the impression that she is like a whinging child who is not growing up. This links to the idea of her marriage to Paul which is uncomfortable for her because of the age difference where she feels like a child still. It is almost as if Dora is thinking of Paul as a grown up, and herself as a child and therefore she feels the need to whinge about something, and her chosen something is the tightness of everything she is wearing, coincidently, they are clothes she is wearing to impress Paul.

Summarising The Characterisation Of Dora Greenfield In The First Chapter Of 'The Bell'. (2020, Jun 02). Retrieved from https://studymoose.com/summarising-characterisation-dora-greenfield-first-chapter-bell-new-essay 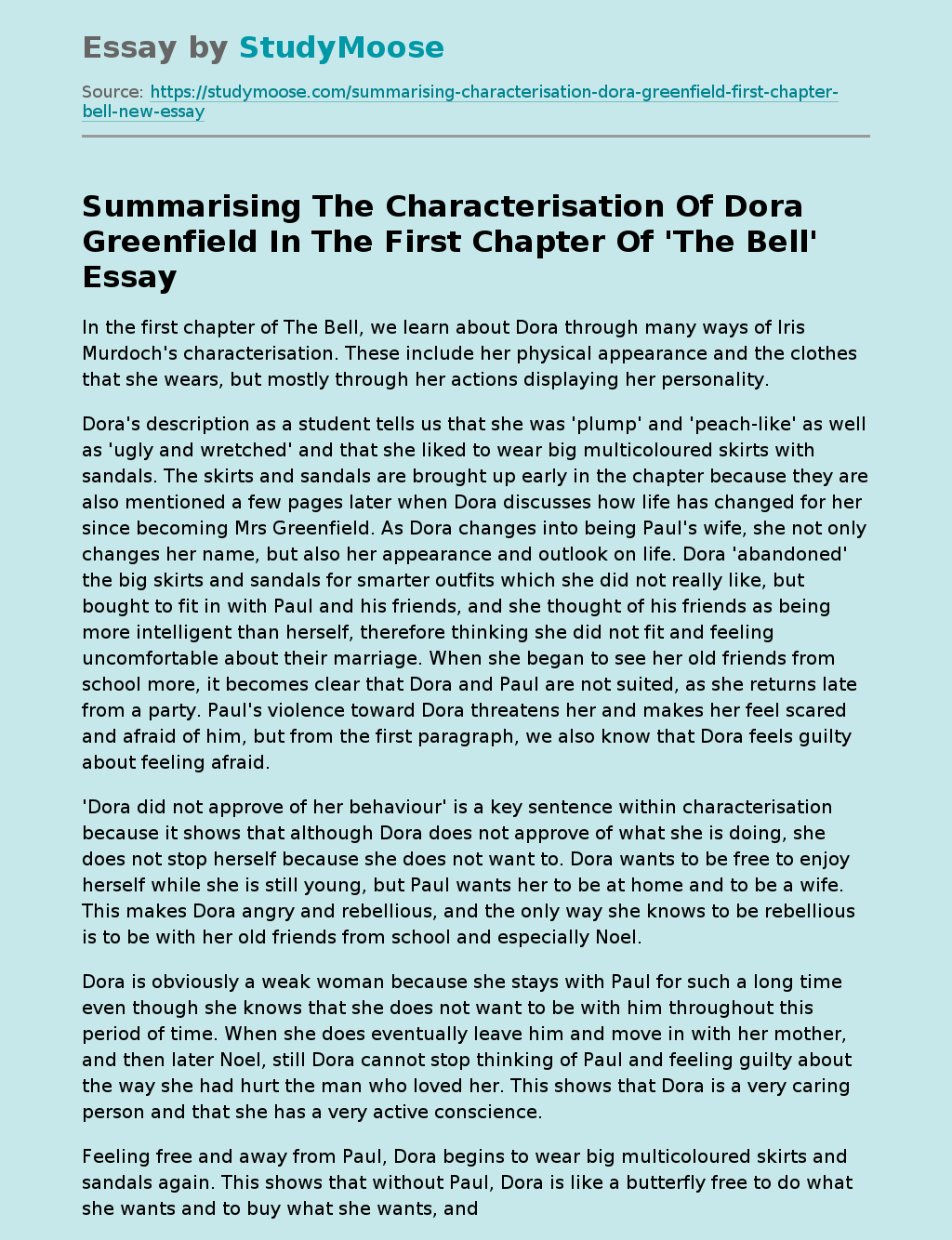