Stylistic Analysis of “The Last Leaf” by O. Henry

The story under analysis is written by an American writer William Sydney Porter (September 11, 1862 – June 5, 1910), known by his pen name O. Henry. His short stories are known for their wit, wordplay, warm characterization and clever twist endings. None of his stories can leave the reader cold blooded. All the stories have deep sense, make you debate a matter in your mind and have a lot of humorous affects at the same time. But “The Last Leaf ” can`t make you burst of laughing.

Don't use plagiarized sources. Get your custom essay on
“ Stylistic Analysis of “The Last Leaf” by O. Henry ”
Get custom paper
NEW! smart matching with writer

This story is about two young ladies, Johnsy and Sue, who were fond of art and lived together in a studio. Johnsy had fallen ill and was dying of pneumonia. She watched the leaves fall from a vine outside the window of her room, and decided that when the last leaf would drop, she would die too. But an old, frustrated artist named Behrman, who lived below Johnsy and Sue, risked his own health in order to give her hope in order to survive.

To my mind, there are two major themes of the story the power of hope and self-sacrifice which show that a diseased mind is even more harmful than the disease itself.

This is clearly evident in Behrman, an artist who lives on Johnsy and Sue´s house first floor. He always said: “Some day I shall paint my masterpiece.” Knowing that the girl was badly ill, he decided to sacrifice himself painting an ivy leaf in the window when the real one fell to lift his friend’s spirit.

And the last leaf on the wall is hope and life which he left to not only Johnsy but also readers. The main idea of this story lie in the doctor`s words: I will do all that science, so far as it may filter through my efforts, can accomplish. But whenever my patient begins to count the carriages in her funeral procession I subtract 50 per cent from the curative power of medicines. And it touches not only this the very situation but it touches upon any other problems in the world. We all make our own destiny. Why one person dies after just getting a horrible prescription, other lives with feral diseases for a long-long period of time? Very often we become the cause of our misfortune ourselves. And it`s a question to think over. The events in the analysed story happen in “a little district west of Washington Square the streets have run crazy and broken themselves into small strips called “places””.

It is depicted as an unwelcoming place: “There was only a bear, dreary yard to be seen, and the blank side of the brick house twenty feet away…its skeleton branches clung, almost bare, to the crumbling bricks.” However, the cohabitation between Sue and Johnsy seems truly merry until the one of the girl became infected with Pneumonia. It is presented in a detailed way and reflects the mood of the story. From the point of view of presentation the story is a 3d person narrative. The characters we meet in the story under analysis are Johnsy, Sue and Mr.Behrman. To describe its characters the author uses a lot of colorful and vivid stylistic devices. About Johnsy we can read that she is “a little woman with blood thinned”. She faced such a terrible disease as Pneumonia and wasn`t able to struggle the cold, she was ready to die because of the last vine leaf would soon fall off the tree. She imagined that she like that ivy leaf wasn`t ready to come over her destiny.

But her friend Sue was strong enough to help her friend. The author doesn`t give us any descriptive expressions to understand her personality but we can realize it though her actions. She didn`t give up her friend for a minute, she was eager to help her mentally not even physically. She tried to make her believe in herself and forget the silly idea about the least leaf. Mr. Behrman, the third character, was able to help Johnsy to recover. At the expense of his life he painted the leaf and put it on the ivy vine to make Johnsy think that she can pull her round as the last leaf could be stable to horrible weather conditions. Mr. Bhrman died but his long-desired masterpiece was painted. Her the author uses antonomasia, the word “masterpiece” meaning not a picture but his brave action in order to save person`s life. Describing Mr.Behrman the author uses such vivid epithets as “a fierce little old man”, “a horrid old – old flibbertigibbet”. In old man`s speech me can find a lot of interjections “Vass!”, “Ach”, “Gott!”, it tells us about his strong and emotional personality.

After analyzing all these information we can come to the conclusion that instead of author`s words to Mr. Behrman we see that he is very noble person having strong character. At the beginning of the story the author present us to another character that takes part in the action. Mr. Pneumonia is a terrible disease. In this case the author uses a very strong stylistic device as personification. He describes it with the help of epithets “old gentleman”, “unseen stranger”. It “stalked about the colony”, “touching one here and there with its icy fingers” (epithet). It was also “the red-fisted, short-breathed old duffer”. In order to portray the characters, describe the setting and also create the general mood of the story the author uses such stylistic devices as oxymoron “magnificent scorn”, antonomasia “way to Art, way to Literature”, zeugma “and found their taste to art, chicory salad and bishop sleeves”, comparisons “ Johnsy as a fallen statue”, “just like one of those poor, tired leaves”, “she was light and fragile as a leaf herself”.

There a number of epithets towards the ivy wine tree: “an old, old ivy wine”, “a confounded vine”, “the lone ivy”, “silly ivy leaves”. As for the plot, In the exposition O. Henry describes the section of town called Greenwich village, and describes the various artists and free-thinkers that inhabit it. Among those are Sue and Johnsy. There are several points of rising action. The first is that O. Henry mentions that pneumonia has struck the village. The second is that Johnsy gets it, and the third is that the doctor has not much hope for her. Lastly, Johnsy declares that as soon as the last leaf falls off the ivy outside her window, she will too “go away.”

This leads to the climax, where that night Sue and their unique and surly neighbor Behrman, wait the night, to see if Johnsy passes. Sue opens the window the next morning to find the leaf there. The falling action is that the leaf stays there, and Johnsy gets better. The resolution is when Sue tells Johnsy that the leaf wasn’t real, that Behrman painted it, and subsequently died from pneumonia himself. The types of speech employed by the author of the analysed story are narration and dialogues. Summing up the analysis of the story “The Last Leaf” it should be mentioned that O. Henry brilliantly uses epithets, comparisons and other stylistic devices which help to reveal the main characters’ nature, to create the atmosphere and mood of the story. Due to the author`s colorful and vivid language of writing it was really interesting to read.

Stylistic Analysis of “The Last Leaf” by O. Henry. (2016, Sep 14). Retrieved from https://studymoose.com/stylistic-analysis-of-the-last-leaf-by-o-henry-essay 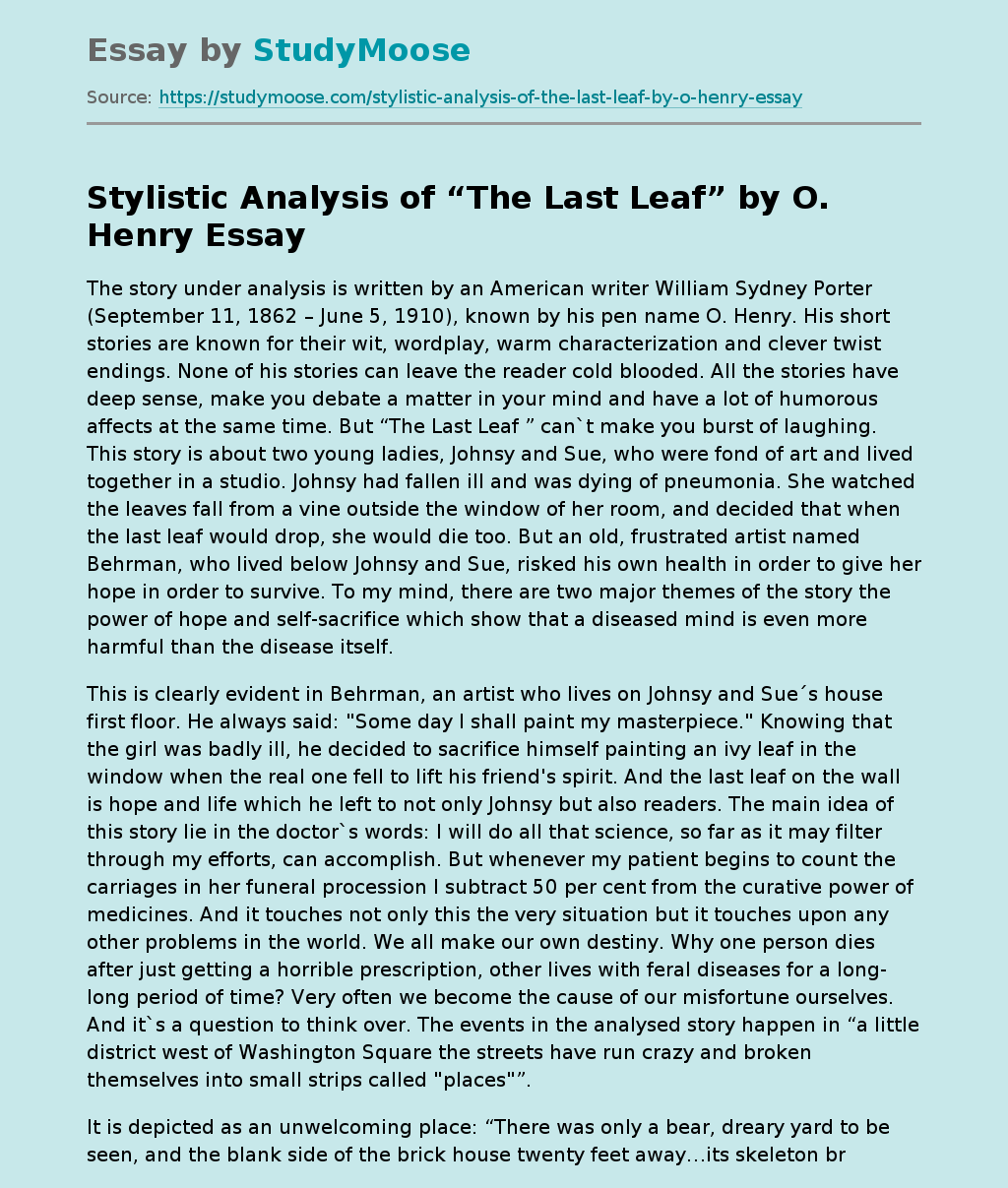