A very interesting stuff story by Annie Leonard – The Story of Stuff which tells you how stuff works in 20 minutes video. It is an interesting story and here is my reviews and summary. I do agree with most of her points but not all of them. I agree with her because she said “this system is in fact in crisis because it is a linear system and we live on a finite planet and you cannot run a linear system on a finite planet indefinitely”.

Don't use plagiarized sources.
Get Your Custom Essay on Story of Stuff Reflection Just from $13,9/Page

I personally love and agree with this statement. The key point “Extraction” is “We’re running out of Resources”, I definitely agree with this. The reason is simply due to fact that we’re using too much stuff that is not necessary. I’m surprise with few facts that mentioned by her such as 80% of the planet’s original forests are gone, losing 2000 trees a minute in Amazon and etc.

In the section “Toxins in, Toxins out” she said, we use energy to mix toxic chemicals in with the natural resources to make toxic contaminated products.

These contaminated products such as computer peripherals contain BFRs which are very super toxic to our brains and eventually inside our women’s breast milk. I don’t think toxic in the CPU is flying around in the air. Another ridiculous example she tries to use is saying there are toxins in our pillows. I think she’s using the wrong example to impress us. The key point that she wants to bring out is, “we consume too much”. We consume over what we suppose to consume and not only that, we’re encouraged to do that to keep the material flowing. Another important point is the “Planned Obsolescence” which I also very agree with this.

Some products are really designed in such a way… Another thing is the advertisement which eventually causes “Perceived Obsolescence” that convinces us to throw away stuff that is still perfectly useful. I’m not sure whether the system is in crisis or not now but eventually it will I believe. It is a matter of time but what we can do is to delay it and not to completely avoid it. It looks like she believes that is something possible.

The first thing that we want to do if we seriously want to solve this problem or crisis is to reduce the world population. With less population, consumption will be less, resources will be used less too and toxics less too. The second thing we can do is to consume what is necessary. This is not only good to the environment but also good for our own personal finance. 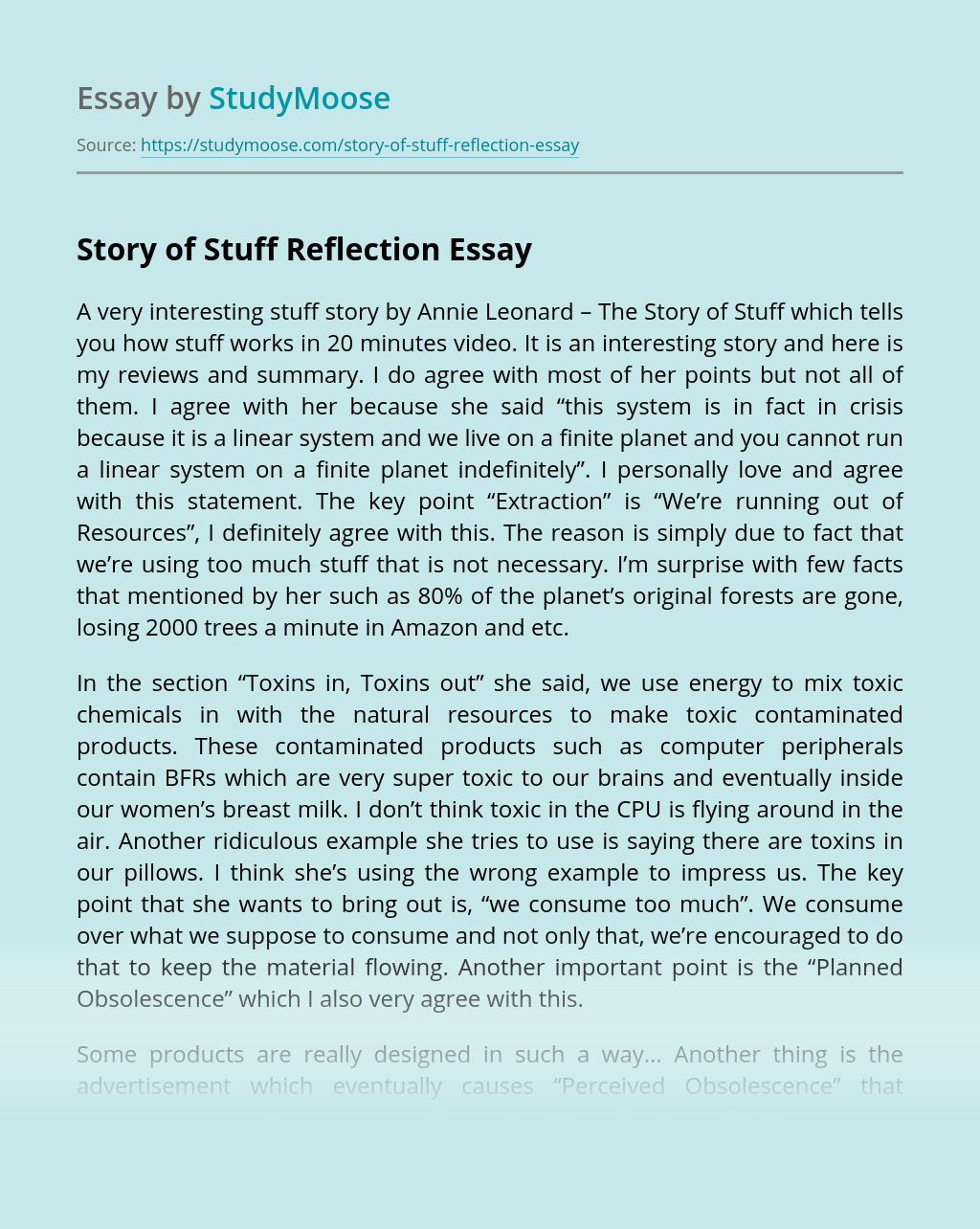 Australia is home to among the most culturally diverse populations in the world, and the population continues to grow (National Health and Medical Research Study Council, 2006). This broadening variety produces a potpourri of cultural mindsets, beliefs and worths unlike the dominant Westernised view. The cultural distinctions impact on how people comprehend and experience end-of-life...

View sample
I, Being Born A Woman And Distressed

This sonnet of Edna St. Vincent Millay is a literary piece shows many faces and expresses a lot of significances. However even if it has many significances, the basic message and significance is about unrequited love. It reveals subduing sensations; yearning and a desire for an enthusiast. The intriguing factor of “I, Being Born a...

View sample
Get Essay
How Is Curley’s Wife Presented - Victim or Villain?

Curley’s wife is the only women at the ranch in Of Mice and Men. She is generally portrayed as a young, lonely, bored and childish girl. “Baloney!” is her ‘word.’ This single word shows that she thinks she is a movie star. No one really talks like this. All the way through the book, it...

Personal Reflection on Anne Frank’s House I chose to compose an individual reflection on the Anne Frank’s House traveler attraction in Amsterdam because I have 2 children. As a parent, I desire the very best for them and most importantly, their safety. I would do the exact thing what Anne’s daddy had provided for them....

Theseus and Achilles were both great heroes that played important roles in Greek Mythology. Theseus saved many lives by killing a Minotaur, and by solving the labyrinth. Achilles was a fierce combatant for the Greeks in the Trojan War. Both heroes accomplished many great challenges in their lifetimes; however, it is hard to decide who...