“Although Foster’s melodies are very familiar, amazingly little is known about the composer.”[i] This quote from Tomaschewski is an appropriate summarization of Stephen Foster’s legacy. Famous songs such as “Oh! Susanna”, “Camptown Races”, “My Old Kentucky Home”, “Jeanie with the Light Brown Hair”, and “Beautiful Dreamer” are quintessentially American songs that can be hummed by most people. However, most people cannot tell you who wrote them. These songs, as well as many more, were composed by Stephen Foster, America’s first professional songwriter[ii].

It is quite fitting that the father of the most definitive American folk songs was born on July 4, 1826, the 50th anniversary of the signing of the Declaration of Independence[iii]. Foster was born in Lawrenceville, Pennsylvania to parents William Barclay Foster and Eliza Clayland Foster[iv]. He had three sisters, Charlotte Susanna, Ann Eliza, and Henrietta, and four brothers, James, Dunning McNair, Morrison, and WIlliam[v]. Foster’s father was a seller of land and an aspiring socialite in the town.

However, he had a drinking problem which ruined his career as well as his family’s lifestyle[vi]. Because of his father’s failed business and personal problems, the family was forced to move away from their “idyllic residence situated on a bluff overlooking the river” (Tomaschewski) in 1830. Stephen was four at the time.

This event, along with his father’s drinking habits, had a huge impact on Foster. Losing his childhood home and feeling neglected by his father forced Stephen to “escape into a fantasy world” (Tomaschewski).

This led to him seeking enjoyment and enlightenment in the company of poets and journalists[vii]. In the same vein, Foster found enjoyment in reading; mostly the works of Charles Dickens. In particular, he was impressed with Dickens’ novel Hard Times which dealt with the “industrialization and the technological progress” of America which presented the “danger that the individual becomes a sacrifice of the superficiality” (Tomaschewski). This notion drove Stephen to distinguish himself as a unique musician and songwriter but, ironically, became the case for him later in his life.

Another escape for young Stephen was playing instruments, which was commonplace in the Foster household. As a boy, “Stephen was entrusted early with the music of Thomas Moore and Robert Burns, both of whom were representatives of the romantic” and the “nostalgic melancholy of the Irish poet Thomas Moore held an immediate appeal for Foster.” (Tomaschewski) This played a major role in the development of his musical tastes and, later, the music he wrote. His first published song, titled “Open Thy Lattice Love”, was a ballad that he “dedicated to his friend Susan Pentland from Allegheny” in 1844 when he was only 18[viii]. Foster wrote the music for the piece and used a poem by George Pope Morris for the lyrics[ix]. Morris had written the lyrics “in the tradition of the romantic ballad for many popular songs […] which Foster would later make so much his own.” (Tomaschewski)

In addition to “Open Thy Lattice Love”, Foster’s first ballads and waltzes were written between 1893 and 1846. Foster wrote his first composition, “The Tioga Waltz”, in 1839 but it was not published until 1896; 32 years after his death[x]. In the first recorded public performance of this piece (April 1, 1841) Stephen played flute, along with two other student flutists and a student pianist, in a Presbyterian Church at Athens, Pennsylvania[xi]. Foster wrote one of his more known ballads, titled “There’s A Good Time Coming”, in 1846[xii] as well as a waltz titled “Autumn Waltz” in the same year[xiii]. However, he would gain greater attention two years later with a song written for a popular spectacle at the time; the minstrel show.

The minstrel show comprised of middle-class white men painting their faces black (the term used was “blackface”) and dressing like caricatures of African-American men. In these personas, the white men would talk and sing with stereotypical African-American accents and dialects. Today, it is seen as a tremendously racist and ignorant pastime for entertainers and spectators to have engaged in, but at the time it was completely acceptable and widely enjoyed. It was also a major platform for songwriters to gain attention and acclaim.

In 1848, Foster wrote the famous American tune “Oh! Susanna”, a minstrel song that gained instant popularity. Even though Foster wrote some of the most well known minstrel songs, including “Camptown Races” (1850) and “The Glendy Burk” (1860), he “avoided the typical racialist tones.” (Tomaschewski) The Center for American Music at the University of Pittsburgh adequately notes Foster’s sentiment on the matter:

Rather than writing nostalgically for an old South […] or trivializing the hardships of slavery, Foster sought to humanize the characters in his songs, to have them care for one another, and to convey a sense that all people– regardless of their ethnic identities or social and economic class– share the same longings and needs for family and home. He instructed white performers of his songs not to mock slaves but to get their audiences to feel compassion for them. Foster is also know to have said that he wished to “build up taste…among refined people by making words suitable to their taste, instead of the trashy and really offensive words which belong to some songs of that order.”[xiv] It is because of this element in his minstrel songs that they are still popular and well-known in America today. An example of his lasting imprint, one of his minstrel songs, “My Old Kentucky Home”, is now the official state song of Kentucky.

Foster married Jane McDowell in 1850 toward the end of his commercial success[xv]. This marked the beginning of a dark time for Foster. In 1853, he and his wife were temporarily separated and his good friend Charles Shiras died and in 1855 both of his parents died; his song “Hard Times Come Again No More” (1855) is likely a reflection of these events.[xvi] To make matters worse, Foster’s “contracts with his publisher had ended, and he had sold all future rights to his songs to pay his debts.”[xvii] However, he continued to write minstrel songs in varying styles. Some of his better known songs are ballads he wrote during this time, such as “Old Folks at Home [Swanee River]” (1851), “Old Dog Tray” (1853), “Jeanie With the Light Brown Hair” (1854) and “Old Black Joe” (1860)[xviii].

During the American Civil War Foster’s writing style changed dramatically. This was because “nobody else was interested in Foster’s romantic dreamings” and “the spirit of the time needed other songs.” (Tomaschewski) So, he turned his songwriting into a platform to express his feelings about the war. More than anything, Foster focused on the vast amount of death during the war. Some of his songs espousing the negative impact of war included “Was My Brother In The Battle?” (1862), “When This Dreadful War Is Ended” (1862), “Willie Has Gone To The War” (1863), and “My Boy Is Coming Home From The War” (1863)[xix].

It is interesting that during a time when many composers were writing songs to rally the two sides to fight harder and win, Foster was focusing on pointing out the atrocities of war. However, it is not to say that Foster did not write songs that solely condemned the war effort. In 1862 he wrote “We’ve A Million In The Field” about the fortitude of the Union army as well as “We Are Coming, Father Abra’am, 300,000 More” about the members of the Union putting everything aside to go fight in the war. This is also a connotation to African-Americans heeding Lincoln’s “call” (the Emancipation Proclamation) to join the fight for the Union.

Toward the end of his life, Foster was writing music to avoid poverty. For instance, he wrote “a group of Sunday school songs and hymns for song books published by Horace Waters” which included the songs “Give Us This Day Our Daily Bread” and “We’ll Still Keep Marching On.”[xx] However, small paying jobs like this could not support Foster’s lifestyle. He died on January 13, 1864 as a malnourished, poor, and depressed alcoholic[xxi]. He left behind little to no assets nor a legacy that adequately represented his contribution to society. By the end of his life, Foster had written 286 works[xxii].

Though Stephen Foster wrote arguably the most popular American songs ever, he was not widely known during his lifetime and nor is he presently. This is, in part, due to the fact that “he did not perform music professionally, as most songwriters did to support themselves.”[xxiii] His songs were, and still are, often called folk songs, thus implying a lack of ownership. For example, during the Gold Rush, the tune to “Oh! Susanna” was used by the Forty-niners who changed the lyrics to suit their current situation[xxiv].

Foster was not only shunned of his deserved credit for writing the songs; he also did not receive proper compensation. During his lifetime, he only made money from the sheet-music scales he sold which totaled $15,091.08[xxv]. Where Foster would have made a lot of money was in performing rights. However, at the time there was no real way to track who was playing music without the rights to it. Because of this, Foster earned “almost nothing in performing rights.”[xxvi] His wife and daughter later earned $4,199 in royalties, which amounted Foster’s total royalties to $19,290; by today’s standards, his royalties would be worth millions[xxvii].

Stephen Foster is the father of American songwriting. He paved the way for a songwriting profession by devoting his life to creating music for our country. Though he did not receive due credit during his lifetime, the sheer amount of people who used his songs and/or melodies is proof in itself that his music had a quality that everyone could relate to. In the fledgling country that America was, Foster played an integral role in developing the nation’s identity.

“Stephen Foster.” The Center For American Music at the University of Pittsburgh.
Web. 14 Oct. 2012. . 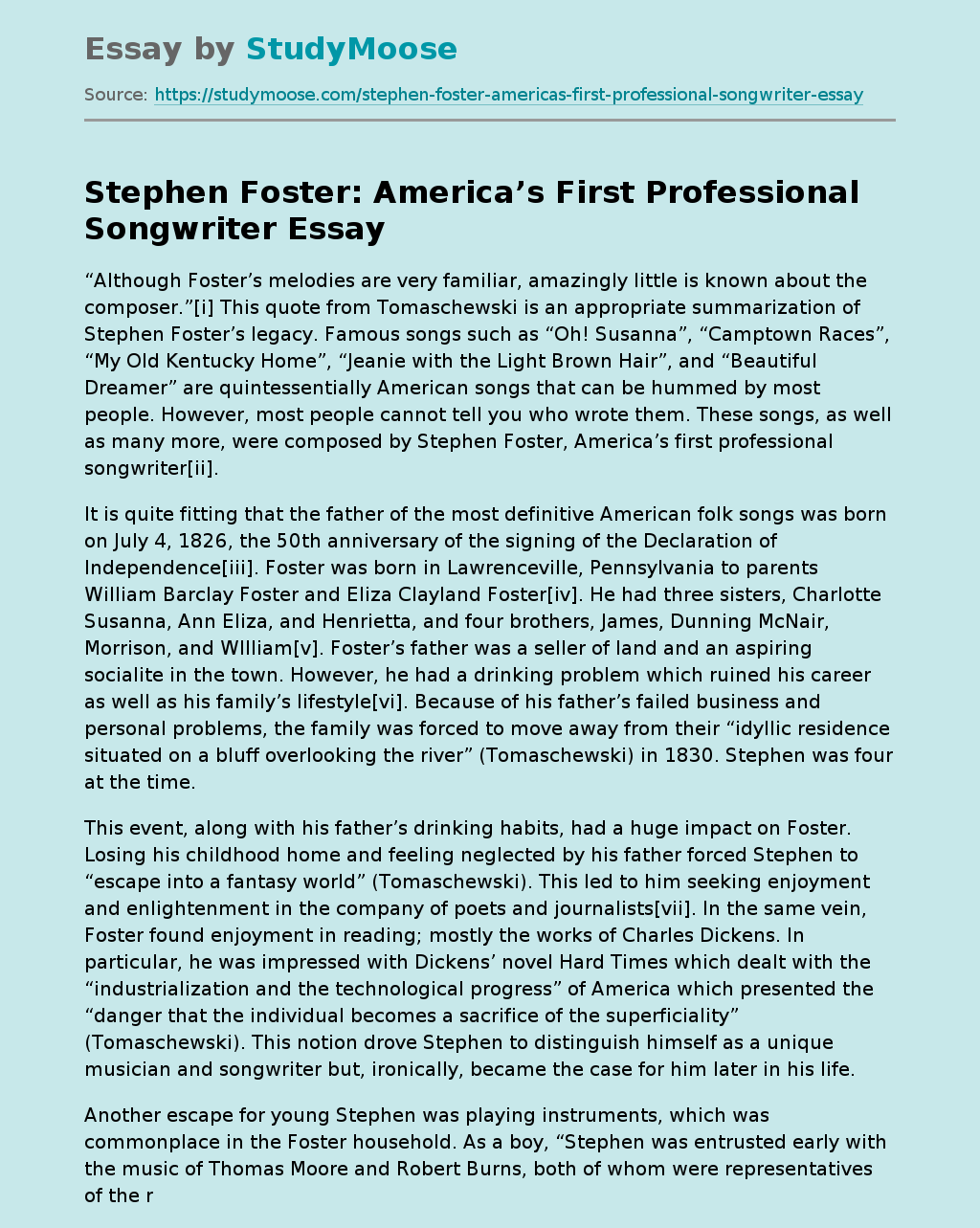