“Good People” by David Foster Wallace is a short story based on a Christian couple challenged to make a tough decision. Christianity and their morals will have a huge impact based on the decision the couple is trying to make.

It is easy to say religion is a big theme in this story because the main characters, Lane and his girlfriend are both Christians and even met at a church event. “They’d gone to different high schools but the same junior college, where they had met in campus ministries.

Turn in your highest-quality paper
Get a qualified writer to help you with
“ Analysis of ”Good People” by David Foster Wallace ”
Get high-quality paper
NEW! AI matching with writer

” They find out they are pregnant, which would leave them with very tough decisions to make because as a Christian, premarital sex is avoided. But the young couple also talks about abortion which is also a big thing most Christians are against. But while they are faced with this tough decision, love is also a big part of this story. Christianity pushes on people about loving your neighbors because we all make mistakes.

Lane tells his girlfriend that he loves her; just not in the romantic way. This could be true or he could also be in denial about getting his girlfriend pregnant and not wanting to take responsibility in his own actions. He says in the story, “He could have almost visualized himself tiptoeing past something explosive.” He was thinking about ignoring the problem and hoping it would go away on its own. “He was looking over past her at the tree in the water. But he could not say he did: it was not true.

Lane is only nineteen, and obviously he is not ready to be a father and have a family, but based on the morals of being a Christian it can seem that he really doesn’t have any other choice. Decisions like this this should take a lot of thought and shouldn’t have all the religious pressure on him to do the right thing. He prayed to God and the story even mention, “He promised God he had learned his lesson.” Their is a lot of pressure on Lane because of their religion and not wanting to make the bad or wrong decision.

Lane being only nineteen in age, we see he comes through with many thoughts of what he should do. He first is completely shocked and tries to find the right decision based on his religion and what the church says he should do. He told his girlfriend that he would be there for her. “One thing Lane Dean did was reassure her again that he’d go with her and be there for her. It was one of the few safe things he could really say.” Then he thinks about all his personal reasons. He thinks about avoiding his religion morals, and ends up coming in denial of the pregnancy of his girlfriend and not wanting to take responsibility. He still doesn’t know what he wants to do because of all the things he is putting into conclusion about this situation.

This story has multiple symbols for example what I talked about before, love, religion, and lane not being ready for a family because he was only nineteen years old. I think when Wallace was writing this short story, I think he was trying to get a point across. I think that point was that no matter what situation that you are put through, it’s important to make your own decision, even when you have religion and values that put you to the test. “He was not a hypocrite, just broken and split like all men.” All humans have struggles and make mistakes, it’s the way you handle the situation.

Analysis of ”Good People” by David Foster Wallace, 2007 The short story is set at a park by a lake. “They were up on a picnic table at that park by the lake, by the edge of the lake, with part of a downed tree in the shallows half hidden by the bank.” The downed tree sets the mood to be sad and dark. We also learn that the main characters Lane A. Dean, Jr. and his girlfriend Sheri Fisher are sitting very still on the picnic table, which tells us that the atmosphere is quite intense. It does not say for how long they sit by the lake, but it says that the right sides of their faces get shaded so it can be assumed that they sit there for a while. One of the main characters is Lane A. Dean, Jr., who is 19 years old and studies accounting and business. Lane is a very reflective person because he reflects a lot on how he is and how he thinks he should be. “He knew it was wrong, knew something was required of him that was not this terrible frozen care and caution, but he pretended to himself he did not know what it was that was required.” This shows that he is a conscientious person and that he has high expectations for himself.

Through the whole short story thoughts like the mentioned quote are seen. It seems like Lane is not satisfied with the way he is and keeps comparing himself to his girlfriend, Sheri. “He was starting to believe that he might not be serious in his faith. He was desperate to be good people, to still be able to feel he was good.”The fact that he is moving away from his faith makes him question whether he is a good person or not. It makes him confused about his identity, about who he is. Lane is also confused when it comes to his love for his girlfriend and that could be the reason why they are not happy sitting together. Lane’s girlfriend, Sheri, is 20 years old, studies to become a nurse and has a hosting job. She is very serious in her faith and values and she is a girl who knows what she wants.So Sheri seems more secure than Lane and more comfortable in her own skin. In a way Sheri is more mature. But she also sits very still: “She was blank and hidden.” It is shown that Sheri is not happy because she sits with her face in her hands. So it can be concluded that they may have a problem with each other. It is a third person narrative.

The narrator has an obvious focus on Lane and this we see because the narrator only includes Lane’s thoughts and feelings a lot: “Sometimes when alone and thinking or struggling to turn matter over to Jesus Christ in prayer, he would find himself (…)” “He could almost visualize himself tiptoeing past something explosive.” Therefore the narrator has an inner view of Lane. We learn his opinions, and especially when Sheri is described – you learn that it is through Lane that she is described. The effect of the inner view is that we only learn how one of the main characters is feeling and is thinking. It also makes the information about Sheri subjective because it is Lane’s opinion about her and not her exact thoughts or feelings. We only have Lane’s opinion and actions and Sheri’s actions. Furthermore the short story is written in the past tense, and there are some flashbacks: “Two days before (…)”Sometimes when they had prayed (…)” The flashbacks can enlighten the reader about the main characters background, but also confuse the reader. The short story consists of both short sentences and long sentences. The sentences are short when something dramatic happens and the short sentences make it more dramatic and interesting to read and it also speeds up the reading pace.

For example when Lane describes the battle within himself: “Two hearted, a hypocrite to yourself either way.” There is no direct speech, which makes it harder for the reader to interpret the characters because the writer influences the readers. The writer is presenting an interpretation of the characters’ speech and not their exact words. There is a focus on actions so there is a lot of verbs and also adjectives, especially in the beginning. There are some difficult words, but all in all the vocabulary is standard level. The main conflict is the conflict between Lane and Sheri. First of all both of them sit very still and we hear a lot of Lane’s thoughts – as if they are not talking to each other. “It was of two great and terrible armies within himself, opposed and facing each other, silent. There would be battle but no victor.” The battle inside of Lane could represent the battle between Sheri and him. You might say that they have a problem when it comes to communicating with each other.

The conflict is that Lane does not love Sheri. “(…) at the decision together did not ever include it – the word – for had he once said it, avowed that he did love her, loved Sheri Fisher, then it all would have been transformed.”18 “But neither did he ever open up and tell her straight out he did not love her.” Lane expresses that if he had loved her or said to her that he loved her, they would not have this conflict. The conflict is that Lane is not honest with Sheri about his true feelings and this leads to the unhappy and tense atmosphere. The reason why Sheri does not say anything could be because she is waiting for Lane to come clean and be honest. At the ending of the story Lane imagines what he wants Sheri to say when he tells her the truth – that he does not love her. Lane wants Sheri to say that it is all right and that she wants the best for him. Lane has been praying for love and at the end he comes to realize that he has been praying for the wrong thing. He should have been praying for courage – courage to tell Sheri the truth. The title “Good People” refers to the fact that Lane wants to be a good person by being honest with Sheri.

It also refers to when Lane says that he is not that serious in his faith and that he wants to be good people, to feel that he was good. Lane does not want to lie to her or to himself. To be good is something every human being aspires to be. To be good, kind and loving to your family, friends and neighbours is something preached by the Christian church, but it is also how people generally want to be in spite of their religion. Lane finds out at the very end that he is not that serious in his faith, but that he is still able to be good by finding the courage to be honest with Sheri. 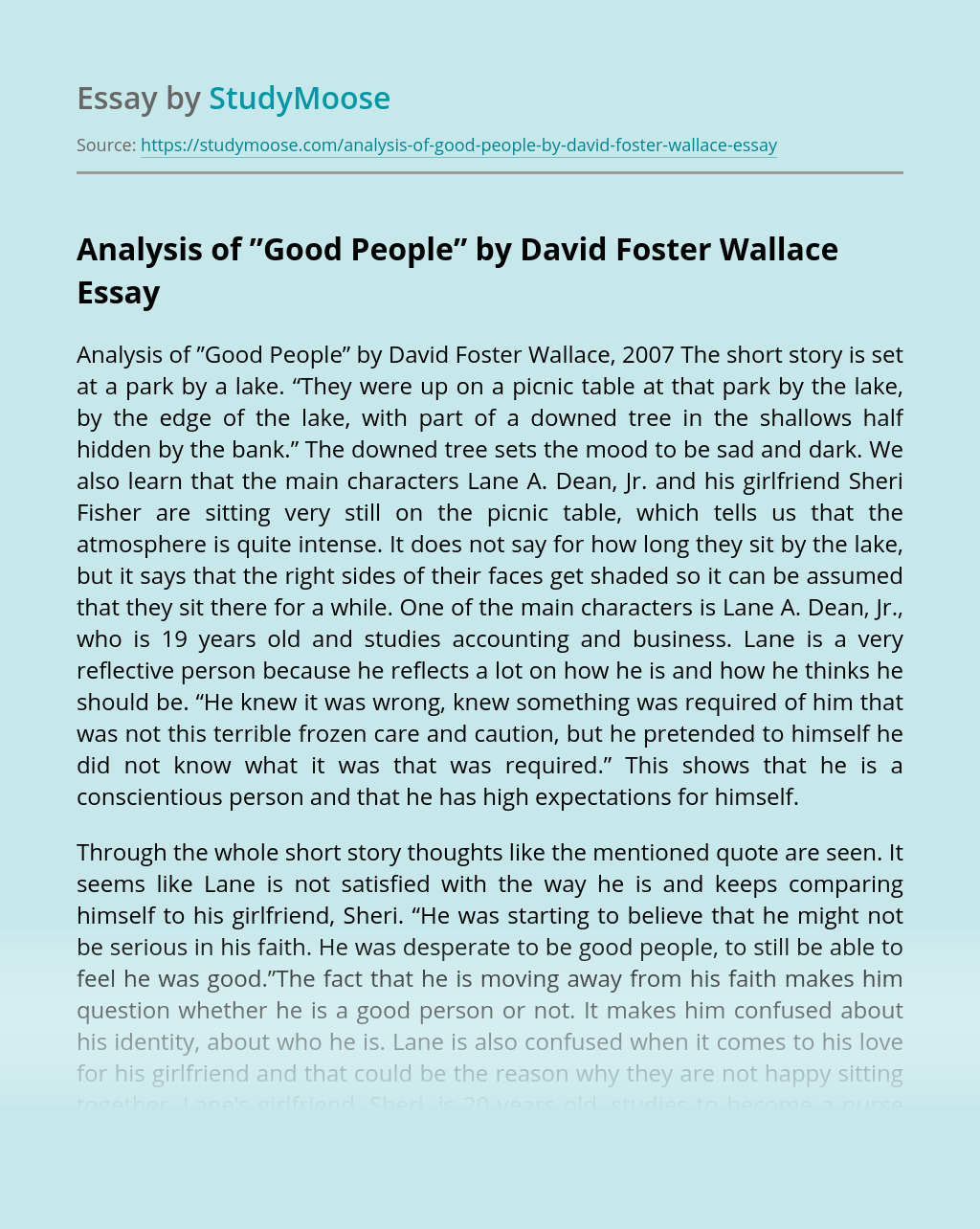 Turn in your highest-quality paper
Get a qualified writer to help you with
“ Analysis of ”Good People” by David Foster Wallace ”
Get high-quality paper
Helping students since 2015
Stay Safe, Stay Original