“It’s a bird, it’s a plane, no its Superman! ” For decades comic book characters such as Superman, The Incredible Hulk, Batman, and Wonder Woman have captured the imaginations of American children and adults alike. “Superheroes,” they have been coined. But these figures only exist in our imaginations. Batman is not really there to save us from villains such as the Joker and the Riddler. Because these heroes are fictional, we are left without real life heroes… or are we? The answer is clearly no.

Heroes are all around us.

They can be courageous, intelligent, strong or daring, but heroes to me are selfless and brave. To begin with, heroes are selfless. In “Love Triumphs,” Deamonte shows selflessness by gathering all the children and leading them to safety instead of just saving himself. In “October Sky,” Homer show selflessness by dropping out of school to work in the mine after his father got hurt so he could support his family and have his older brother keep his football scholarship.

Although those are astonishing acts of selflessness, my neighbors Mike and Elizabeth Flach outshine them both.

They have adopted eight foster children from all over the world and each one was in a different situation. Maila, their adopted daughter from China, was found abandoned on a street corner in Guiyang, Guizhu when she was only ten days old. Demetrius and Antoine, their adopted sons from Detroit, Michigan, were neglected by their mother and left to provide for themselves at only nine and twelve years old.

Mike and Elizabeth are selfless because they take children who deserve good homes into their custody, and provide them with care, shelter, love, security, and a sense of well-being.

They devote their time to raising these children, even though they are not biologically theirs and many come from broken homes, proving not easy to handle. In addition to being selfless, heroes are also brave. In “The Odyssey,” Odysseus shows bravery by stabbing the Cyclopes’ eye and in “An Everyday Hero,” Ana shows that she is brave because she fights cancer every moment of everyday and does it with a smile. One person with remarkable bravery is Dr. Martin Luther King Jr. He was especially, because he was brave in an extreme situation and acted anyway; knowing that bad things might befall him, because he knew it had to be done.

Dr. King lived in a place and time when speaking out against racism was dangerous and deadly. He fought on even after his own home was firebombed. This shows his extreme bravery and the only conceivable reason for him continuing was because he knew it had to be done. In short, a hero is not a selfish coward. They would give up anything for people they have never even met before and ask for nothing in return. Also, they would face their most terrifying fears and fight back because someone has to do it. Heroes are all around us, you just have to look a little harder to find them. 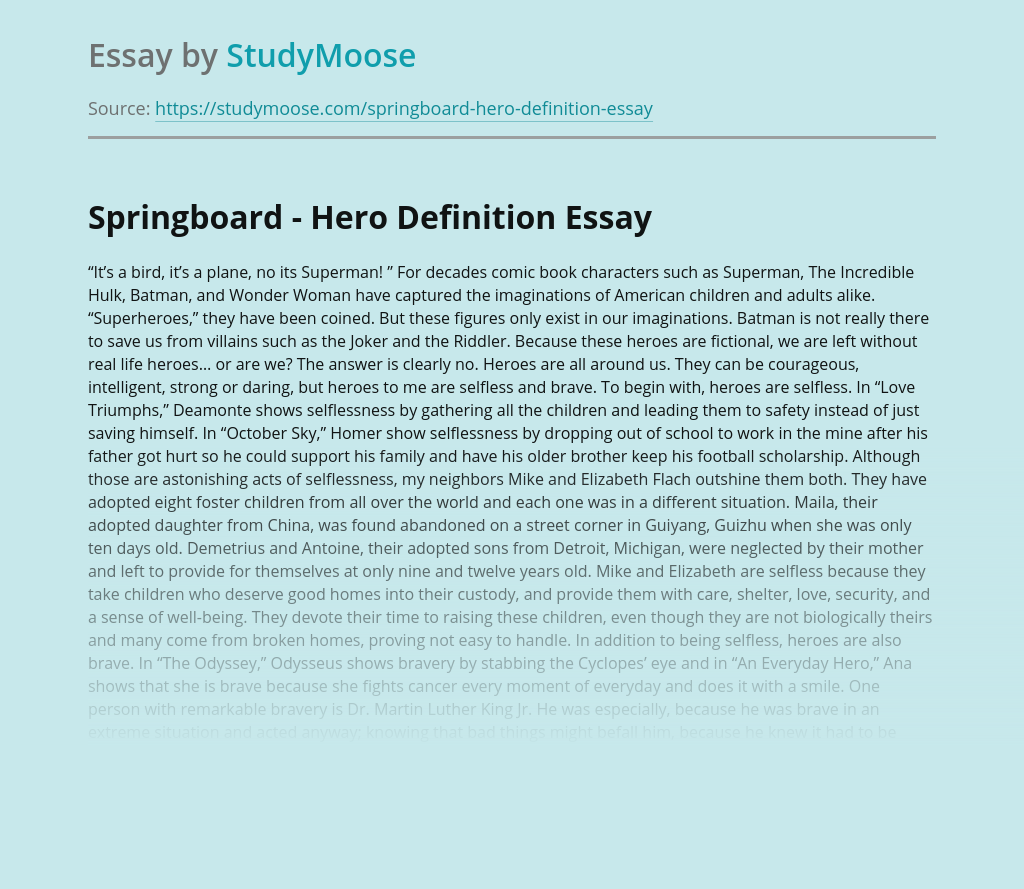