Southwestern University (SWU), a large state college in Stephenville, Texas, 30 miles south of the Dallas/Fort Worth metroplex, enrolls close to 20,000 students. To bolster its chances of reaching number-one ranking in the Big Eleven Conference, in 2003, SWU hired the legendary Pitterno as its head coach. One of Pitterno’s demands on joining SWU had been a new stadium. After the 6 months of SWU administrators’ study, Dr. Joel Wisner, president of SWU, had reached a decision to expand the capacity at its on-campus stadium.

Turn in your highest-quality paper
Get a qualified writer to help you with
“ Southwestern University (a) Case Analysis ”
Get high-quality paper
NEW! AI matching with writer

The contractor, Hill Construction (Bob Hill) was given a 270 days deadline for the project. There will be a contract penalty of $10,000 per day for running late. Hill again reviewed the data and noted that the optimistic time estimates can be used as crash times. He gathered his foremen and told them, “Folks, if we’re not 75% sure we’ll finish this stadium in less than 270 days, I want this project crashed! Give me the cost figures for a target date of 250 days— also for 240 days.

I want to be early, not just on time!”Problem:

• Do not miss the deadline.
-Avoid the contract penalty of $10,000 per day.
-Maintain the good reputation of Hill Construction.
Point of View: Hill construction (Bob Hill), the contractor of the project.

Time Frame: 2009- 2010 (Construction would immediately start after 2009 season ended, which would allow exactly 270 days until the 2010 season football opening game.)

Alternative 1:Hill won’t crash the project.
Pros: a) The expected time to finish the entire project (260 days) is still less than the target date (270 days), and yields a good probability of finishing the project in 270 days (71.23%).
b) There is only one critical path, meaning, less activities will delay the project if they will run late.
c) Hill construction won’t need to add costs to its operations. Cons:a) The probability of finishing the project in 270 days is just 71.23%, this is less than the desired 75%.
b) This alternative is 28.77% risky.

Pros:a) Shortened activity durations will enable Hill to finish the project by the due date.
b) If missing it is about missing the deadline, this would be the least risky alternative. Cons:
a) There will be an additional cost of $34,000.
b) There will be a new critical path, meaning, all activities may delay the project if they will run late. 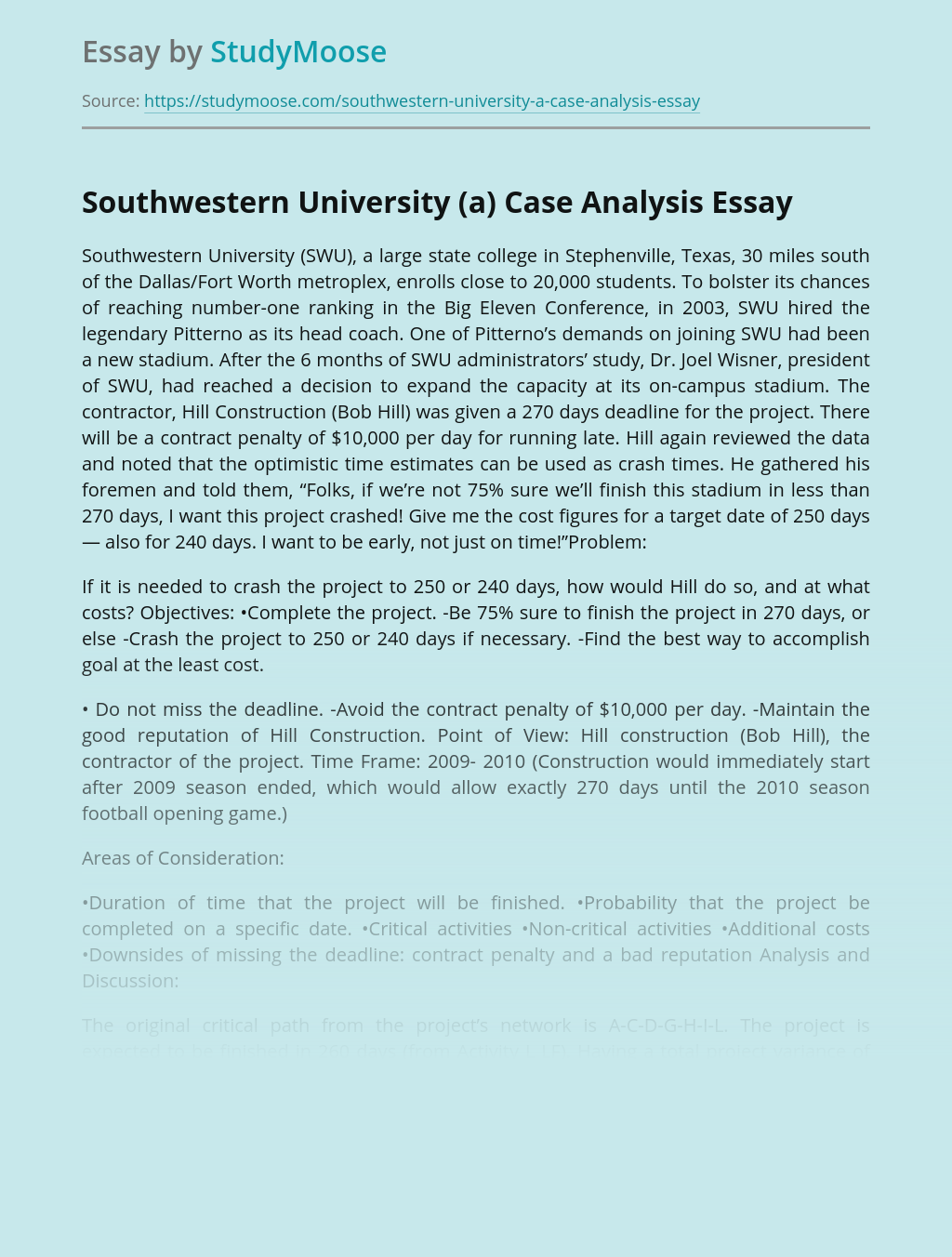 Turn in your highest-quality paper
Get a qualified writer to help you with
“ Southwestern University (a) Case Analysis ”
Get high-quality paper
Helping students since 2015
Stay Safe, Stay Original