Societal Issues in “The Pearl”

Introduction/background of Steinbeck and the Pearl

Literature is called a mirror to society. The writer cannot escape himself from societal issues and influence. He has to accept the impact in one-way or the other. John Steinbeck’s “The Pearl” is also no exception. His characters, plot, action, style and themes all reveal some societal perspectives in explicit or implicit language.

The Pearl by John Steinbeck seems like a very simple book as a parable on the societal issues. The story is about a poor man whose new found riches take over his life.

Turn in your highest-quality paper
Get a qualified writer to help you with
“ Societal Issues in “The Pearl” ”
Get high-quality paper
NEW! AI matching with writer

It’s a story we’ve all heard before, but as you dig deeper into the meaning of the book one finds much more than just a simple story. Discoveries such as how man relates with nature, the different social statuses, and the wholeness of people can be found in this simple story.

Kino is a poor Indian man with a small family, a wife and an infant son.

He is an honest, venerable pearl diver who works hard to maintain his family’s livings. Kino is aware of his poverty and knows that money could possibly buy a better life for his family, especially his son. When he finally gains riches he realizes that people can kill to protect their chance for wealth and power. He also has a better grasp on the social standing of the Indians compared to the white men. He senses danger once everyone has found out about his riches, but his guard is always up.

Now that his life has monetary value, Kino has lost all social innocence. He learns that he, too, can kill to protect the chance for wealth and power.

Kino is the symbol of a hard-working man destroyed by greed. Kino not only destroys his life, but he destroys his wife’s and son’s life as well. Juana, his wife, is a very devoted wife. She also has very maternal and logical instincts. When the doctor would not treat their son, Kino responds by punching a gate; Juana puts seaweed poultice on the baby’s shoulder.

When Juana felt that the pearl was destroying their life she tried to throw it into the see. Juana represents the simple way of life. Unlike Kino, Juana does not believe in pursuing the unattainable. Though their son Coyotito does not seem to play an important part, he really does represent a big issue. Coyotito is the innocent victim of powers greater than himself. He represents the person (or thing) that is forced to stand back and cannot defend him at all in life.

The Pearl as a Parable

The Pearl is basically a Mexican folklore. Although, The Pearl is purely more than a clear-cut story of a man who finds a pearl, yet it has many connotative, allegorical and suggestive touches from parable perspective. In its own, The Pearl is a dominant parable of jealously, oppression, inner struggle, bravery and greed and so much more. It may be termed as a multiple metaphor also going beyond the realm of parable rather. From fabrication of plot perspective, Steinbeck vigilantly weaves into his folk tale his own innovative and individual style using glowing descriptions and strong figurative language.

How does The Pearl address the role of society?

There are many prominent themes in this book, but the one I really like and agree with is not so prominent. In The Pearl Steinbeck shows the role of the society being as one. Everything has its place in the universe, and when something happens to one of the parts, the whole system is affected. No event happens to an individual in isolation. The first incident in which you see this take affect is when Kino is heading to the doctor’s house. The villagers swarm around him as they head into the rich part of town. ‘The thing had become a neighborhood affair.’ (Page 8) Everyone was concerned. When Kino found the pearl everyone knew about it by the time his boat reached the shore. How people are affected as a whole is not always in a negative sense.

These two examples demonstrate that, but unfortunately these are the only two examples. There is much more pain and suffering form here on. None of the Indians have ever been rich, so when Kino finds the pearl many of the other Indians feel resentment toward him. This is not obvious to Kino because he is blinded by greed, but his brother Juan Thomas sees it and warns Kino.

Juan Thomas is much help to Kino. Because of Kino’s mistakes in the book Juan has to rearrange his traditional Indian lifestyle to compensate for his brother. His life is temporarily changed because of one person, his brother. After trying to sell the pearl to the people in his town, Kino becomes enraged. There are a number of dreadful events that happen between the time he sells his pearl and the time he leaves town that Kino does not act rationally upon. This affects everyone. It affects the ones he deals directly with physically, but the others in town are affected emotional.

How does The Pearl address the role of equality?

The characters in The Pearl represent exploitations and insist social justice and equality in an implicit manner. One reason Kino feels he must sell the pearl is because the return money from pearl will raise his social class. Kino lives with his family in a poor person’s village made of brush houses. He, his family, and village are at the bottom of the social structure in La Paz. When Kino and Juana’s baby, Coyotito, is stung by a deadly scorpion the family has to walk all the way to the doctor (when dealing with white people the doctor goes to the people instead of the people going to the doctor) with the with the sick baby to find out he will not care for Coyotito. The doctor tells his servant that he’s not a vet implying that Kino and his family are animals.

Then the servant lies to Kino and Juana telling them that the doctor is on a call. After that, Kino tries to sell his pearl to three different dealers that all lie to him, telling him that his pearl is valueless and is worth no more than 1500 pesos, when the pearl is really worth about 50,000 pesos. Ultimately those dealers try to cheat Kino into selling the pearl for 33 times less than it is really worth! Three different occasions in The Pearl people try to kill Kino for his pearl during the night. They never succeed but his boat and house are destroyed in the process. The main reason Kino does not want to be oppressed is so he won’t be cheated and disrespected anymore than he already is

How was Steinbeck as an advocate for social reform?

Despite Juana’s legitimate concerns Kino feels he must sell the pearl for a fair price, why? Because the return money from the pearl will raise his social class and give Kino and his family a chance in life. That chance will also tell the arrogant whites that they aren’t the only ones who can be successful.

The reason whites don’t want other races to be higher in social class is because they feel their success and class is being threatened. So they discriminate, disrespect, and abuse other races that threaten that class. Whites especially should learn to give other races a chance and hopefully they will learn that they are not the only ones that are or can be successful. If whites in The Pearl had learned this Kino wouldn’t have had to go through all his dangerous, scary and unfair trouble and in the process lose one of his only loves, Coyotito, his baby boy.

The second reason Kino feels he needs to sell the pearl is because the return money will give he and his family a chance in life. As mentioned before Kino and his family live in a poor village. Natives of this village (La Paz) make an extremely small amount of money by finding pearls and selling them to dealers. Most villagers are uneducated, have ragged clothes, an old harpoon, an ancient boat and brush house and of course a family.

Societal Issues in “The Pearl”. (2021, Mar 28). Retrieved from https://studymoose.com/societal-issues-in-the-pearl-essay 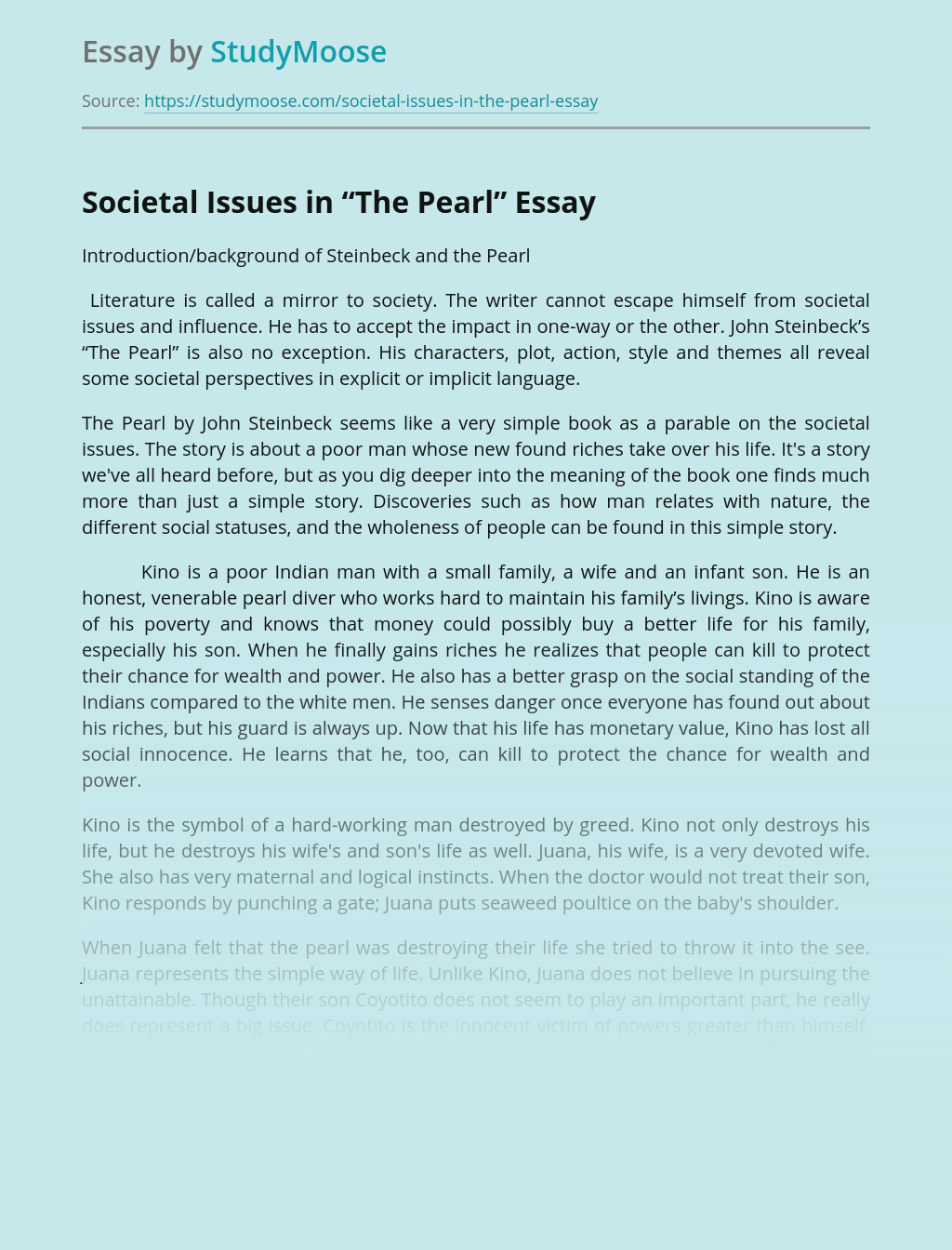 Turn in your highest-quality paper
Get a qualified writer to help you with
“ Societal Issues in “The Pearl” ”
Get high-quality paper
Helping students since 2015
Stay Safe, Stay Original