Pirates of the Caribbean: The Curse of the Black Pearl

The book Pirates of the Caribbean, written by Irene Trimble is about the legend of a pirate ship called the Black Pearl its curse and the crews that fight for it. Jack Sparrow was once captain of the Black Pearl but now Barbossa is the captain. Jack and Will Turner are on a mission to take over the black pearl and save Elizabeth from Barbossa and his crew. Barbossa and his pirate crew are cursed. Because of the curse the food they eat turns to ashes in their mouth, they cannot taste their drinks and when they step into the moon light they turn into skeletons.

Turn in your highest-quality paper
Get a qualified writer to help you with
“ Pirates of the Caribbean: The Curse of the Black Pearl ”
Get high-quality paper
NEW! AI matching with writer

“But there is one way to end the curse,’’ Barbossa said raising an eyebrow.

‘’All the scattered pieces of Aztec gold must be restored… and the blood repaid.” (Pg.52) The blood has to be from Bootstrap Bill or his son Will Turner. After all the gold is returned to the cave at Isla de la Muerta and Will’s blood is on the gold the curse is broke and Barbossa and his crew turn back into humans.

Jack shoots Barbossa and he dies because he isn’t a skeleton anymore. In the end Jack escapes from being hung and joins his crew on the Black Pearl and Will and Elizabeth fall in love.

Jack Sparrow is tricky pirate because he steals a ship and when the crew comes aboard to capture him he sneaks onto their ship, which is faster, and steals it. He is also very smart because he and Will put a row boat over their heads and walked under water still breathing.

Jack is humorous because whenever he is asked a question he always answers by saying something funny. Jack is dishonest so nobody really knows what he is planning to do. Will Turner is heroic because he threw a sword under Jack’s feet before getting hung so he didn’t die. He was also a very skilled blacksmith because he made swords and axes.

The most important thing to him was Elizabeth. Will has been in love with her ever since he met her. Elizabeth Swann is attractive and majestic because she always wears fancy expensive clothes and she is also the Governor’s daughter so she is shown a lot of respect. Elizabeth is very curious about pirates and wants to live a pirate life. She was very brave because she was not afraid of the pirates and she helped save Will and Jack from Barbossa and his crew. Barbossa is caring because he is trying to find all of the Aztec gold to help end the curse that is on him and all of his crew. He is gullible because Jack is always lying to him and tricking him.

Barbossa is respected by his crew because they always do what he asks. Two crews were fighting over the Black Pearl. Jack wants it back and Barbossa wants to keep it. Barbossa needs the last piece of Aztec gold to end the curse and Elizabeth has it. His crew takes Elizabeth because they think she is Boot Strap Bill’s daughter and they need his blood to break the curse. Will Turner wants to rescue Elizabeth from Barbossa. Everyone ends up at the cave of Isla de la Muerta where the chest of Aztec gold is. Jack and Barbossa had a sword fight and found out that they are both skeletons.

Will Turner puts his blood on the gold and at the same time Jack shoots Barbossa with his pistol and because Barbossa is human again he bleeds and dies. Jack Sparrow escapes and takes over the Black Pearl again and Will Turner and Elizabeth live happily ever after. I really like this book because I love pirates and it has a lot of action. I like how Jack and Barbossa fight over the Black Pearl. My favorite part was when Jack stabbed Barbossa and nothing happened and then Barbossa stabbed Jack with the same sword and he turned into a skeleton. I would recommend this book to someone that likes pirates and action.

Pirates of the Caribbean: The Curse of the Black Pearl. (2017, Feb 18). Retrieved from https://studymoose.com/pirates-of-the-caribbean-the-curse-of-the-black-pearl-essay 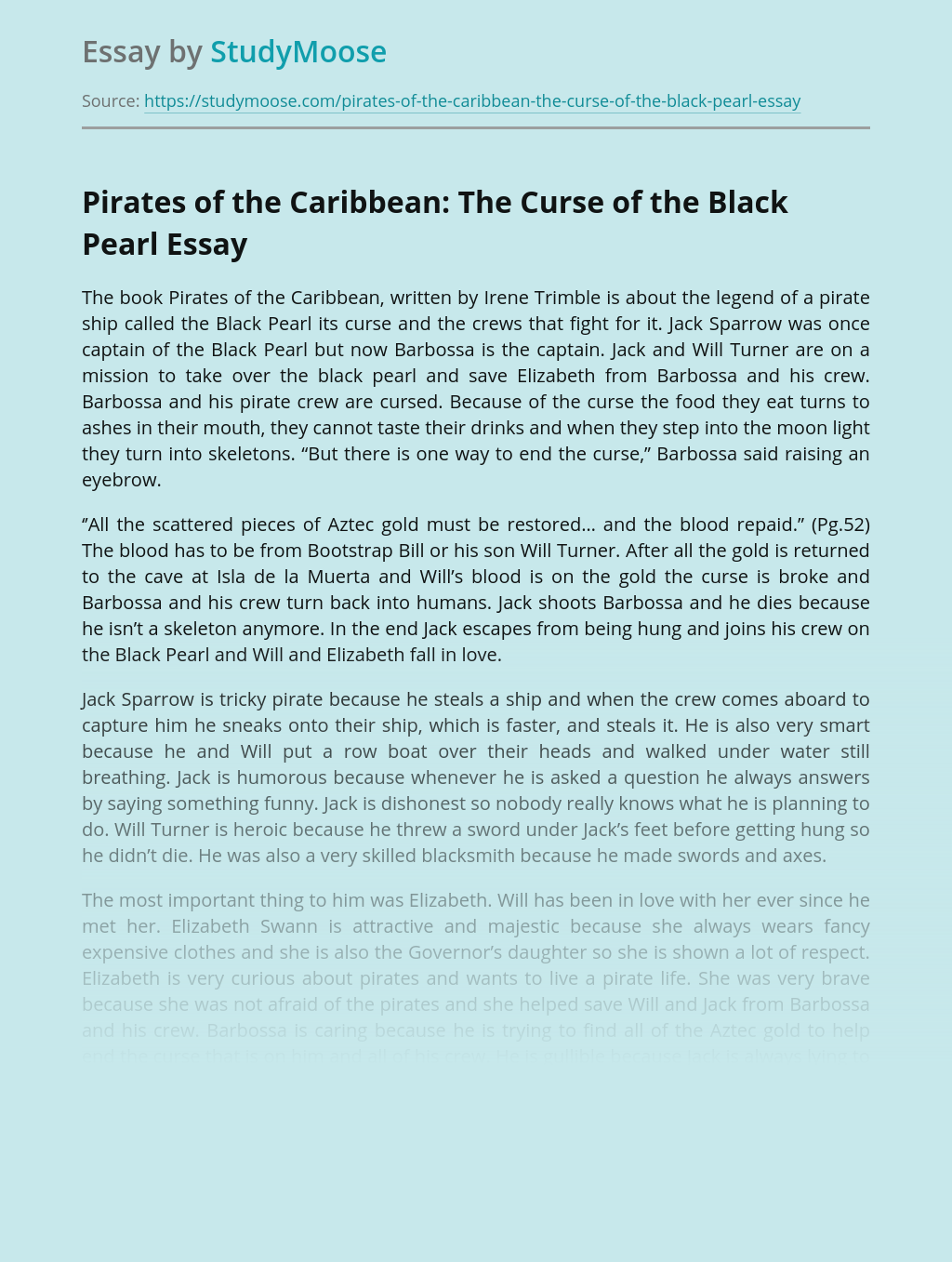 Turn in your highest-quality paper
Get a qualified writer to help you with
“ Pirates of the Caribbean: The Curse of the Black Pearl ”
Get high-quality paper
Helping students since 2015
Stay Safe, Stay Original