Social Psychology and Science: Some Lessons From Solomon Asch

This essay will discuss Asch’s conformity experiment conducted in 1951 specifically in America and some of the critics the experiment has. However, Asch’s (1951) study was aimed at discovering whether or not the majority would influence a minority even in an unambiguous situation. He used the line judgment task, all the participants were shown two cards, one displaying three vertical lines of different sizes and the other displaying only one, and they were asked to match the line on one of the cards to a line on the other card.

Don't use plagiarized sources. Get your custom essay on
“ Social Psychology and Science: Some Lessons From Solomon Asch ”
Get custom paper
NEW! smart matching with writer

Although Asch’s experiment showed conformity there are many criticisms of his experiment which will be discussed in this essay.

Firstly, the term conformity refers to a type of social influence involving a change in belief or behavior in order to fit in with a group. This change is in response to real involving the physical presence of others or imagined which involves the pressure of social norms or expectations group pressure (Longman,1995). Moreover, one of the critics is that Asch used a biased sample of 50 male students from Swarthmore College in America.

Therefore, the results cannot be generalized to other populations, for example, female students, and no conclusion could be drawn on how the female students would confirm similarly like the male students. As a result, Asch’s sample lacks population validity and further research is required to determine whether males and females conform differently (Asch, 1952).

It could be argued also that Asch’s experiment has low levels of ecological validity. Asch’s test of conformity, a line judgment task is an artificial task, which does not reflect conformity in everyday life. Consequently, we are unable to generalize the results of Asch to other real-life situations, such as why people may start smoking or drinking around friends, and therefore these results are limited in their application to everyday life unto an individual. (Asch, 1952).

And finally but not least, Asch’s research is ethically questionable. He broke several ethnical, including deception and protection from harm. Asch deliberately deceived his participants, saying that they were taking part in a vision test and not an experiment on conformity. Although it is seen as unethical to deceive participants, his experiment required deception in order to achieve valid results (Asch, 1956). If the participants were aware of the true aim they would have displayed demand characteristics and acted differently. In addition, Asch’s participants were not protected from psychological harm and many of the participants reporting feeling stressed when they disagreed with the majority. However, Asch interviewed all his participants following the experiment to overcome this issue.

Social Psychology and Science: Some Lessons From Solomon Asch. (2020, Nov 21). Retrieved from http://studymoose.com/social-psychology-and-science-some-lessons-from-solomon-asch-essay 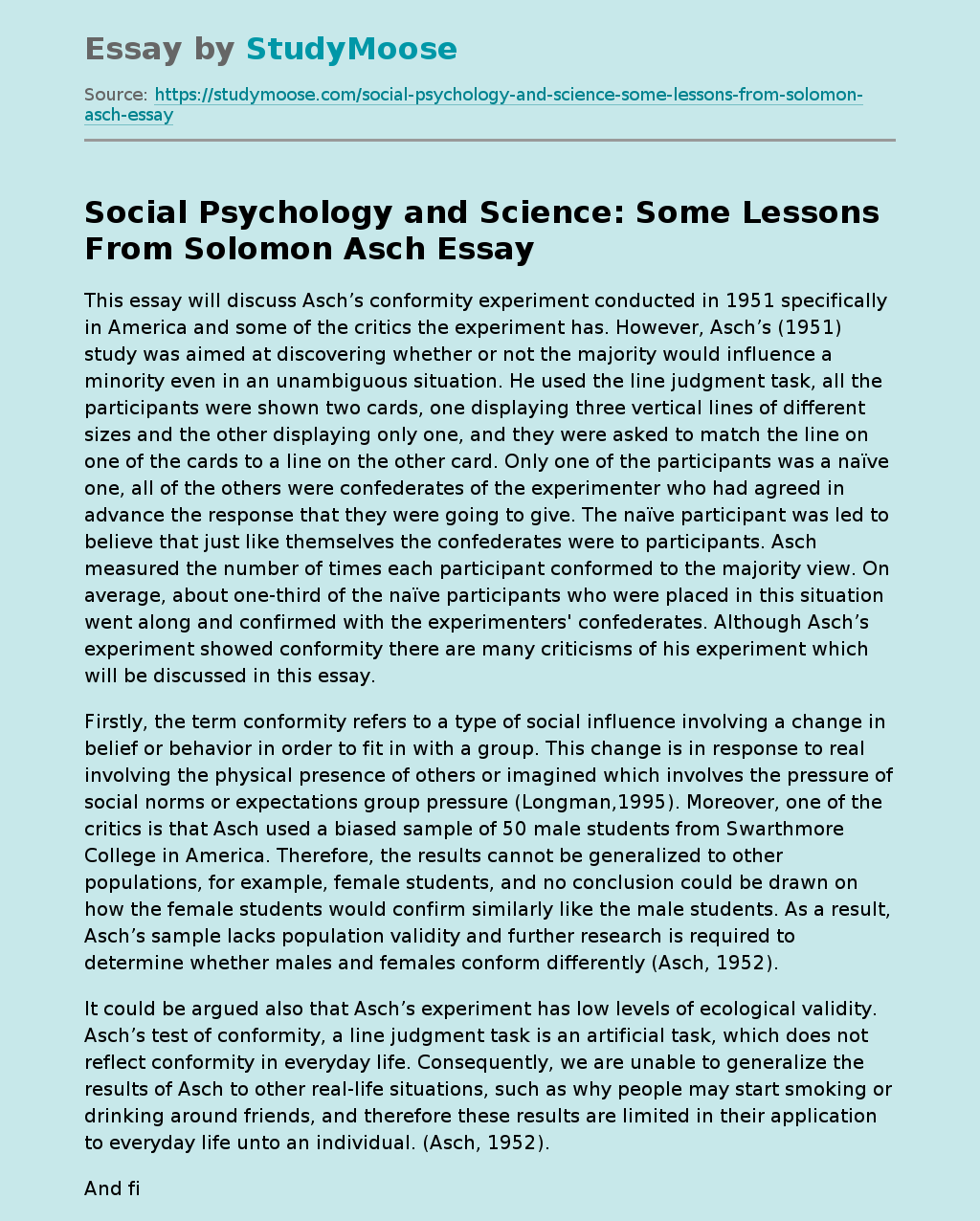