Social Media And Its Negative Effect On Teens

‘For young adults, social media may not be that social after all’ technology makes people feel alone. Social media is making people feel isolated. Time off your phone is healthy and is recommended by many doctors. Face to face interaction is becoming less common. Some people might say that technology is a way for them to overcome their shy personality, but in person face to face interaction in the best way of communication. The technology it’s putting a wedge in face to face relationships.

Don't use plagiarized sources. Get your custom essay on
“ Social Media And Its Negative Effect On Teens  ”
Get custom paper
NEW! smart matching with writer

‘You might watch all these interactions where it seems like everyone else is connecting,’.That could lead to feeling isolated or left out. The image of other people’s seemingly perfect vacations, homes, and lives, even though those are not likely to represent reality, can make you feel like you’re missing out. It’s not that technology is physically removing us from our social encounters, it’s that technology is replacing the person or people from interacting and the people around them.

Spending time in front of a screen is becoming more common. A generation ago, people were concerned about how much television people are watching. Today there are screens everywhere, including the classroom, in the workplace, and even in your pocket. It’s still important, however, to limit the amount of time you spend in front of screens, for many reasons.

First, the more screen time you experience, the more time you spend sitting or lying down, and not really moving your body, this affects the time you spend moving and exercising your body. Decreasing the time moving and exercising increases the chances of you gaining too much excess weight on your body. Extra weight can cause health problems now and in the future. There are many different ways to avoid this problem, one is monitoring your screen usage using an app or a program built into your phone or device.

In a Ted talk given by Sherry Turkle, she mentions an 18-year-old boy who tells her wistfully ‘someday, someday, certainly not now I’d like to learn how to have a conversation.’She goes on to say, What’s Wrong with a conversation?’ they reply with, ‘I’ll tell you what’s wrong with having a conversation. It takes place in real-time, and you can’t control what you’re going to say.’ people now are making texting such a habit when they come in contact with a situation when you speak face to face they struggle to manage a fluent conversation. She goes on to say that’ human relationships are rich and they’re messy and they’re demanding. And we clean them up with technology, and when we do one of the things that can happen is that we sacrifice conversation for mere connection. We short-change ourselves.

And over time we seem to forget this, or we seem to stop caring. I was caught off guard when Stephen Colbert asked me a profound question, a profound question. He said, ‘Don’t all those little tweets, don’t all those little sips of online communication, add up to one big gulp of real conversation?’ My answer was no, this doesn’t add up connecting in sips may work for gathering discrete bits of information, they may work for saying, ‘I’m thinking about you,’ or even for saying, ‘I love you.’I mean, look at how I felt when I got that text from my daughter but they don’t really work for learning about each other for really coming to know and understand each other. And we use conversations with each other to learn how to have conversations with ourselves.’ If using technology is how we rely on meaning and building our relationships, our relationships aren’t built on a strong enough foundation and are maybe not the relationships we would want if we really got to know the person on the other end of the phone.

Some people claim that technology and social media help them portray themselves without their shy personalities intervening. I am here to say that having a true conversation, face to face even if you’re shy help your personality more than texting, tweeting, or posting on social media. In fact, the reason people feel shy it is because they have not experienced enough face-to-face conversations. This can affect your confidence in speaking to others and your ability to say, ‘Get out there and get involved.’ Ways you can avoid being shy is by meeting a new person, starting a conversation, or just a smile. In the simple act of smiling, it can boost your confidence and later in the future lead to meeting a new person. Being shy is hard but hiding behind a phone will only cause more bad than good.

‘Connected, but alone.’ social media and technology have and are causing people to feel alone or isolated. Through social media, we are making ourselves isolated. As Sherry said, ‘You become isolated if you don’t cultivate the capacity for solitude, the ability to be separate to gather yourself.’ Staying on mobile devices and screens can help our health and prevent us from being a couch potato. Some people refer to face to face encounters as difficult or awkward. Interaction in person helps people’s confidence and it helps them overcome their shy personalities. As hard as you try technology cannot replace face to face conversation. Be an example to the future generations, make your impact by not allowing technology to deteriorate your reality.

Social Media And Its Negative Effect On Teens . (2021, Dec 09). Retrieved from https://studymoose.com/social-media-and-its-negative-effect-on-teens-essay 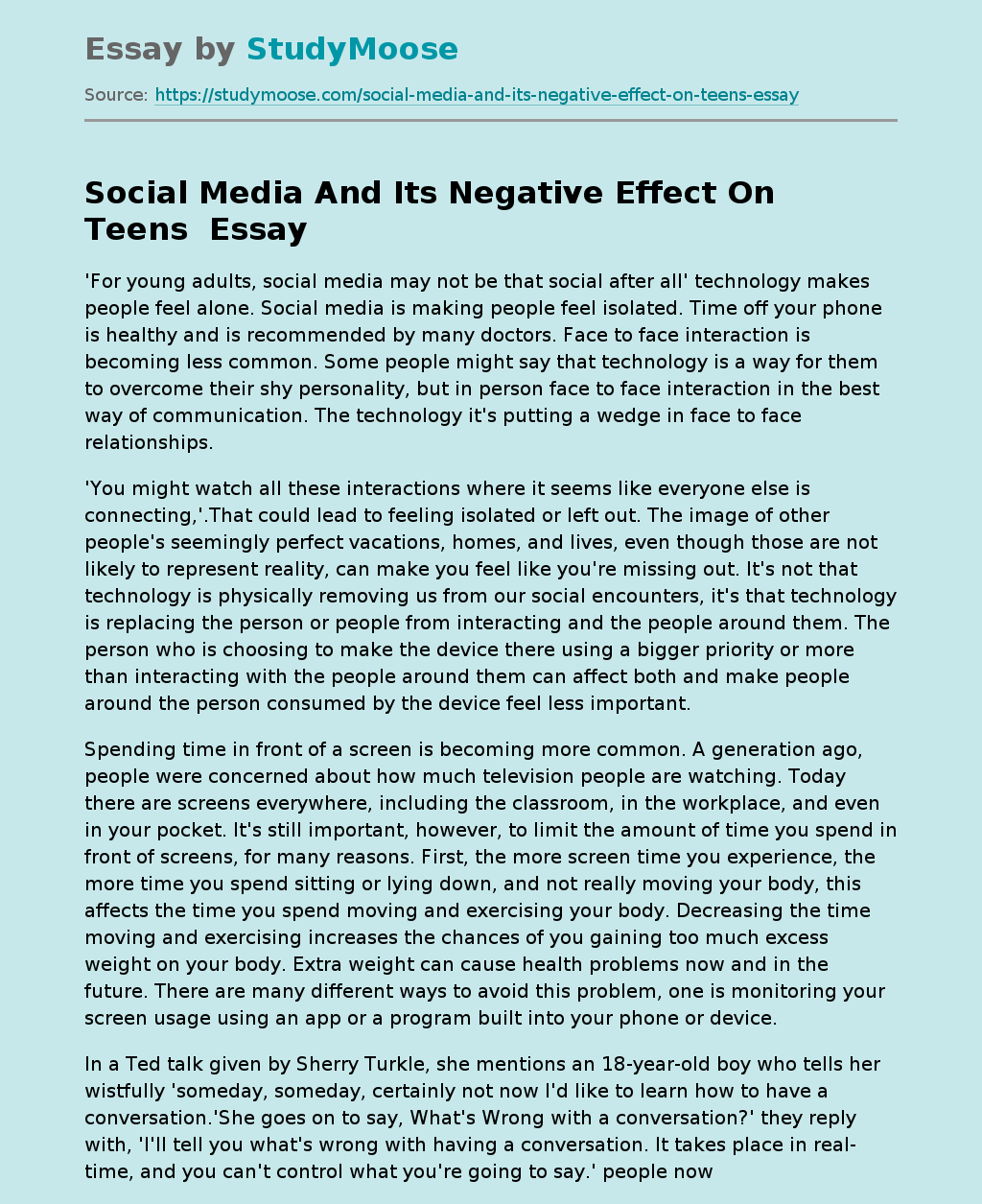