Are Teens Getting High On Social Media?

The obsessive use of social media has a negative impact on the development as well as the present mental state of a teenager. On average, a teenager usually spends up to eight hours a day on social media, when experts say that you should only get “one to two hours max of screen time each day” (Krietz).

Social media is addictive, often taking away from everything in our day to day life. It distracts us from reality and can ultimately lead to procrastination.

Don't use plagiarized sources. Get your custom essay on
“ Are Teens Getting High On Social Media? ”
Get custom paper
NEW! smart matching with writer

It is the new craze right now, and most of the teens are jumping on it right now. Research done at Pew Research Center recorded that 95% of teens have a phone or some electronic that allows them to go on social media. About 45% of teens say they use the internet “almost constantly.” This number doubled from the 24% who said this in the 2014-2015 survey (“Anderson”).

It turns out that emotions expressed on social media can affect an individual’s mood.

This is why it is so addicting. However, it can provoke signs of depression. However, Elise Moreau states that “social media can provoke signs of depression. Exposure to social media has been called, “emotionally contagious” and can even affect your internal health” (Moreau). In addition, there’s a phenomenon called phantom vibration syndrome. It is basically when people think/feel they received a new message on their phone but they really didn’t. This helps support that social media influences our nervous systems as well as our health.

There is no doubt that the constant use of social media can lead to sedentary lifestyles or in other words, lazy habits since social media was proven addictive. In the current century, teenagers have the good ability to have access to loads of information at our fingertips. Hundreds of thousands of photos, videos, status updates, etc. are posted every minute. And teens usually do not want to miss anything. Alice Walton Writes that “the attention span of people have decreased tremendously in last few years. In the year 2000, the average attention span of an Individual was 12 seconds which is down to 8 seconds in 2012” (Walton).

Without question, social media also changes our sleep patterns. It is proven that social media does affect more than sixty percent of teen’s sleep. Social media thrives off the use of their apps, and they get teens engaged by the constant updating. As it can be really easy to continue looking at the particular app as the feeds are keep getting refreshed. One of the biggest concerns about social media in relation to our sleep is the blue light that smartphone screens give off, which basically tricks your brain into thinking that it’s daytime, and keeps you feeling awake when really, you should be sleeping. Harvard Health Publishing of Harvard Medical School says that “any kind of light can reduce how much melatonin (the hormone in your body that controls sleep) your body makes” (School).

Social media also has a negative influence on the development of an individual. According to new research, your constant use of social media might be affecting a teen’s brain more than they know it. It messes with their ability to think independently and makes them worse at multitasking. It also lowers the teen’s self-esteem as they usually feel like someone’s else life is better than their own and they tend to get jealous. A study done by the University of Copenhagen found that “many people suffer from “Facebook envy”, with those who abstained from using the popular site reporting that they felt more satisfied with their lives” (Naruse).

There are many social media platforms online and once a teen signs up for one, their personal information is always there no matter what and can follow and haunt them forever. Anyone’s social media is out for the whole world to see and this could lead to cyberbullying or worse, cyberstalking. Victims may be afraid to report their stalker or bully as they are in constant fear of getting physically or mentally hurt. Researchers have found that “39% of teens fail to enable their privacy settings on social media” (Anderson). This is a good way for pedophilias to start stalking or trying to lure these teens in for their own pleasure.

Also, when a teen applies for a job or even some colleges, they will actually find and look at their social media. According to new data, colleges and universities pay attention to what students post on Twitter, Facebook, and Instagram. “In a Kaplan Test Prep survey of more than 350 college admissions officers in the U.S., 35 percent of officers polled reported having looked at applicants’ social media accounts to learn more about them” (Social).

However, some colleges believe that looking at individuals social media is not ethical. On a survey done online, an anonymous individual writes how “social media is not a true representative of one’s character,” as he or she believes that certain teens only post to fit in, or use slang terms and or abbreviations because some social media has a maximum amount of characters in a single post. This does not mean that the people posting are bad at spelling, or can’t speak correctly. “It’s just the way they display themselves on social media” (Anonymous). But in recent reports, Trudon describe that “it’s all fair game” (Trudon). Your first impression on a college needs to be more than just an essay, a transcript, and some test scores.

Jacqueline Murphy, a professor at Saint Michael’s College, says that while colleges may not always look at your account, other organizations like athletic departments and financial aid offices might take a peek. “I know of at least a couple of occasions here where a student’s application status was compromised by their social media presence when our athletic department did a little more investigation of transfer applicants and found some very damning information,” Murphy says. “Bottom line, you never know who will be looking for you… where and when” (Trudon).

The colleges now are looking for much more than just grades. They want to get to know the person and their personality to see if they are a good fit for their college.

Teens that are always on social media usually ends up comparing with themselves with others which lowers their self-esteem and can negatively affect their mood. This can change their behavior as teens will reflect on social media, as they value it so much. Teens need to be aware of these negatives habits and do something. The constant use of social media is hurting them not just emotionally, but physically. And parents do need to be aware of their child’s screen time as well as what he or she is posting since any person, colleges, and other organizations look at social media to learn more about the individual and their personality.

Are Teens Getting High On Social Media?. (2021, Dec 09). Retrieved from https://studymoose.com/are-teens-getting-high-on-social-media-essay 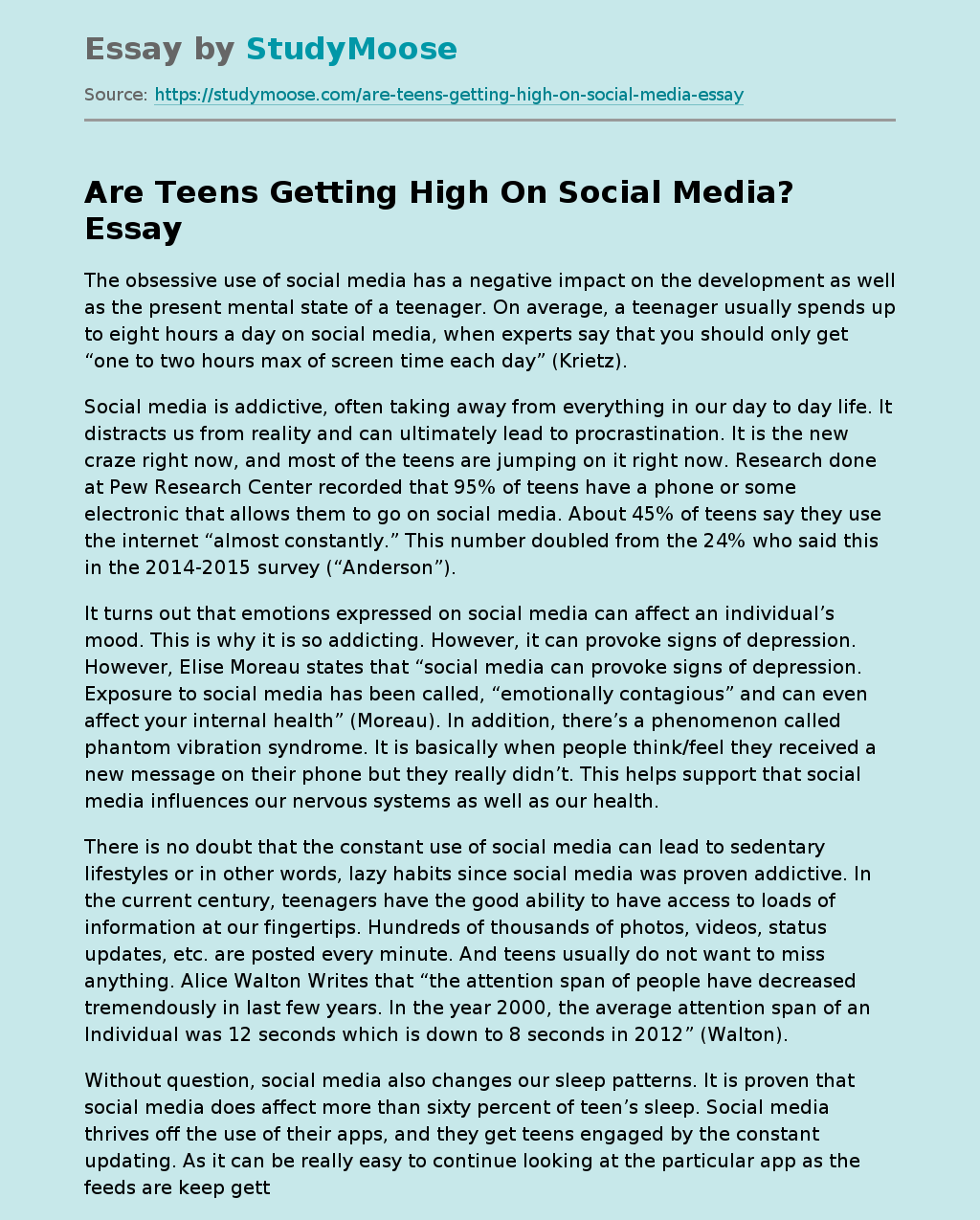